We describe here how to perform colocalization analysis in different endocrine cells of human pancreatic tissue. Immunostained endocrine cells were imaged using high resolution three-dimensional (3D) confocal microscopy. The analysis of the 3D images was performed using Volocity software based on the fluorescence intensity of the different markers acquired in separate channels. The described procedure can be used for colocalization analysis in immunostained tissues other than pancreatic islets. Special attention should be paid to the limits of the imaging resolution and quality for proper colocalization analyses, especially, those involving sub-cellular compartments. Execution of the described procedure will highly depend on the computer processing speed; in our hands, it took a few minutes per islet. However, the overall time of analysis will vary significantly depending on the sampling size to accomplish statistical power of analysis.

Technological advances in microscopy have increased resolution to a point where sub-cellular compartments can be visualized. The new insight about the distribution of different cellular structures such as secretory vesicles has spurred a need for analytical tools to examine and quantify the localization of different cellular components. This type of insight has proven invaluable for structure/function analyses. Using this approach, we recently showed that alpha cells within human pancreatic islets contain acetylcholine-releasing vesicles that do not colocalize with glucagon granules (Rodriguez-Diaz et al., 2011). We performed colocalization analysis on human pancreatic sections immunostained for different cellular components (Fig. 1). The colocalization analysis was performed according to Barlow and colleagues (Barlow et al., 2010) based on the fluorescence intensity of the different endocrine cell and nerve fiber markers acquired in separate channels (i.e., detectors). Colocalization was defined as the detection of a fluorescence signal from two separate channels in the same voxel (3D pixel). We used the Pearson’s Correlation Coefficient as a quantitative measure of colocalization of the different markers.

In brief, sections of human pancreata were co-immunostained either for glucagon and vesicular acetylcholine transporter (vAChT) or insulin and C-peptide. DAPI was used as a nuclear counter-stain. Immunostaining was performed as described previously (Cabrera et al., 2006; Cabrera et al., 2008; Jacques-Silva et al., 2010). The colocalization analysis was performed using Volocity software on z-stacks of high resolution confocal images acquired using a Leica DMLFSA SP5microscope with a 60x oil immersion objective (1.4 numerical aperture). The z-stacks were adjusted to span the full thickness of the pancreatic tissue sections (~40 µm). The x-y resolution ranged from ~20 to 240 nm and the z-resolution was 0.125 – 0.7 µm depending on the zoom factor and the step size in the z-stacks. Different zoom factors were used to image whole islets with varying diameters and the option for “optimized” step size was selected to achieve the highest z-resolution on our equipment. Automatic selection of either, glucagon and vAChT-positive objects (i.e., cells) or insulin and C-peptide-positive objects was based on fluorescence intensity. A threshold value for the detection was set to three standard deviations (3x SD) of the minimum intensity (Barlow et al., 2010). We performed the analysis in two steps: 1) we first found “objects” that were immunoreactive to two of the markers to be colocalized and we created regions of interest (ROIs) based on these objects; 2) we performed the colocalization analysis within these ROIs. To find the objects, a series of preset algorithms (i.e., protocols) available in Volocity was set up (Fig. 2). Selection of the relevant objects was optimized with user feedback by eliminating objects by size (volume). Eliminated objects typically had smaller volume than granules containing endocrine or nerve markers. Colocalization analysis of either glucagon and vAChT or insulin and C-peptide was performed within the ROIs generated from the found objects using 3x SD threshold values for each of the channels (Fig. 3). Thresholded values of the Pearson’s Correlation Coefficient were used for quantification and fitting.

We describe below the step-by-step protocol for the colocalization analysis using Volocity software. In principal, this analysis procedure is applicable to images acquired with fluorescence imaging techniques other than confocal laser scanning microscopy with higher spatial resolution such as Stimulated Emission Depletion microscopy (STED) or Photo-Activated Localization Microscopy (PALM).

Please refer to the figures for representative results.

Shown is an immunostained section (~40 µm) of a human pancreas with DAPI (blue) nuclear counter-stain (a), vAChT (green) (b), and glucagon (red) (c) within an islet. (d) this panel shows an overlay of a – c. (e) Shows an overlay of b and c highlighting compartmentalization of glucagon and vAChT into different granules within alpha cells only. Images are shown as maximum projections of z-stacks of confocal images. Scale bar = 50 µm. 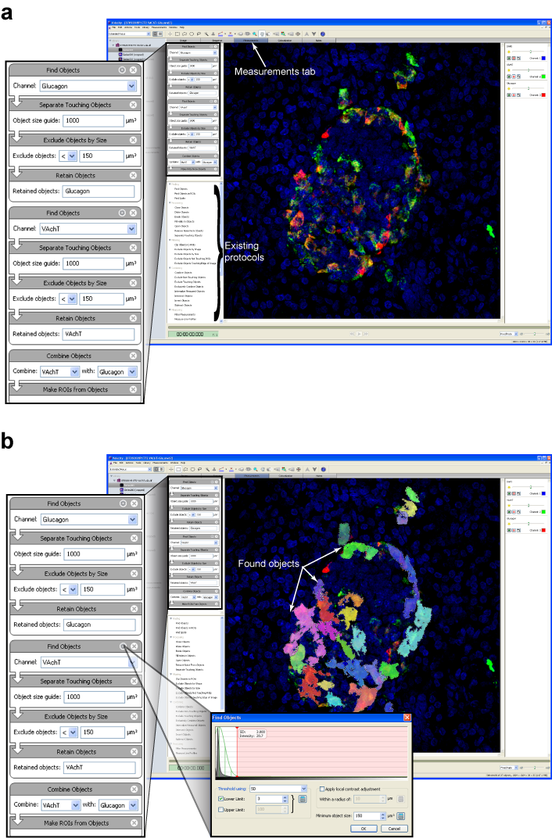 (a) Screenshot showing an islet in the “Measurements” view in Volocity software. The left inset shows a magnified view of the sequence of the analysis protocols (algorithms) to find objects (cells) based on glucagon (red) and vAChT (green) immunostaining intensities. (b) Screenshot showing the results of the protocol sequence as highlighted objects found after executing the protocol sequence. The inset shows the popup window displayed by clicking on the cog icon. In this popup window, threshold values are set to 3x standard deviations (SD) of the minimal fluorescence intensity in the selected channel. Absolute intensity values corresponding to the 3x SD threshold value are displayed on top of the intensity histogram by “mousing” over the lower limit bar (thick red vertical line). 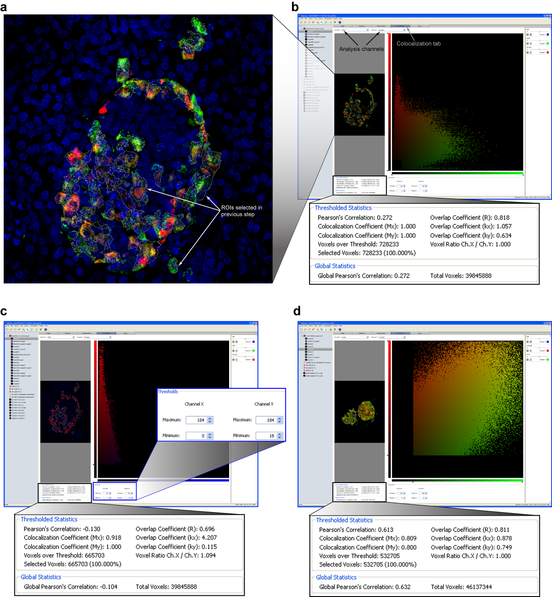 (a) Maximum projection of a z-stack of a confocal image of a human pancreatic islet immunostained for glucagon (red), vAChT (green), and DAPI as nuclear counter-stain (blue). ROIs (outlined) were generated from the glucagon and vAChT-positive objects (i.e., cells) that were found in Steps 4 – 6 of the PROCEDURE and were used for the colocalization analysis using different combinations of channels (2 at a time). (b-d) Screenshots of the “Colocalization” view in Volocity showing the graphical and numerical results of the colocalization analysis performed on glucagon and vAChT (b), glucagon and DAPI (c), and insulin and C-peptide stained islet cells (d). The insets in (b-d) show the “Thresholded” and “Global” or non-thresholded statistics of the colocalization of the selected channels. These results show representative colocalization analysis of partially colocalized glucagon with vAChT (Pearson’s Correlation Coefficient = 0.272), complete segregation of glucagon and DAPI (-0.13), and strong colocalization of insulin with C-peptide (0.613). The upper inset in (c) shows the field where absolute intensity values corresponding to a threshold of 3x SD for each channel are set in Step 8 in the PROCEDURE.