The graphene sheets prepared by chemical reduction of graphene oxide were utilised as the precursor and the graphene film can be obtained by vacuum filtration of the as-synthesised graphene suspension. A pulsed laser engineering approach is developed to prepare the functional graphene film with graphitic nanospheres homogeneously decorated on the surface. As a result of laser engineering process, the as-made graphene film enjoys micro- and nano-scale surface roughness with better stability. Meanwhile, the surface hydrophobicity is enhanced and electric conductivity is improved after laser treatment. The structural parameters of the functional graphene films may contribute to advanced applications in mass spectrometry detection, where laser desorption/ionization mass spectrometry (LDI MS) detection of analytes was performed on the engineered graphene films without using conventional organic matrix. The graphene film is (1) stable with minimum matrix interference; (2) able to provide sufficient surface area and desirable interaction with analyte molecules; (3) electric conductive with high electron mobility and efficient in laser absorbance for desorption/ionization. Consequently, the detection of limit can reach femtomolar level towards diverse molecules in MS analysis.

Graphene materials are rapidly attracting interest due to their unique properties and widely spread applications. (1-4) With recent advances in nanotechnology, various nano-structured materials have been used in irradiation involved area, including graphene based nano-materials. (5-12) Nevertheless, graphene is not stable under strong irradiation conditions. (4, 13-17) For example, the in situ formation of C60 on the surface of graphene under 80 keV electron beam irradiation was observed by Chuvilin et al., (14) and carbon clusters with larger sizes (Cn, n<500) were also observed in the mass spectrometry (MS) spectra of graphene with high intensity during the laser desorption/ionization (LDI) process, (16) which may decrease the detection sensitivity in MS based analysis. Considering the fact that carbon clusters produced from graphene during irradiation may have lower atomic energy (~ -0.26 eV/atom) and thus are more stable compared to graphene, (14) we hypothesise that by introducing stable carbon species homogenously distributed on the surface in situ, engineered graphene products can meet the needs of applications designed in extreme conditions, e. g. intense irradiation for MS detection and imaging. Recently it was found that the functional sites on engineered graphene induced by laser irradiation could be utilized for enhanced electric capacitance. (2, 3) In this protocol, we show that the surface of graphene film can be engineered to provide micro- and nano-scale surface roughness with the increased stability through a pulsed-laser engineering process by forming densely packed graphitic nanospheres (stable under 300 keV electron beam) on the film surface. Moreover, the surface hydrophobicity is enhanced and the electric conductivity is improved.

Matrix assisted laser desorption/ionization (MALDI) MS is one of the fundamental analytical tools in modern bio-analysis, such as early stage disease diagnosis and forensic applications. (18, 19) Despite the substantial progress, the application of MALDI MS towards small molecules is limited because the matrices (normally small organo molecules like α-cyano-4-hydroxycinnamic acid, CHCA) introduce significant background signals during laser ablation in the low molecular range (< 1000 Da). In addition, the sweet-spot effects limit the imaging spatial resolution and detection efficiency. (20, 21) To date, overcoming the low sensitivity of MS based imaging towards small molecules and the preparation of stable functional materials under irradiation represent the key challenges to the field. To address those problems, matrix-free MS techniques have been developed. (5-12, 20-23)

Efficient detection of analytes can be achieved on the engineered graphene films. In the case of AONB, the ion peak of AONB at m/z of 392 [C26H38BrN3-Br]+ was observed with signal strength over 100,000 (8.5 fmol, Figure 4a) and the signal can still be detected consuming 0.85 fmol analytes (Figure 4b). In the case of DOTAP, two peaks with strong intensity at m/z of 662 ([C42H80NO4]+) and 380 ([C42H80NO4-C18H33O2]+) are observed (Figure 4c). The DOTAP signal can be detected on the engineered film comsuming 30 fmol lipids (Figure 4d). The engineered graphene film was also successfully applied to the matrix-free detection of two phosphorous lipids and the detection of limit reached femtomolar level. 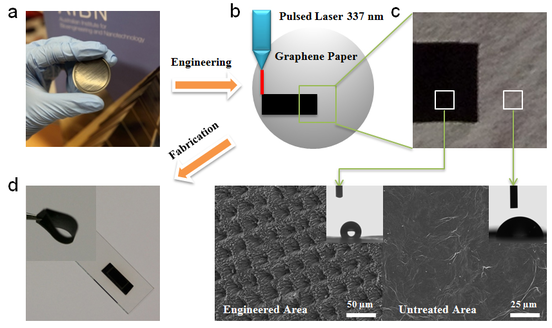 (a) A digital image of the graphene film obtained by filtration of graphene sheets. (b) The graphene film is engineered by pulsed laser irradiation in a selected area. (c) The engineered area (darker black) and untreated area show rough and smooth surface, high and low contact angle, respectively. (d) Digital images of the engineered paper after fabrication, which can be used as a substrate.

Figure 2: X-ray photoelectron spectroscopy characterisation of the graphene paper before and after laser engineering.

(a) Untreated graphene paper. (b) Engineered paper with 50% laser intensity.

Figure 3: SEM and TEM images of the nanospheres on the engineered graphene paper. 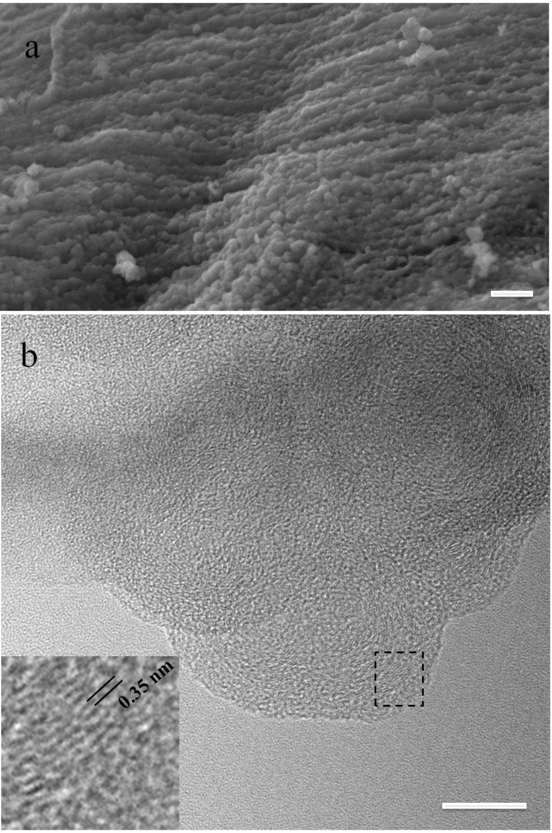 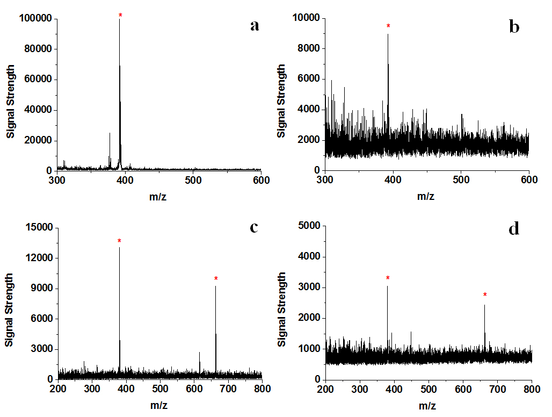