The zebrafish model is a powerful tool for studying developmental and apoptotic processes in vertebrates. Recently we showed the critical role of two members of the Bcl-2 family of proteins during early zebrafish development. Bcl-2 proteins can be localized in different cellular compartments including mitochondria and endoplasmic reticulum and their functional characterization often requires specific subcellular membrane fractionation. Although many protocols describe in detail the subcellular fractionation from cells or tissues, none is specifically tuned to the fractionation from zebrafish embryos. Here we provide a protocol designed for mitochondria and endoplasmic reticulum membrane isolation from zebrafish embryos and subsequent application like mitochondrial calcium uptake. Fractionation is performed by differential centrifugation and distribution of proteins of interest in the corresponding fractions is subsequently analyzed. After the preparation of embryos extracts, the subcellular fractionation requires 4 h and assay for mitochondrial calcium uptake can be performed in 2 h from isolated mitochondria.

Intracellular Ca^2+ concentration represents a key physico-chemical parameter for cell functions and homeostasis. Intracellular Ca^2+ trafficking controls a variety of cellular processes ranging from gene expression to morphogenesis (1). Ca2+ ions are mainly stored in the endoplasmic reticulum (ER) lumen, the mitochondrial matrix and to a lesser extent in the Golgi apparatus and lysosomes. Inside the cell, Ca^2+ concentration is kept at low levels (approximately 100 nM) compared to extracellular medium (1mM) which is ensured by multiple channels, carriers and pumps located to the organelle and plasma membranes (2). Mitochondria are able to stock substantial amounts of calcium in their matrix. Mitochondrial Ca^2+ homeostasis has a key role in the regulation of aerobic metabolism and cell survival; Ca2+ transport though the outer mitochondrial membrane (OMM) is dependent on the voltage-dependent anion channel (VDAC) activity (3,4) while the transport through the inner mitochondrial membrane (IMM) depends on the recently characterized mitochondrial calcium uniporter (MCU) (5,6).

Proteins of the Bcl-2 (B-cell lymphoma 2) family are localized in mitochondria and endoplasmic reticulum and are acknowledged to control Ca2+ fluxes between these organelles which has important consequences beyond the simple control of apoptosis (7).

Recently we characterized two novel Bcl-2 members, named Nrz and Bcl-wav, which are expressed during early zebrafish development. Nrz and Bcl-wav are able to control intracellular Ca^2+ concentration through their interactions with ER and mitochondrial calcium channels, respectively (8-10).

The zebrafish is now acknowledged as an experimental model organism for studying animal development and physiology. A growing number of studies have highlighted the utility of this vertebrate model for studying Ca^2+ trafficking during early embryonic development (11,12). Despite this fact, there is a lack of suitable protocol for purifying zebrafish mitochondria and ER membranes and subsequent Ca^2+ uptake measurements.

During all the experiment, time and temperature are critical. All the steps have to be performed at +4°C if not otherwise stated. Pre-cool all the centrifuges and rotors.

An overview of the protocol is shown in Figure 1.

The time required for the preparation of zebrafish extracts is variable, but is usually between 1 and 2 hours, depending on the number of embryos. Isolation of mitochondria and reticulum endoplasmic membranes usually take about 1.5 hour each. Mitochondrial Ca^2+ uptake analysis can be performed in 2 h from isolated mitochondria.

After fractionation and extraction, quality of the fractionation can be addressed by Western Blot analysis. The purity of the mitochondrial and ER membrane fractions can be controlled by using specific markers. Use Voltage-dependent anion channel (VDAC) for mitochondrial fraction marker which should be absent in ER fraction. For the ER fraction, use Inositol-3,4,5-triphosphate receptor (IP3R) as a marker which should be enriched in this fraction but a weak band could also be detect in the mitochondrial fraction. Specific distribution of a protein of interest in zebrafish cells embryos can be analyzed by western blot (50 µg of total proteins) using these markers. Together, these biochemistry experiments should allow to determine the subcellular localization of the protein of interest.

The effect of the overexpression of a mitochondrial protein or the knockdown of a given gene on mitochondrial Ca2+ homeostasis can be assessed by the measurement of mitochondrial Ca2+ uptake as described. Use NADH (2 mM in KCL buffer) as a control since it abolishes Ca2+ entry into the mitochondria. Analysis of the fit obtained after the maximum of fluorescence intensity is reached will display the relative mitochondrial calcium uptake.

Figure 1: Overview of the protocol 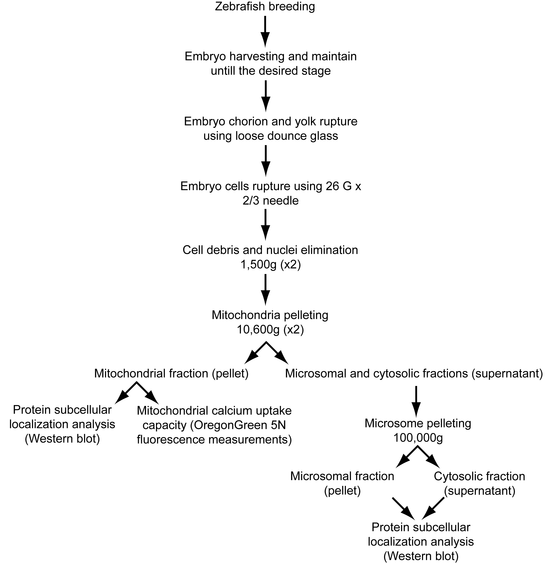