Spectral pattern of urinary water as a biomarker of estrous

Although the assay of hormones associated with the reproductive physiology is essential to estimate the estrous status, the assay takes about one day to process and requires expensive reagents. Therefore, monitoring of additional objective indexes related to estrous is useful for quick determination of the optimal timing for breeding. Here we apply near infrared (NIR) spectroscopy of urine for evaluation of female estrous. Near infrared spectroscopy has been developed as a non-invasive, rapid, and chemical-free tool in biological sciences. We reported that characteristic water absorbance patterns based on 12 specific water absorbance bands in the first overtone wavelength region display high urine spectral variations, suggesting that hydrogen-bonded water structures increase with estrus (1). The result presents the water spectral pattern of urine as a biomarker and near infrared spectroscopy coupled with aquaphotomics as a new platform for estrous diagnosis.

To preserve animals at risk of extinction in the wild and to supply animals for reintroduction projects, captive breeding is accepted as a part of the repertoire available to conservationists. For successful captive breeding, the knowledge on female reproductive physiology, particularly a comprehensive understanding of female estrous patterns is required. Therefore, accurate monitoring of the estrous status is important. Enzyme immunoassay (EIA) or radioimmunoassay have traditionally been used to estimate the optimal ovulation timing by monitoring estrogens in the blood, urine or feces of females (2,3). However, these analyses take about one day to process and require expensive reagents or radioactive isotopes.

A new approach proposed by Tsenkova, called “aquaphotomics” (4,5), utilizes water–light interaction at various frequencies, described as a spectral pattern that mirrors the changes with the rest of the molecules in the system. Multivariate analysis of these spectra focuses on water hydrogen bonds in biological systems under various perturbations to relate water spectral patterns to respective physiological conditions of biological systems (4,6-8). In a series of experiments, near infrared (NIR) spectra were collected, and regression models of respective perturbations were analyzed to elucidate the existence of common water bands in various biological systems such as cells cultured under oxidative stress or in the presence of environmental hormones, and the body fluids of healthy and mastitic cows (7,9). From these results, it was discovered that specific water absorbance bands, called “water matrix coordinates” (WAMACs), arise consistently in various biological systems (4). The combinations of WAMACs and their respective absorbance values define the “water spectral patterns” (WASP) in regression models predicting the investigated perturbations. We describe here, in a detailed protocol, how to find the water spectral pattern to be used as a biomarker for estrous detection and to be based on specific water absorbance bands, WAMACs, related to the estrous status of the animals.

Urine sample is centrifuged for four minutes at 650×g immediately after collection, and the supernatant is stored at −40ºC until estrogen assay and spectral analysis.

Near infrared spectroscopy: 4 min per sample.

Water Matrix Coordinates (WAMACs) Related to Estrous The HCA analysis of urine spectra will group together all urine samples from different years, but at the time of estrous in the same group. The relationship between estrous status and WASP can be examined by comparing the averaged aquagrams per each HCA group. On the averaged aquagram of the estrous samples, the values at WAMACs assigned to the characteristic bands of hydrogen bonded water (S2, S3, and S4; S represents the number of hydrogen bonds, e.g., S0 stands for the free water molecular species (12).), e.g. 1464, 1474, 1494, and 1510 nm in Fig.1, will be higher than the values at the WAMACs assigned to the characteristic bands of less hydrogen bonded water (S0 and S1), e.g. 1344, 1386, 1410, 1424, and 1444 nm, will be lower when compared with other samples of non-estrous state as shown for group 4 in Fig.1. It brings the conclusion that increased absorbance at specific structures of hydrogen bonded water in urine is related to estrous.

The authors would also like to thank the collaborators from the Biomeasurement Technology Laboratory at the Graduate School of Agricultural Science, Kobe University.

Figure 1: Averaged aquagrams based on urine spectra of the groups classified by hierarchical cluster analysis (HCA) 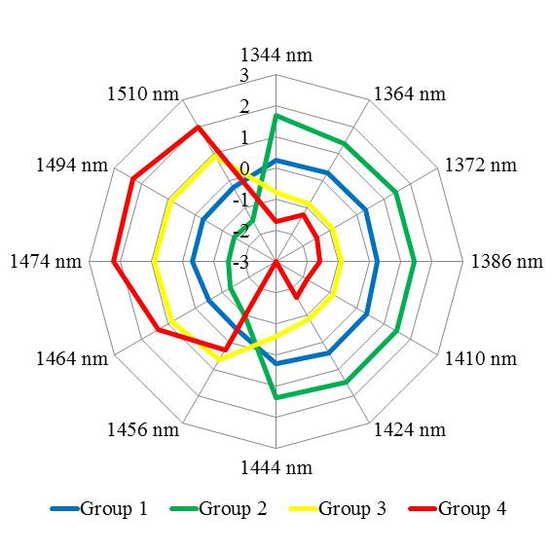