Autism spectrum disorder (ASD) consists of impairment in reciprocal social interaction, impairment in verbal and non-verbal communication, and restrictive and repetitive behaviors and interests (1). Numerous behavioral tasks have been developed to assess these three domains in rodents (2, 3). In the social interaction test, ASD-related behavioral deficits are reflected by a reduction of exploratory behavior toward a novel conspecific (4, 5). In the three-chamber social approach task (6), social deficits are reflected by a lowered level of approach toward a cage that contains a novel mouse.

Preparation of the cage and mice

Two days are required, from preparing the home cage to completion of the recording. The time required depends on the drugs tested (e.g., 3 days are needed when the test mice are treated with rapamycin as described above). Each recording takes approximately 30 min (i.e., 15-min habituation followed by 10-min recording). One mouse per cage can be tested each day using this protocol.

Behaviors other than active interaction can be analyzed according to the interests of the researchers. We also observed an increase in rearing behavior in Tsc1+/- and Tsc2+/- mice (Fig. 3a). The increase was suppressed to control levels by 5 mg kg-1 rapamycin (Fig. 3b). 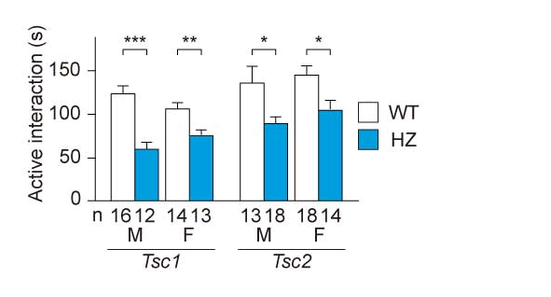 The mice received an intraperitoneal injection of rapamycin or vehicle once daily for 2 days. Active interaction time was then measured in Tsc1 mouse strain (a) and Tsc2 mouse strain (b). In the mutant mice (HZ, blue), active interaction remained lower than wildtype littermates (WT, white) after the injection of vehicle or 2 mg kg-1 rapamycin. Active interaction was normalized in the mutant mice treated with 5 and 10 mg kg-1 rapamycin. Notice that rapamycin had no effects on active interaction time in wildtype mice. Error bars indicate the SEM. The number of mice analyzed is presented in the figure. *P < 0.05, compared with wildtype mice (t-test); #P < 0.05, compared with vehicle (Dunnett’s post hoc test). 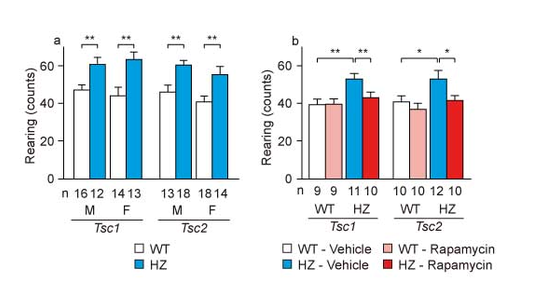 Masashi Mizuguchi, The University of Tokyo