The use of RNAi technology to target the removal of mRNA expression has become a powerful tool in studying protein function (e.g., see references 1 & 2). RNAi technology has several constraints, however, and the more improvements that can be made in the procedure, the more powerful and useful the technique becomes. One drawback has been that RNAi technology has been used primarily to target the knockdown of a single gene. This technology was recently expanded to simultaneously target the knockdown of two or more genes in a variety of organisms by developing vectors for inserting multiple siRNA encoding sequences (3-6). Similarly, as described herein, we have developed a vector for simultaneously targeting the removal of multiple genes in mammalian systems. Another limitation in RNAi technology has been that it examined the role of proteins only by their loss preventing an in-depth analyses of overall function of the targeted protein. To overcome this limitation, several gene replacement strategies that circumvent the RNAi knockdown vector for restoring protein expression have been developed (7-16). Herein, we report that the targeted removal of multiple gene expression can also be complemented by replacement of one or more of the knockdown genes.

Cell culture medium, fetal bovine serum, Lipofectamine 2000, TRIzol reagent, and Hygromycin B were purchased from Invitrogen. Hind III, EcoR I, Xho I, Mfe I, BamH I and Quick Ligation Kits were obtained from New England BioLabs and QuickChange® Site-Directed Mutagenesis Kit from Stratagene. The mammalian cell expression vector, pcDNA3.1, was purchased from Invitrogen, and pSilencer 2.0 U6 vector was from Ambion. All other chemicals and reagents were obtained commercially and were products of the highest grade available. Mouse embryonic fibroblast, NIH 3T3 cells were obtained from ATCC. DT cells, which encode oncogenic k-ras, were derived from NIH 3T3 cells (17, 18) and were obtained as given (19).

Do not use the Mfe I and Xho I sites for inserting the siRNA targeting sequences. These two sites will be used to combine multiple siRNA cascades into one vector.

A representative experimental output is shown in Figures 2 and 3 for targeting the expression of SECp43, which is involved in selenoprotein synthesis (20,21), phosphoseryl-tRNA[Ser]Sec kinase (PSTK), which phosphorylates the seryl moiety on seryl-tRNA[Ser]Sec is an intermediate in selenocysteine synthesis (22,23), and the selenoproteins, thioredoxin reductase 1 (TR1) and glutathione peroxidase 1 (GPx1). In Figure 2, constructs encoding siSECp43 and siPSTK were stably transfected into NIH 3T3 cells and the expression of the corresponding mRNAs examined by northern blotting. Lane 1 shows that SECp43 has been effectively removed using a single siSECp43 targeting construct and lane 2 shows that PSTK was also effectively removed using a single siPSTK targeting construct. Lane 3 shows that SECp43 and PSTK were effectively and simultaneously removed using a siPSTK/siSECp43 double knockdown construct in which the two targeting regions are connected in tandem. In Figure 3, DT cells were stably transfected with a control construct, pU6, or with the siTR1/siGPx1 double knockdown construct and then transiently transfected with different expression vectors, the cells labeled with 75Se and the resulting labeled selenoproteins analyzed following electrophoresis of cell extracts. Lane 1 shows the expression of selenoproteins in cells stably transfected with the control vector and lane 2 shows that both TR1 and GPx1 were effectively removed by the double targeting vector. Re-introduction of the TR1 or GPx1 wild type genes did not result in expression of these proteins due to the presence of the corresponding siRNAs generated from the stably transfected vector (lanes 3 and 5), but these proteins were expressed in cells transiently transfected with the vectors carrying TR1 and/or GPx1 genes with mutations in the regions corresponding to the siRNAs in order to circumvent the targeting regions (lanes 4, 6, 7).

Development of a construct encoding multiple siRNAs targeting genes for their simultaneous removal expands the usefulness of the already established powerful tool of RNAi technology. It provides a simple, rapid and effective means of generating stably transfected siRNA cell lines. Furthermore, this approach permits us to target a variety of genes to elucidate their possible interplay and/or their loss on cell function and broadens our approaches in therapeutic strategies. The fact that we can also replace gene expression either individually or collectively provides an alternative means of assessing the interplay of different proteins as well as their individual or collective effect on overall cellular function.

Figure 1: Scheme for the tandem alignment of multi-siRNA sequences.

Each siRNA was cloned separately into the modified pSilencer 2.0 U6 vector. The 4.8 kb siRNA construct (designated pU6-siRNA1) was digested with Xho I/ Mfe I and the Xho I/ EcoR I siRNA2 fragment, which had been released from another siRNA construct, inserted into the pU6-siRNA1 construct generating a 5.3 siRNA construct (designated pU6-siRNA1/siRNA2). EcoR I and Mfe I have compatible cohesive ends, and following ligation, the new site cannot be re-cut by either endonuclease. Additional siRNA units can then be individually added to the pU6-siRNA using the same strategy. 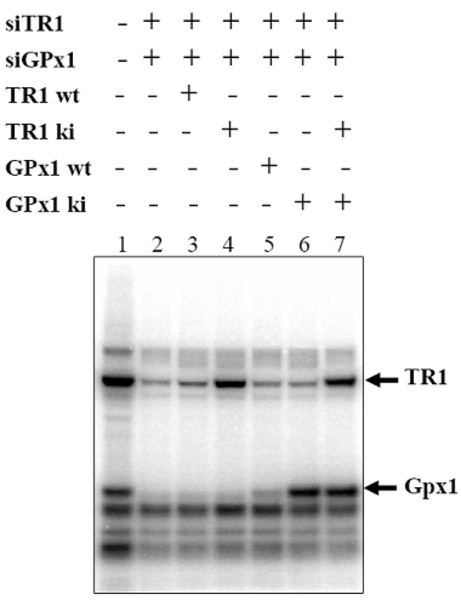