Long-term monitoring of cellular activities of neurons is crucial to understand brain functions in mammals. However, current in vivo monitoring systems such as PET or fMRI are still far from focusing cellular functions, while in vitro monitoring using cultured brain slices presents sometime outcomes difficult to interpret in reference to a specific brain function. With respect to the latter issue, circadian rhythms (ca. 24 h rhythms), is unique. Circadian rhythms are detected not only in a single organism but also in cells and tissues, which enables us to analyze the brain in vitro without missing a functional marker.

In mammals, the central clock which generates circadian rhythm and entrains to environmental time cues is located in the suprachiasmatic nucleus (SCN) of the hypothalamus (1, 2). The unilateral SCN contains about 10,000 neurons (3) and individual SCN neurons show circadian rhythms in electrical activity, cytosolic Ca2+, and gene expressions (4-9). However, specific cell networks are required for the expression of circadian rhythm in a tissue level, namely for functioning as the SCN circadian pacemaker. A current hypothesis of circadian rhythm generation in a single cell is a molecular feedback loop composed of several clock genes, such as Period (Per), Cryptochrom (Cry), Clock and Bmal1, and their protein products. The molecular oscillation transmits circadian signals to other cellular functions such as membrane potential and finally to behavioral activity rhythms. In turn, signals from other SCN cells modify the molecular oscillation through intracellular signal transduction (10). To understand the structure and functions of circadian pacemaker in the SCN, a sequential events happing in a single oscillating cell and cellular communication in the SCN should be monitored.

Recently, we established simultaneous and long-term measurement of clock gene expression, (Per1) or clock gene product (PER2) and electrical activity at a single cell level in a cultured mouse SCN slice (11). We monitored clock gene expression and clock gene product by means of bioluminescence imaging using a luciferase reporter and electrical activity using a Multi-electrode array dish, respectively (11-14). The protocol provides useful information to scientists who are interesting in cell and tissue level events not only related to the brain but also other bodily functions.

For long-term and simultaneous measurements of neuronal activity and bioluminescence from the SCN, the MED probe should be prepared with special care.

The protocols and results present the relationship between clock gene expression and its output signal, neuronal activity rhythms, in the SCN slice. This methods enable us to measure gene expression and neuronal activity of neuron of interest simultaneous at real-time for several weeks without medium exchange. Responses of the two parameters can also be monitored simultaneously to various kind stimuli, e.g. by passing electric currents of desired frequency and amplitude to the selected electrode and by applying drugs. Optical tools can also be applied, such as caged compounds and optogenetics. 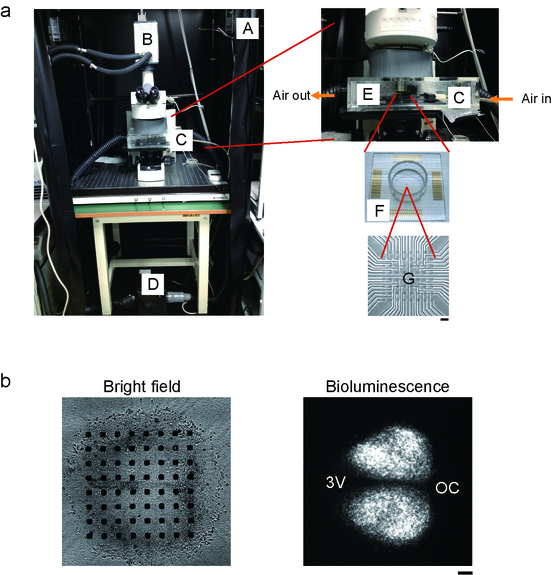 (a) The photograph indicates simultaneous recording system in the dark box (A). A CCD camera (B) is installed at the top port of an upright microscope. A stage-top incubator made of acrylic glass (C) is warmed at 37ºC by a heating system (D). An MED connector (E) is put in the stage-top incubator of the microscope. An MED probe (F) and 64 electrodes (G), each 20×20 µm in size, are arranged in the center area of 0.7 mm x 0.7 mm of the MED probe. The MED probe is sealed with oxygen permeable film and set to the MED connector to monitor membrane potential. (b) Bright field (left) and Per-1luc bioluminescence (right) images of cultured SCN slice on an MED probe. A scale bars are 100µm. 3V: Third ventricle. OC: Optic chiasm.

Table 1: The ingredients of buffer for collagen solution

Table 2: The ingredients of supplements for DMEM medium (x20 solution)