The Reproducibility Project: Cancer Biology seeks to address growing concerns about reproducibility in scientific research by conducting replications of 50 papers in the field of cancer biology published between 2010 and 2012. This Registered report describes the proposed replication plan of key experiments from ‘The CD47-signal regulatory protein alpha (SIRPa) interaction is a therapeutic target for human solid tumors’ by Willingham et al., 2012, published in PNAS in 2012. The key experiments being replicated are those reported in Figure 6A–C and Table S4. In these experiments, Willingham et al., 2012 test the safety and efficacy of anti-CD47 antibody treatment in immune competent mice utilizing a syngeneic model of mammary tumor growth in FVB mice. The Reproducibility Project: Cancer Biology is a collaboration between the Center for Open Science and Science Exchange, and the results of the replications will be published in eLife.

Phagocytosis is an essential process utilized by an organism for pathogen or apoptotic cell clearance (Poon et al., 2014). CD47 is a cell surface glycoprotein with a variety of functions including regulation of phagocytosis through binding to the macrophage and dendritic cell specific protein signal regulatory protein alpha (SIRPα) (Oldenborg, 2013). Binding of SIRPα to CD47 essentially sends a ‘don't eat me’ message to macrophages by initiating signaling to inhibit phagocytosis (Murata et al., 2014).

Increased expression of CD47 is proposed to be a mechanism through which cancer cells evade immune detection and phagocytosis. CD47 expression is increased in several cancer types including acute myeloid leukemia (AML), acute lymphoblastic leukemia (ALL), non-Hodgkin lymphoma (NHL), primary effusion lymphoma, multiple myeloma, leiomyosarcoma, and bladder cancer, and targeting of CD47 on cancer cells with an anti-CD47 blocking antibody can promote phagocytosis by macrophages in vitro (Chan et al., 2009; Jaiswal et al., 2009; Majeti et al., 2009; Chao et al., 2010a; Edris et al., 2012). Further, treatment with an anti-CD47 blocking antibody synergized with rituximab treatment to promote phagocytosis in vitro and to eliminate cancer cells in an in vivo xenograft model of non-Hodgkin lymphoma (Chao et al., 2010b). This is supported in two syngeneic murine tumor models, in melanoma and squamous cell carcinoma, where irradiation combined with antisense suppression of CD47 delayed tumor growth (Maxhimer et al., 2009). Willingham et al., 2012 further extend these results to demonstrate that CD47 expression increases in a variety of human solid tumor types and that blocking the SIRPα/CD47 interaction with an anti-CD47 antibody can promote phagocytosis of solid tumor cells in vitro and reduce growth of solid tumors in vivo. While it is not clear if SIRPα signaling is involved in the antitumor activity of an anti-CD47 antibody, these results indicate that anti-CD47 antibody therapy may be an effective treatment for a variety of solid tumor types (Soto-Pantoja et al., 2012).

This experiment tests the safety and efficacy of anti-CD47 antibody treatment in immune competent mice using a syngeneic model of mammary cancer. This experiment replicates figures 6B, 6C, and table S4 of the original article, which assess tumor growth by weight of the tumor 30 days after implantation, lymphocytic infiltration by immunohistochemistry, and toxicity by blood analysis.

All known differences are indicated by an asterisk, with the originally used item listed in the comments section. 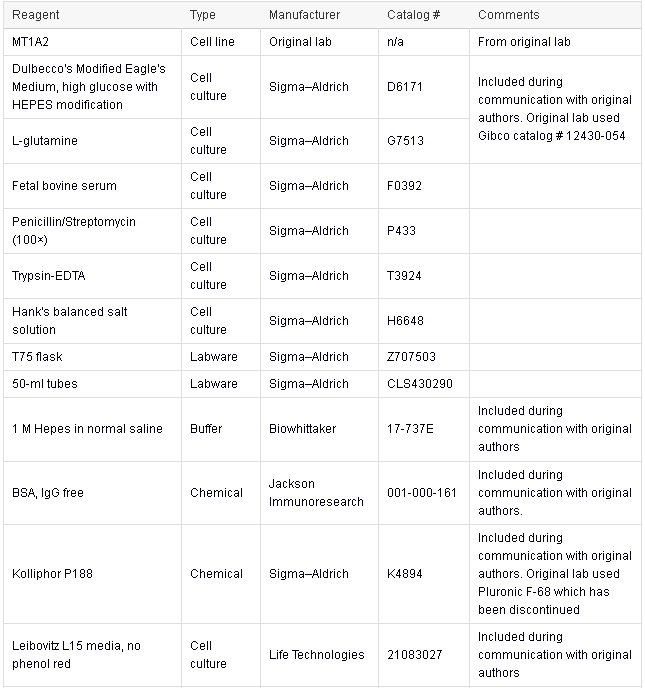 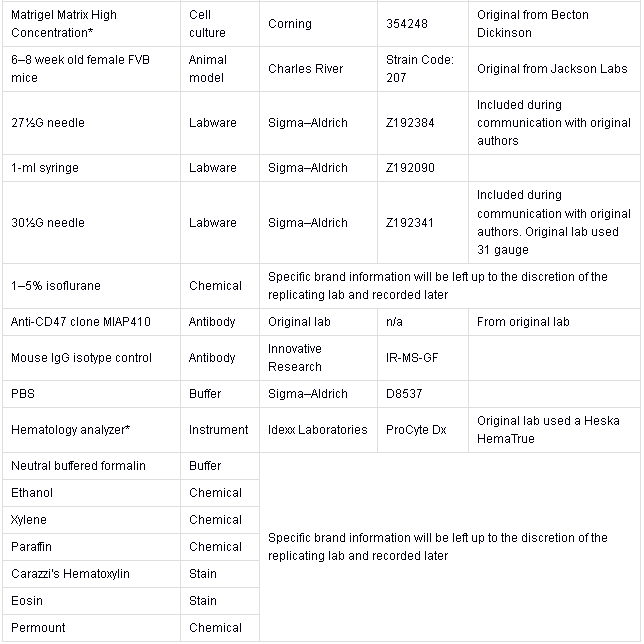 This experiment assesses if treatment with an anti-CD47 therapeutic antibody alters breast tumor growth in immune competent hosts and examines the safety of the treatment by looking at blood toxicity. The histological analysis of lymphocytic infiltration of the tumors will be reported for each tumor generated during the study, along with the H&E stained sections. This replication attempt will perform the following statistical analysis.

Known differences from the original study

The replication attempt will not include the anti-CD47 clone MIAP301. The replication attempt will analyze lymphocytic infiltration of the tumors using a scoring system of the H&E stained sections, which was not implemented by the original study, and is included as exploratory analysis. Toxicity will be assessed during the course of the efficacy experiment instead of on a different strain and cohort of mice as the original study, which was determined in BALB/c mice. Additionally, the replication study will analyze blood 5 days after the beginning of antibody treatment, which precedes a total of three antibody treatments at a dose of 400 µg/injection. This is similar to the original study, which analyzed blood 5 days after two successive daily antibody injections of 500 µg/injection. To determine the baseline reading, untreated female FVB mice will be also be analyzed. The Idexx Laboratories ProCyte Dx hematology analyzer will assess the same parameters as the Heska HemaTrue used in the original study. All known differences of materials and reagents are listed in the ‘Materials and reagents’ section above, indicated by an asterisk, with the originally used item listed in the comments section. All differences have the same capabilities as the original and are not expected to alter the experimental design.

The original study analyzed the data using a Student's t-test, however since the original data variance is not homogenous the Welch's t-test for comparing the samples will be used instead.

The cell line used in this experiment will undergo STR profiling to confirm its identity and will be sent for mycoplasma testing to ensure there is no contamination, as well as rodent pathogen screening to ensure there are no detectable pathogens. The anti-CD47 clone MIAP410 will be checked to verify the specificity by ELISA, which is being conducted by the original lab. The retro-orbital bleeds will be performed by a Science Exchange lab with expertise in this technique to minimize stress. Subjective data collection will be performed blinded to the experimental conditions and treatment groups will be assigned in a random manner with the seed number recorded to reproduce the plan. All of the raw data, including the H&E stained sections, will be uploaded to the project page on the OSF (https://osf.io/9pbos) and made publically available.

↵* The IgG control group SD was used as the divisor.

↵† The original data did not detect a statistically significant interaction or treatment main effect, making these the detectable effect size with 80.0% power.

↵‡ The original data reported a statistically significant effect for the hematology parameters, which the replication is powered to 99.9% to detect. This is the detectable effect size with 80% power. 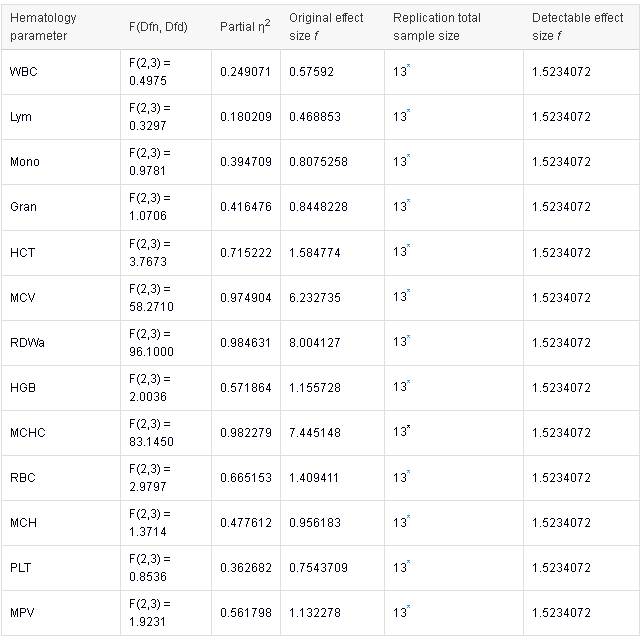 The Reproducibility Project: Cancer Biology core team would like to thank the original authors, in particular Stephen Willingham and Jens-Peter Volkmer, for generously sharing critical information as well as reagents to ensure the fidelity and quality of this replication attempt, as well as Frank Graham and McMaster University for facilitating the transfer of MT1A2 cells. We thank Courtney Soderberg at the Center for Open Science for assistance with statistical analyses. We would also like to thank the following companies for generously donating reagents to the Reproducibility Project: Cancer Biology; American Type Culture Collection (ATCC), BioLegend, Cell Signaling Technology, Charles River Laboratories, Corning Incorporated, DDC Medical, EMD Millipore, Harlan Laboratories, LI-COR Biosciences, Mirus Bio, Novus Biologicals, Sigma–Aldrich, and System Biosciences (SBI).