The Reproducibility Project: Cancer Biology seeks to address growing concerns about reproducibility in scientific research by conducting replications of 50 papers in the field of cancer biology published between 2010 and 2012. This Registered Report describes the proposed replication plan of key experiments from “Melanoma genome sequencing reveals frequent PREX2 mutations” by Berger and colleagues, published in Nature in 2012 (Berger et al., 2012). The key experiments that will be replicated are those reported in Figure 3B and Supplementary Figure S6. In these experiments, Berger and colleagues show that somatic PREX2 mutations identified through whole-genome sequencing of human melanoma can contribute to enhanced lethality of tumor xenografts in nude mice (Figures 3B, S6B, and S6C; (Berger et al., 2012). The Reproducibility Project: Cancer Biology is a collaboration between the Center for Open Science and Science Exchange, and the results of the replications will be published by eLife.

Melanoma is a highly aggressive tumor with poor prognosis in the metastatic stage. Based on their association with UV-induced DNA damage, melanomas are often hypermutated, and considerable efforts have been made to sequence such tumors in order to better understand their molecular basis. Many well-known oncogenes are frequently involved in melanoma pathogenesis, including BRAF and NRAS, and significant work has been done to develop targeted kinase inhibitors against these targets (Kunz, 2014). However, even with treatment, melanoma has an extremely high rate of recurrence; thus, there is great interest in identifying novel candidate genes that promote oncogenesis in melanoma, thereby providing additional therapeutic targets.

Berger and colleagues chose to analyze six representative PREX2 mutations derived from their whole-genome sequencing screen. These variants included three truncation variants and three non-synonymous point mutations predicted to carry functional impact. These mutant PREX2 constructs were packaged into lentiviruses and transduced into TERT-immortalized human melanocytes engineered to express NRAS^G12D. Ectopic expression of various mutant PREX2 isoforms was confirmed by Western blot (Figure S6A). These experiments will be replicated in Protocols 1 and 2. Berger and colleagues next transplanted the melanocytic lines into immunodeficient mice alongside control melanocytes expressing either wild-type PREX2 or GFP (green fluorescent protein). They found that overexpression of all three truncated variants, as well as the point mutation G844D, significantly accelerated tumor growth in vivo, thus affirming the biological relevance of their genomic data (Figures 3B, S6B, and S6C). These key experiments, which support the hypothesis that mutant PREX2 promotes oncogenesis in melanoma, will be replicated in Protocol 3.

There is some debate over which mutations observed in various melanoma samples are biologically relevant, including PREX2. Potentially, mutational heterogeneity across tumor samples may contribute to false-positive findings (Lawrence et al., 2013). Various genome-wide screens have yielded conflicting results about which genes are frequently mutated in melanoma. Recently, mutated PREX2 was identified in both the primary tumor and in metastatic tumor tissue from a genomic analysis of a single melanoma patient (Furney et al., 2014; Turajlic et al., 2012). However, five studies failed to identify PREX2 in their genome-wide melanoma screens, including a meta-analysis study that analyzed hundreds of published datasets (Hodis et al., 2012; Krauthammer et al., 2012; Marzese et al., 2014; Ni et al., 2013; Xia et al., 2014). To date, there have been no replication attempts assessing the biological significance of PREX2 mutant isoforms in melanoma.

This protocol describes the generation of pMEL/hTERT/CDK4(R24C)/p53DD/NRAS^G12D (NRASG12D) melanocytes that stably express various mutated forms of PREX2. This protocol details the production of lentivirus for each mutated PREX2 form, as well as the viral transduction of melanocytes and selection for stable-expressing lines using antibiotic resistance. 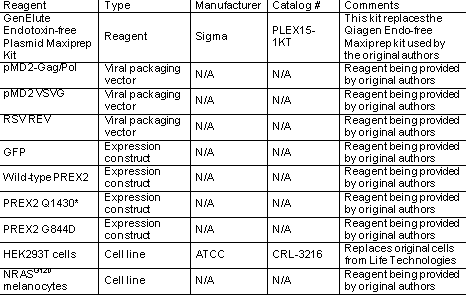 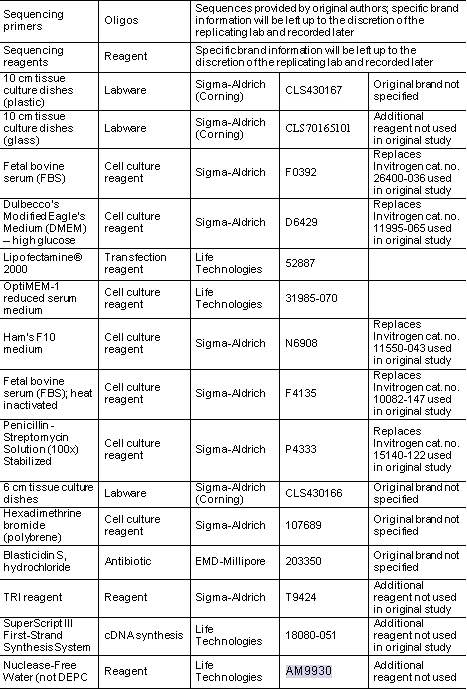 Note: All cell lines will be sent for STR profiling and mycoplasma testing.

This replication is only generating stable melanocyte lines for GFP, wild-type PREX2, PREX2 Q1430, and PREX2 G844D. The original study also included several other PREX2 mutants, including PREX2 K278, E824*, P948S, and G106E. This replication will include the additional step of sequencing the endogenous PREX2 gene in the NRAS^G12D melanocyte cell line to determine its mutational status. All known differences in reagents and supplies are listed in the materials and reagents section above, with the originally used item listed in the comments section. All differences have the same capabilities as the original and are not expected to alter the experimental design.

The cell line used in this experiment will undergo STR profiling to confirm its identity and will be sent for mycoplasma testing to ensure there is no contamination. PREX2 expression constructs obtained from the original authors will be verified for sequence identity and DNA integrity. The endogenous mutational status of PREX2 in NRAS^G12D melanocytes will be assessed. All data obtained from the experiment will be made publicly available, either in the published manuscript or as an open access dataset available on the Open Science Framework (https://osf.io/jvpnw/). 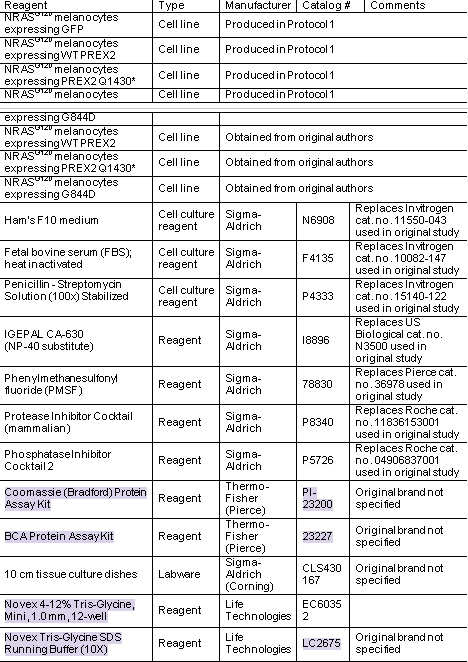 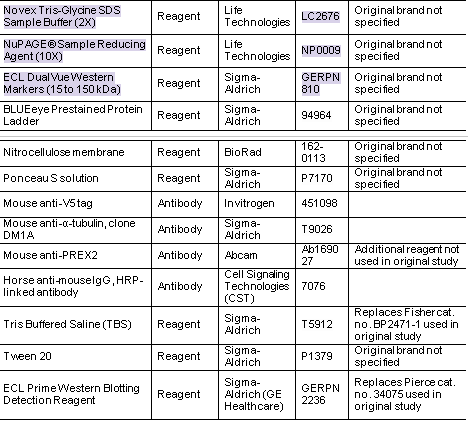 This replication is only analyzing protein expression from cell lines engineered to express GFP, wild-type PREX2, PREX2 Q1430, and PREX2 G844D. The original study also included several other PREX2 mutants, including PREX2 K278, E824*, P948S, and G106E. This replication includes an antibody probing for PREX2, so that we can better determine its endogenous expression level. Additionally, we are also testing protein expression in the original PREX2 cells lines derived by the original authors, so that we can compare expression levels between the original lines and the replication lines. All known differences in reagents and supplies are listed in the materials and reagents section above, with the originally used item listed in the comments section. All differences have the same capabilities as the original and are not expected to alter the experimental design.

The endogenous expression of PREX2 will be assessed in cell lines not overexpressing PREX2 variants. An image of Ponceau-stained membranes (post-transfer) will be included to verify successful protein transfer. All of the raw data, including the image files and quantified bands from the western blot, will be uploaded to the project page on the OSF (https://osf.io/jvpnw/) and made publically available. This experiment is also the quality control for the other replication protocols as it assesses the levels of ectopic PREX2 variant expression in the utilized cell lines.

This protocol assesses the propensity of ectopically expressed PREX2 mutations to accelerate tumor formation of immortalized human melanocytes in vivo. This protocol utilizes stably-transfected NRAS^G12D human melanocyte lines that were previously generated and analyzed in Protocols 1 and 2. The melanocytic lines are transplanted into immunodeficient mice alongside control melanocytes expressing wild-type PREX2 or GFP (green fluorescent protein). Tumor growth is assessed for 16 weeks, and tumor-free survival is monitored, as depicted in Figure 3B and S6B. Further, confirmatory staining and analysis of tumor tissue will be completed, as depicted in Figure S6C. 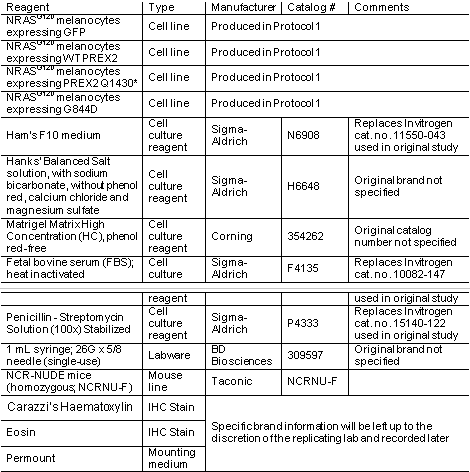 Data to be collected:

This replication attempt will perform the statistical analyses listed below, compute the effects sizes, compare them against the reported effect size in the original paper and use a meta-analytic approach to combine the original and replication effects, which will be presented as a Forest plot.

This replication is only generating and analyzing xenografts based on the stable melanocyte lines for GFP, wild-type PREX2, PREX2 Q1430, and PREX2 G844D. The original study also generated and analyzed tumor xenografts using other PREX2 mutant-expressing melanocyte lines, including PREX2 K278, E824*, P948S, and G106E. In order to sufficiently power all experiments and achieve the necessary number of events for Kaplan–Meier analysis, the duration of this replication will be extended from 9 weeks in the original paper to 16 weeks in the replication. All known differences in reagents and supplies are listed in the materials and reagents section above, with the originally used item listed in the comments section. All differences have the same capabilities as the original and are not expected to alter the experimental design.

The genetic integrity, mycoplasma-free purity, and levels of exogenous expression of each NrasG12V melanocyte line used in this experiment have been previously validated in Protocols 1 and 2. All mice will be handled and housed in accordance with the Institutional Animal Care and Use Committee (IACUC). All data obtained from the experiment - raw data, data analysis, control data and quality control data - will be made publicly available, either in the published manuscript or as an open access dataset available on the Open Science Framework (https://osf.io/82nfe/)

The Reproducibility Project: Cancer Biology core team would like to thank the original authors, in particular Levi Garraway, Lynda Chin, and most especially Yonathan Lissanu Deribe, for generously sharing critical information as well as reagents to ensure the fidelity and quality of this replication attempt. We are grateful to Courtney Soderberg at the Center for Open Science for assistance with statistical analyses. We would also like to thanks the following companies for generously donating reagents to the Reproducibility Project: Cancer Biology; BioLegend, Charles River Laboratories, Corning Incorporated, DDC Medical, EMD Millipore, Harlan Laboratories, LI-COR Biosciences, Mirus Bio, Novus Biologicals, and Sigma-Aldrich.

We disclose that EI, FT, and JL are employed by and hold shares in Science Exchange Inc. The experiments presented in this manuscript will be conducted by SR at the UC Davis Mouse Biology Program and CW at Reveal Biosciences, which are Science Exchange-associated labs. No other authors disclose conflicts of interest related to this manuscript.

The Reproducibility Project: Cancer Biology is funded by the Laura and John Arnold Foundation, provided to the Center for Open Science in collaboration with Science Exchange. The funder had no role in study design or the decision to submit the work for publication