The Gram-positive bacteria which are cultured under pyrogen-free conditions are free of LPS contamination, as verified by their inability to cause degranulation of the horseshoe crab hemocytes.

Figure 1: Gram-positive bacteria do not cause degranulation of the horseshoe crab hemocytes. 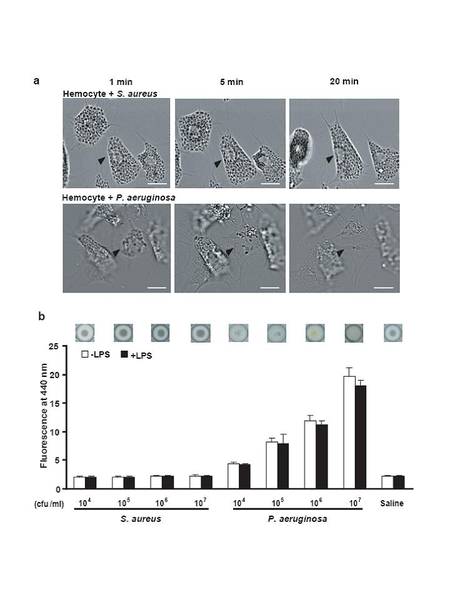 (a) Morphological examination of hemocytes in contact with Gram-positive bacterium S. aureus and Gram-negative bacterium P. aeruginosa. One μl hemolymph was applied to a glass slide and immediately mixed with 1 μl of 107 cfu/ml bacteria under examination. The hemocytes were monitored under bright-field with Zeiss fluorescence microscope. Time-lapse microscopy image of the hemocytes were taken at 30 s intervals for 20 min. (b) Factor C activity was assayed to indicate whether the hemocytes had degranulated. Samples were tested with and without LPS, in case Factor C was exocytosed in its inactive precursor form. The histobars show dose-dependent increase in the fluorescent product formed by increasing levels of LPS which activated the Factor C. The inset shows that after incubation with S. aureus, hemocytes aggregated at the bottom of pyrogen-free borosilicate glass tube appearing as a dense button of cells. In contrast, P. aeruginosa, a Gram-negative bacterium with LPS, caused hemocyte degranulation, thus, the absence of such aggregation of hemocytes as they were degranulated. Scale bar, 10 μm in (a). A larger version of this image can be found here: Figure 1.pdf