Multi-component macromolecular complexes such as ribosome complexes are prone to significant heterogeneity within in vitro reconstituted samples. This can make functional and structural studies difficult, especially in the case of transiently assembling complexes. Translation initiation in prokaryotes proceeds through the formation of transient initiation complexes of the ribosome with initiation factors IF1, IF2 and IF3. The formation of the 30S initiation complex (30SIC) is accomplished in the very early phase of translation initiation, before the actual protein synthesis starts. In order to investigate the structure of the complex comprising the 30S ribosomal subunit, mRNA, fMet-tRNAfMet, IF1 and GTP-bound IF2, we have purified the components and characterized the complex formation by filter-binding assays. This was done with the aim of obtaining a high degree of homogeneity of the complex as desirable for structural studies such as by cryo-electron microscopy (cryo-EM). Here we provide a protocol for the purification of the IFs and for the monitoring of their binding activity by nitrocellulose filter-binding assays using a radio-labelled tRNA. This procedure allows investigating the influence of the different protein factors and of the Mg2+ concentration on the formation of the initiation complex in order to optimize the stochiometry of each component.

A. Purification of initiation factors IF1 and IF2

Using the following protocol, the stability of 30S and 70S initiation complexes can be tested in order to obtain homogeneous complexes for cryo-EM studies (Myasnikov et al., 2005; Simonetti et al., 2008, in press). Before starting the filter-binding assay, the 30S ribosomal subunits are activated in buffer F at 37°C for 30 minutes. After ribosome activation the reaction mixture is prepared as follows:

IF1 purification: one can avoid the heating step by going directly to the following anion exchange chromatography step.

Examples of the results obtainable with this method for the 30SIC are shown in the Figure. The setup can become the basis for a large screening assay (for example titration with Mg++, NH4+ ions or various component like mRNA with different Shine-Dalgarno sequences). In this case, the binding reactions described previously are adapted to a microtiter format. This can be obtained using a 96-well microtiter filter unit (Multiscreen HTS Millipore MSHVN4B10) connected to a Millipore XX5522050 vacuum pump as described by Brandi et al. (2007).

We thank Jill Thompson (Brown University, Providence, Rhode Island, USA) for providing IF2 strains, Manuela Argentini for mass spectroscopy analysis of IF1 and IF2, and Gulnara Yusupova for her support. This work was supported by grants from the Centre National pour la Recherche Scientifique (CNRS), the Ministère de la Recherche et de la Technologie (ACI BCMS), the European Molecular Biology Organization (EMBO) Young Investigator Programme (YIP), the Institut du Développement et des Ressources en Informatique Scientifique (IDRIS, France), and the European Commission as SPINE2-complexes (contract n_ LSHG-CT-2006-031220). A.S. is PhD student in a co-tutorial between Université Louis Pasteur (ULP), Strasbourg, and Università di Camerino, and was supported by SPINE2-complexes, by the Institut National de la Santé et de la Recherche Médicale (INSERM) and the Fondation de la Recherche Médicale (FRM). S.M. was supported by postdoctoral fellowships from the ULP, CNRS and from the FRM, and A.G.M. was a recipient of postdoctoral fellowships from CNRS and FRM. 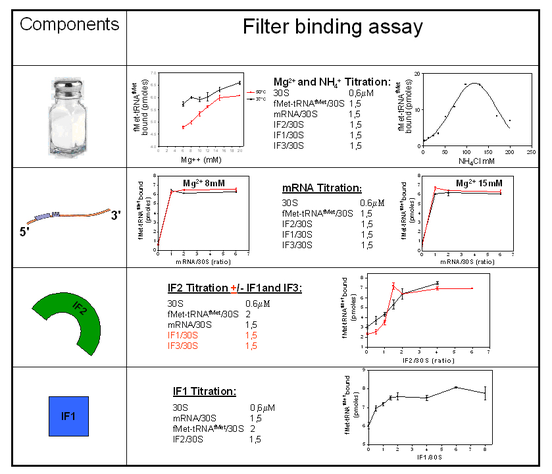 Effect of Temperature, Mg2+ ions, NH4+ ions, mRNA, IF1 and IF2 on the formation of the 30SIC as monitored by the f[35S]Met-tRNAfMet occupancy.

Click here for a larger version of this figure