Purification of specific cell populations from Drosophila tissues by magnetic bead sorting, for use in gene expression profiling

We developed a strategy to purify a small cell population from the Drosophila ovary for the purpose of gene expression profiling (used in Wang et al, 2006b). The Drosophila ovary is comprised of ovarioles, which are strings of egg chambers at successively later stages of development. Within each egg chamber, there are 16 large germ line cells encompassed by about 650 somatic epithelial follicle cells. Of this set of epithelial cells, some cells will take on specialized fates, such as the border cells. The border cells are a cluster of 6-8 cells that detach from the epithelium and actively migrate, as part of their normal development. Once they reach their target, a second population of follicle cells, centripetal cells, initiate migration.

We were interested in the gene expression profiles that distinguish the migratory border and centripetal cells from the non-motile somatic cells and the germ line cells they invade, since ample evidence suggested that changes in transcription play a major role in promoting border cell migration. As they comprise less than 1% of the cells in the developing egg chamber, the migratory population first had to be purified. While fluorescence activated cell sorting (FACS) is commonly used for this purpose, we found this approach to be inconvenient and gravely damaging to the cells. Therefore we developed a magnetic bead-based cell purification method (Figure 1A). Flies expressing the transcriptional activator GAL4 in the cells of interest were crossed to flies bearing the UAS-mCD8-GFP transgene, which leads to GAL4-dependent expression of a fusion protein (mCD8-GFP) composed of the extracellular and transmembrane domains of the mouse CD8 antigen (mCD8) fused to GFP (Lee and Luo, 1999). Ovaries were dissected from female progeny carrying both transgenes and dissociated with protease treatment. We captured the migratory cell population using commercially available anti-mCD8-antibody-coated magnetic beads and a magnetic separation column. We recovered viable cells enriched up to 100 fold for the GFP-positive population. In principle, this purification method can be generalized to other cell types in the fly or to other organisms. The protocol goes on to describe the use of RNA isolated from these cells to determine gene expression profiles by microarray analysis. We also compared the expression profiles of cells from wild-type and specific mutant strains to identify target genes of critical transcription factors required for border cell migration.

Variations on the protocol

This protocol can be used to purify any population of cells for which there is a specific GAL4 driver. In addition, by crossing the GAL4 driver of interest and UAS-mCD8-GFP in mutant backgrounds, the same population of cells can be purified from wild-type and mutant strains. For example, to identify transcriptional targets of the Slow Border Cells (SLBO) transcription factor, one can isolate border cells from slbo-Gal4, slbo^e7b / UAS-mCD8-GFP, slbo^Ly6 flies to compare these loss-of-function mutants to wild type. As the slbo-Gal4 driver also activates expression in the centripetal cells, a different driver may be needed. We used c522, slbo^e7b / UAS-mCD8-GFP, slbo^Ly6 to identify SLBO targets that might be specific to the border cells. As we expected, this method uncovered some known and many new potential target genes for SLBO. In a similar type of experiment, we sought to identify targets of the JAK/STAT signaling pathway. In this case, we used slbo-Gal4, UAS-mCD8-GFP / UAS-UPD because high levels of the activating protein Unpaired (UPD) result in hyper-activation of STAT target genes.

Following magnetic bead sorting, we expected to recover a viable population of cells highly enriched for mCD8-GFP fusion protein expression. This was tested by taking a small fraction of purified cells and staining with Hoechst dye (2 µg/ml) and propidium iodide (10 µg/ml), together in Grace’s medium with 10% fetal calf serum for 30 minutes at room temperature, and also by assaying for GFP expression (Figure 1F-I). We found the cells to be 30-100 fold enriched by the purification procedure, and 95% of the purified cells excluded propidium iodide.

We expected to see transcriptional differences between the GFP positive, motile cell population (purified from flies carrying slbo-Gal4 or c522) and the non-motile epithelial cells (GFP and mCD8-negative fraction, or GFP and mCD8-positive cells driven by tub-Gal4) and to identify new genes required in cell motility. We identified over 400 genes expressed in migratory cells using these methods. (See Wang et al, 2006a and Wang et al, 2006b).

We thank Anna C C Jang for helpful comments about the protocol and Mariana Melani for sharing unpublished information.

Figure 1: A method for purifying a small number of cells from Drosophila ovaries. 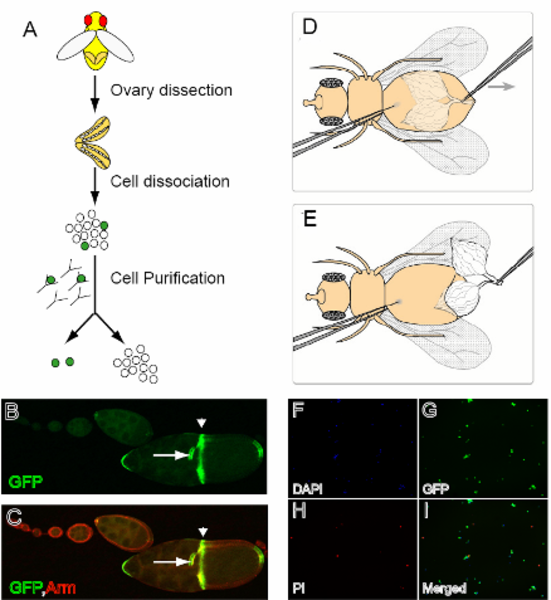 A) Schematic of the steps in the cell purification protocol. Ovaries are first dissected from female flies, and the tissue is dissociated with elastase treatment. Cells of interest (mCD8-GFP-positive), colored in green, are purified from dissociated ovaries by their affinity to anti-mCD8-antibody, which is linked to magnetic beads. B-C) Fluorescent micrographs of ovarioles of the genotype slbo-Gal4/UAS-mCD8-GFP. Young egg chambers are to the left and older ones on the right. B) GFP at the cell membranes labels the migratory cell types including the border cells (arrows), and the centripetal cells (arrowheads). The GFP-positive cells are selected in the purification strategy. By stage 10 (egg chamber to the right), migration is complete. C) Staining with Armadillo (Arm, red) antibody clearly labels all of the somatic cells present in the ovariole, of which the migratory cells (green) comprise less than 1%. The larger, germ-line cells can also be seen within each egg chamber by Arm staining. D-E) Schematic drawing of ovary dissection. D) A fattened female fly is held to the bottom of a depression slide, ventral side facing up, under insect cell culture medium using a pair of forceps. A second pair of forceps is used to pull the tail end of the fly. E) The ovary pair usually comes out of the abdomen intact using this approach. The ovary pair can then be transferred to the neighboring well of the depression slide or to a microcentrifuge tube with medium. F-I) Micrographs of purified cells. Nuclei of all the cells are labeled by Hoechst staining (F, blue in I). The population is highly enriched for GFP-positive cells (G, green in I), and most survive the treatment intact as assayed by exclusion of propidium iodide (H, red in I). “Adapted from Developmental Cell, vol. 10, Wang et al., Analysis of cell migration using whole genome expression profiling of migratory cells in the Drosophila ovary, 483-495 (2006), with permission from Elsevier”

A larger version of this image can be found here