Trypanosoma cruzi, the causative agent of Chagas disease, has a complex life cycle with different life-cycle stages between the insect vector (Reduvidae, popularly known as the kissing bug) and the mammalian host. In the insect midgut, non-proliferative infective bloodstream trypomastigote forms become proliferative, noninfective epimastigotes forms. These forms then replicate and, upon nutritional stress, can originate the infective metacyclic trypomastigotes. T. cruzi amastigogenesis occurs when metacyclic trypomastigotes from triatomine excreta infect mammals and differentiate into amastigotes inside host cells. These forms then multiply and transform into trypomastigotes that are released after rupturing the host cell plasma membrane, thus reaching the extracellular space and the bloodstream, where they can circulate and infect other cells and, eventually, another insect vector 1,2. The scarcity of parasite molecules that have been identified as a potential molecular target(s) may limit the development of new drugs or vaccines for Chagas disease 3. Despite being essential for the proliferation and maintenance of the parasite inside the mammalian host, amastigote forms have been very poorly explored in the identification of new targets for vaccine development. The main reason for this is that these forms are difficult to obtain, owing to the fact that the few existing purification protocols are time-consuming and have low yield. Currently, following infection of Vero cells with trypomastigotes, intracellular amastigotes can be obtained in vitro by centrifugation using a discontinuous metrizamide 4 or Percoll 5 gradient.

CAUTION! Trypanosoma cruzi is a highly infectious protozoan parasite, classified as a biosafety-level (BSL) 2 organism, thus a proper training is required before starting any of the experiments described here. All the experiments have to be done inside of a Class II biological safety cabinet and using adequate personal protection equipment (PPE).

Purification of amastigotes by anion-exchange chromatography:

Amastigotes suspension is passed through the anion-exchange column to separate them from host-cell debris and trypomastigotes. In this experiment, negative charges of the parasite surface, mainly due to the sialic acid content, interact or bind to positively charged DE52 medium. Since the content of sialic acid of trypomastigotes is higher, this parasite form strongly binds to the resin, whereas the amastigotes, which have no (intracellular forms) or less (extracellular forms) sialic acid content, bind only weakly to the positively charged column.

The whole procedure from growing the LLC-MK2 cells to the column chromatography takes 4 days for obtaining intracellular amastigotes and 6 days, for extracellular ones. 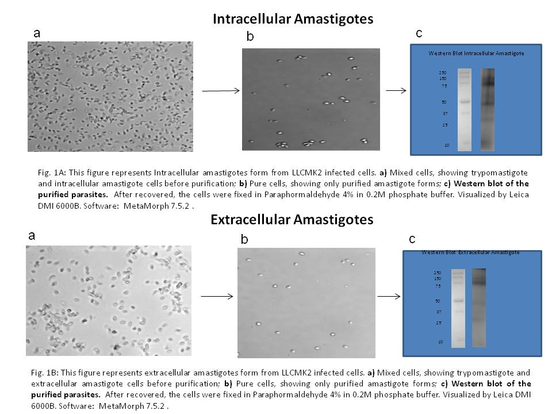