This protocol presents a method for encapsulation of purified proteins into cell-sized water-in-oil droplets surrounded by a phospholipid monolayer, which can be broadly applied to studies to reconstitute biological processes in cellular compartments.

In the past decade, in vitro reconstitution of biological processes from component molecules has been regarded as a powerful approach to uncover the underlying design principles of cells (1). This bottom-up approach enables independent, precise control of biochemical parameters, such as protein composition and concentration, and physical parameters, such as boundary conditions and system size. Thus, the minimal necessary components and specific physical conditions essential for realizing biological functions can be identified.

Here, we present a simple protocol for encapsulating purified proteins into cell-sized water-in-oil droplets surrounded by a phospholipid monolayer to mimic the cell boundary. This water-in-oil droplet system has been extensively utilized to investigate the effects of cellular microenvironments on various biological processes, including the self-organization of cytoskeletal architecture (2–8) and gene expression (9,10). We adopted this system to elucidate the direct contribution of the cellular boundary to the assembly of the cytokinetic ring, and clarified that actin filaments and myosin motors can self-organize into ring-shaped contractile bundles when they are confined to a cell-sized spherical space, even without spatiotemporal regulatory signals (11). The protocol described below was according to our previous reports (11,12).

PREPARATION OF A LIPID DRY FILM

PREPARATION OF A FLOW CHAMBER

ENCAPSLATION OF PROTEINS INTO WATER-IN-OIL DROPLETS

To demonstrate the process of dissolving a lipid dry film, egg PC containing 0.5% (mol/mol) of rhodamine-labelled phospholipids (1,2-dioleoyl-sn-glycero-3-phosphoethanolamine-N-lissamine rhodamine B sulfonyl ammonium salt; 810150C, Avanti Polar Lipids, Alabama, USA) was used. (a) Formation of a lipid dry film at the bottom of a glass test tube by overnight evacuation. (b) Overlaying a lipid dry film with mineral oil and sealing the tube top with a heat-resistant film. (c) Dissolving the lipid dry film by heating and vortexing. (d) Sonication in a water bath sonicator. Scale bars, 1 cm. 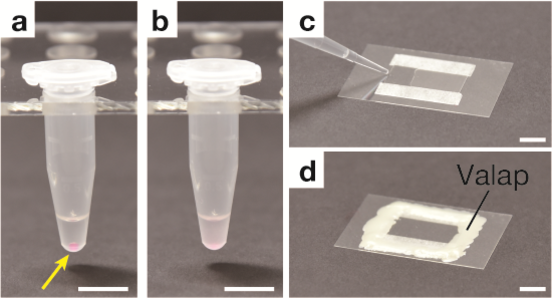 Tetramethylrhodamine-labelled bovine serum albumin (TMR-BSA, 5 mg mL-1) in PBS was encapsulated. Egg PC was used for phospholipids. (a) Before vortexing. The yellow arrow indicates the TMR-BSA solution in the lipid-oil mixture. (b) After vortexing. Many cell-sized water-in-oil droplets were formed. (c) Perfusion of water-in-oil droplets into a flow chamber. (d) Sealing the four sides of the flow chamber with Valap to prevent flow and evaporation of water from the droplets. Scale bars, 1 cm.

Figure 3: Observation of water-in-oil droplets under an optical microscope.