Among basal animals, the starlet sea anemone Nematostella vectensis (phylum Cnidaria) has emerged as a leading laboratory model organism. Herein, we describe techniques to prepare antiserum against Nematostella proteins and to detect Nematostella proteins by Western blotting of extracts from animals or tissue culture cells overexpressing Nematostella cDNAs. These protocols may also be used to complement a variety of cellular and molecular techniques being used by the increasing number of investigators who are focusing on gene regulatory systems of basal animals, such as sponges, corals, and placozoans.

A basic requirement for elucidating gene and protein function of any model organism is to detect specific proteins of interest. Herein, we describe protocols for detecting the expression individual proteins in extracts of the starlet sea anemone Nematostella vectensis and to verify the specificity of antiserum using transfected mammalian cells. Although these protocols were established for use with Nematostella, it is likely that they can be adapted for use with other cnidarian polyps (other anemones, corals, and hydra) or other invertebrate organisms (sponges and placozoans). Moreover, they can be used to complement a variety of other protocols that we have recently described for the investigation of gene and protein function in Nematostella (1,2).

Antisera against native Nematostella proteins, including Nv-NF-κB, Nv-IκB, and minicollagen proteins (Nv-NCol-1, Nv-NCol-3 and Nv-NCol-4), as well as a commercial antibody against 5HT serotonin receptor have been used in indirect immunofluorescent staining of anemones (3-6). Western blotting has been performed for Nv-NF-κB3, Nv-IκB4 and millicollagen proteins (6), which provides an important control for specificity in immunostaining experiments in Nematostella.

The starlet sea anemone, Nematostella vectensis, is a small, geographically widespread estuarine cnidarian (7-9). Nematostella is a member of the phylum Cnidaria, which, in addition to anemones, also includes corals, jellyfish and hydra. Several genes and gene families that were previously thought to be unique to vertebrates (due to their absence from the sequenced genomes of fruit fly and soil nematodes) have been identified in Nematostella (10). Such findings suggest that the genome of Nematostella has evolved in a relatively conservative fashion compared to many other invertebrates. Thus, study of gene/protein function in Nematostella is of interest from an evolutionary prospective, but is likely to also have ecological importance, given that other cnidarians (especially corals) are under threat from environmental insults. 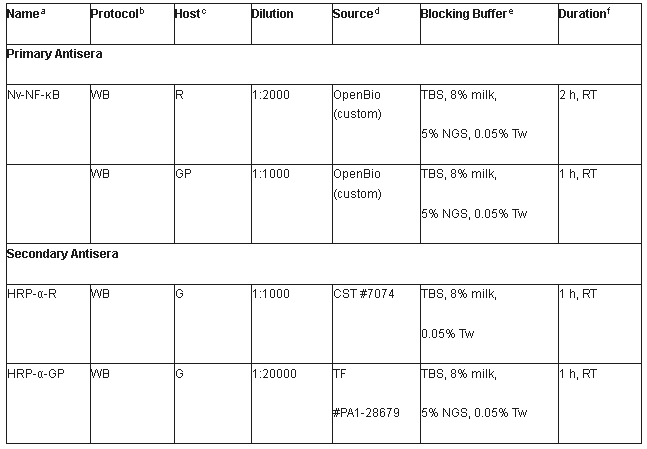 bDilutions and blocking buffers are specific for Immunofluorescence, IF; or Western blotting, WB. 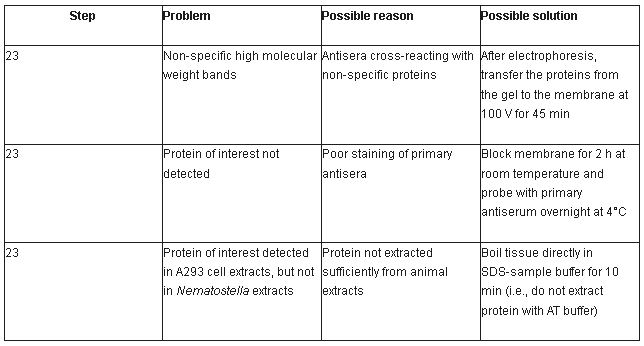 Using this Western blotting protocol, highly specific binding can achieved to Nematostella proteins using custom antisera targeted to the C-termini of the Nematostella NF-κB and IκB proteins (Fig. 1). The protein from animal extracts should co-migrate with the protein overexpressed in A293 cells, and there should be no detected protein in the lysates from empty vector-transfected A293 cells. We optimized the protocol for different primary and secondary antisera by (1) changing the dilution of the antiserum, (2) altering the composition of the Western Blocking Buffer, and/or (3) changing the length and/or temperature of the incubation. Table 1 describes conditions that we have successfully used with two different primary antisera and two secondary antisera (3,4,12).

Other controls that might be performed are to perform a parallel Western blot using pre-immune serum for the primary antibody (no protein should be detected) or to pre-absorb antiserum with the immunogenic peptide (which should result in loss of the specific protein on Western blots). In addition, the protein may be present in soluble or insoluble extracts from animals, which will need to determined experimentally (3). For example, certain cnidocyte minicollagen proteins require extensive boiling in SDS sample buffer for extraction (6).

This research was supported by National Science Foundation grant MCB-0924749 to T.D.G and J.R.F. F.S.W. was supported by a predoctoral grant from the Superfund Basic Research Program at Boston University (5 P42 E507381) and Warren-McLeod graduate fellowships in Marine Biology. 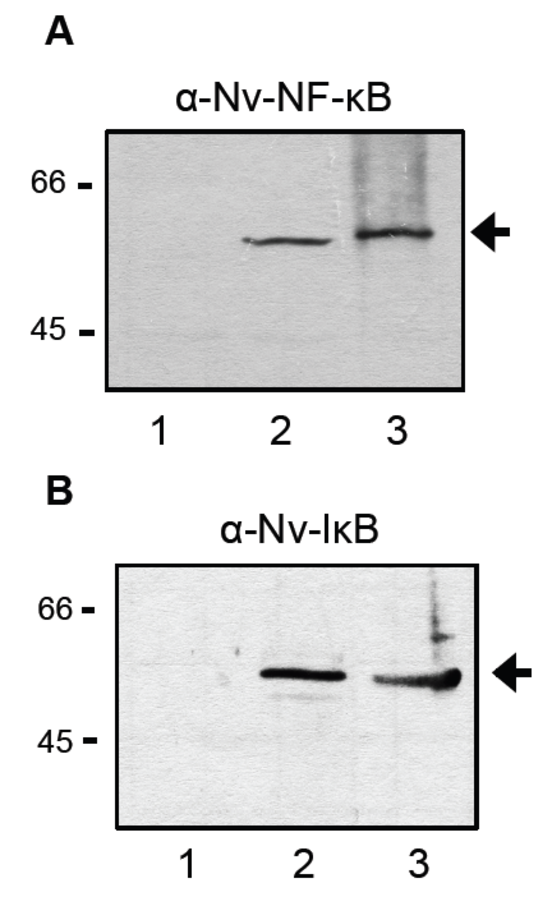