Preparation of aggregate-free α -synuclein for in vitro aggregation study

Establishing reproducible aggregation kinetics and amyloid formation of α-synuclein (α-Syn) is of great interest for understanding Parkinson’s disease (PD) pathogenesis. α-Syn, 140 amino acid residues intrinsically disorder protein (IDP), is well known for its inconsistent aggregation behaviour in vitro. Previously different methods/conditions like orbital agitation, usage of small glass beads in plate reader assay were reported to achieve higher reproducibility. In addition to mechanical agitation, here we report the usage of aggregate free low molecular weight (LMW) solution as a starting material for monitoring aggregation pathway of α-Syn. This allowed us to obtain the reproducible fibrillation kinetics of α-Syn at a satisfactory level. This LMW could be used not only for understanding PD pathogenesis but also for screening inhibitors against α-Syn fibrillation and to study many molecular events in vitro.

α-Synuclein aggregation and amyloid formation is associated with Parkinson’s disease (PD) pathogenesis (1). α-Syn, a 140 amino acid residues protein is natively unstructured under physiological condition (2). It converts to higher order amyloid fibrils via self assembly upon prolonged incubation. Amyloid formation is a stochastic process where activation energy is directly co-related with nucleation (3, 4, 5). During amyloid formation, monomers self assemble and undergo structural rearrangement. This structural rearrangement is not limited to specific structural classes rather a wide range such as globular proteins of α-helix, β-barrel, β-sheet, α-helix/β-sheet mixture (6, 7, 8, 9, 10, 11) and natively unstructured proteins have been reported to form fibrils (12, 13, 14). Fibrillation of globular proteins can be initiated by adding denaturants or elevated temperature/pH change. These conditions increase the intermolecular interactions of the inter peptides chain by exposing the buried hydrophobic surface area thereby leading to the formation of higher order assembly.

In contrast to these globular proteins, monomeric α-Syn lacks any secondary structure and specific intra-chain interactions and undergoes self assembly without any external additives. However, its aggregation propensity can be influenced in presence of various experimental condition such as addition of metal ions, polyamines, glycosaminoglycans (GAGS) etc (15, 16, 17, 18). α-Syn shows variable kinetics in vitro and optimizing its fibrillation kinetics would be of great interest to study molecular events and to screen small molecule inhibitors against α-Syn aggregation in vitro.

Many attempts have been made previously to get reproducible kinetics of α-Syn fibrillation. A general conclusion is that increased reproducibility is inversely correlated with the lag time (4). As fibrillation kinetics is a stochastic event and nucleation is the rate determining step (3), lowering the activation energy in the nucleation step would be helpful to obtain lower variance in the aggregation kinetics. Fink and co-workers used small glass beads in the plate reader assay in combination with orbital shaking to improve the reproducibility of aggregation kinetics (17, 19). Agitation also decreases the activation energy in the nucleation process and fastens the overall aggregation process (19). Otzen and co-workers reported that higher reproducibility in the aggregation kinetics was achieved by adding either seed of preformed fibrils or submicellar amounts of sodium dodecyl sulphate (SDS) (5). However, adding external additives like SDS, metal ions or GAGS can lead to different aggregation pathway of α-Syn. In our current work, we report that usage of aggregate-free low molecular weight (LMW, <100 kDa) α-Syn, which provides higher reproducible results for α-Syn aggregation kinetics compared to other starting materials where aggregating solutions were prepared by simple centrifugation or passing through 0.22 µm syringe filter. This approach for making aggregate-free LMW α-Syn could also be used for studying the the aggregation kinetics of other amyloidogenic proteins/peptides.

The preparation of low molecular weight α-Syn solution has been summarized schematicaly in Figure 1.

Concentration of the LMW α-Syn was measured by UV absorbance at 280 nm, considering molar ellipticity of α-Syn as 5960 cm-1. The final concentration was adjusted to 300 µM.

α-Syn is rich in acidic amino acid residues at the C-terminus with a pKa value ~ 6.0 and thus is not fully soluble in the buffer of pH 7.4. When 20 mM Gly-NaOH buffer, pH 7.4, 0.01% sodium azide was added to the lyophilized α-Syn, it formed suspension. AFM images of this suspension showed larger particles/clusters with amorphous morphology with an average height of ~30-40 nm (Figure 2). This suspension was solubilized by adding few drops of 2(M) NaOH and the pH was then adjusted to 7.4 by adding few μl of 2(N) HCl. The solution was then centrifuged at 13000 x g to remove any insoluble aggregates. Supernatant was collected. AFM images of this supernatant showed presence of both small and large amorphous particles with some oligomers with an average height of ~15 nm (Figure 2). The solution was then dialyzed for 10 hours and then passed through 100 kDa cut-off filter (for details please refer method section). Flow through was collected and we termed these as “low molecular weight” (LMW) species. This LMW mostly contains monomeric form with few lower order oligomers as evident from photo induced cross linking of unmodified protein (PICUP) data21. AFM of LMW showed very small sized amorphous particle with an average height of ~5 nm (Figure 2). Therefore, the data showed LMW is free from any large prefibrillar aggregates and higher order oligomers. This LMW is now suitable to monitor the fibrillation kinetics of α-Syn.

Aggregation kinetics and structural transition of α-Syn. 300 µM LMW of α-Syn was prepared in 20 mM Gly-NaOH buffer, pH 7.4, 0.01% sodium azide and incubated at 37oC with slight agitation (50 r.p.m.). The aggregation kinetics of α-Syn was monitored with an amyloid specific dye ThT. ThT generally produces strong fluorescence signal upon binding to fibrillar components with a λmax at 480 nm when it is excited at 450 nm; whereas it fails to bind with the monomeric counterpart (22). After immediate dissolution, α-Syn showed random coil structure in CD (Figure 3A) with negligible ThT binding (Figure 3B) as expected. With progression of time, α-Syn formed partially folded intermediate where it showed moderate ThT binding. After that α-Syn showed rapid increase in ThT binding and gradually converted to β-sheet structure via helical intermediates (Figure 3A). Finally ThT fluorescence reached to its maximum value and became constant (Figure 3B). This LMW of α-Syn as a starting material provides consistent fibrillation kinetics (standard deviation of lag time for 300 μM protein is 4-12%) across the different sets compared to other conditions where the starting materials for aggregation study was prepared by simply centrifugation of α-Syn solution or by passed through 0.22 µM syringe filter (data not shown). This way we were also able to monitor the structural transition of α-Syn aggregation and amyloid formation in a detailed manner. Thus we report, LMW as a starting material could be suitable to monitor aggregation pathway of amyloidogenic polypeptides/proteins. 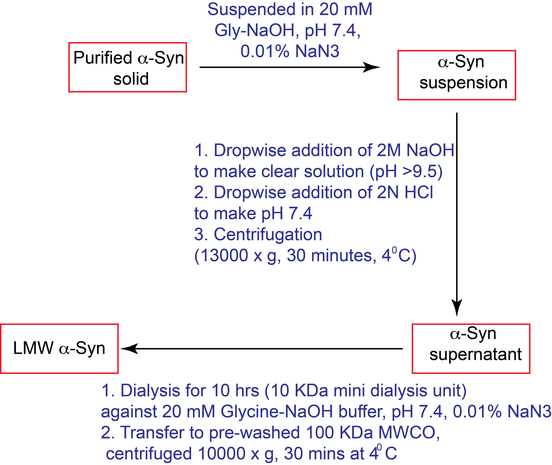