Prediction of allergenic proteins and mapping of IgE epitopes in allergens

In present era use of genetically modified proteins in foods, therapeutics and biopharmaceuticals is increasing with exponential rate. Thus it is important to predict whether a modified protein allergenic or not. In 2003, the Codex Alimentarius Commission (Codex) conveyed a panel of international food safety regulators to review the FAO/ WHO 2001 recommendations and recognized the uncertainties associated with the bioinformatics part of the guidelines. They recommended various tests for examining allergenic behavior of proteins that includes source of gene, sequence similarities with known allergens, stability of protein and IgE bindings. Considering these points in mind a method was developed for predicting allergenic proteins, which is based on various approaches.

Both formatted and non-formated sequences are accepted as input. For formatted sequences the server uses ReadSeq. software which can read most commonly used standard sequence formats including FASTA/PIR/EMBL/GENBANK etc. The user have to specify whether the sequence is in any format or non-formated as raw/plain text (single letter coded amino acid only)

User can access and use this web server from any computer (Windows or Linux or Mac) with web browser and Internet connection.

One Submission filled form is shown in Figure 1

This server allows users to predict allergens and mapping of IgE epitopes. Server may take time if users choose all the available approaches at one go.

The server allows users to present results of various approaches in a single HTML output page. It provides comprehensive information about the prediction that includes score, threshold, distance from threshold, Positive Predictive Value (PPV) and Negative Predictive Value (NPV). If the PPV is >80%, then there is a high chance that the protein is a potential allergen. In case of BLAST search, if the query sequence matches with any ARP in the database, then the matched ARP is also shown. AlgPred also allows the mapping of IgE epitopes on allergenic proteins. The output of AlgPred has been shown in Figure 2. A result of hybrid model is shown in Figure 3, which is output of hybrid model.

This work was supported by the Council of Scientific and Industrial Research and the Department of Biotechnology, Government of India.

Figure 1: Submission form of algpred where sequence is in FASTA format; IgE mapping option is used for prediction. 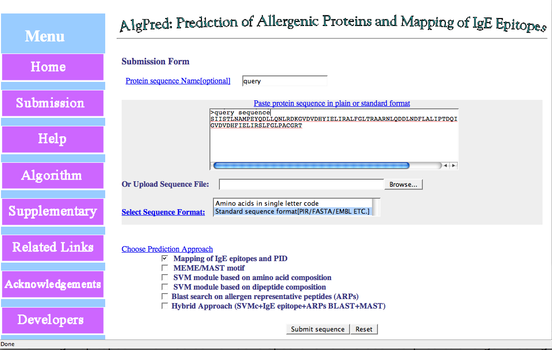 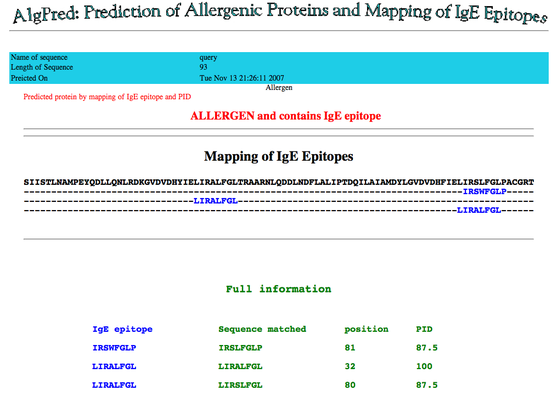 Figure 3: Example output of algpred for hybrid option where all methods are used