This protocol describes an integration of the Non-invasive Micro-test Technique and Oxygen Optrode (NMT-OO) to quantify rhizosphere oxygen fluxes in Arabidopsis. The optrode has high sensitivity and selectivity in the measurement of oxygen concentrations and fluxes at the cellular level. In particular, application of the NMT-OO using the self-referencing method avoids environmental electromagnetic noise and hysteresis/calibration drift, providing extremely high signal-to-noise ratios for measuring biophysical transport. We successfully applied this technique to measure rhizosphere oxygen fluxes and metabolism in intact roots of Arabidopsis plants. The system we describe here is a simple and reliable method for measuring oxygen fluxes in plants and has other broad applications in cytological studies.

Oxygen is one of the most fundamental elements for animals, plants, fungi, and bacterial systems. Real-time measurement of oxygen concentration, transport, and respiration in living cells is crucial to answering physiological questions of development, metabolism, and stress response. There have been significant efforts to measure oxygen transport and metabolism in living cells and tissues (1,2,3,4). Early efforts were based on polarograghic electrochemical approaches where a current is measured as a function of oxygen reduction. These electrode-based methods all face limitations because of susceptibility to electromagnetic interference, convective artifacts, and calibration drift, which create high background noise5 and a requirement for constant recalibration. It is possible to partially alleviate convective artifacts from the electrode-based methods by reducing the diameter of an electrode and covering the electrode by a gas-permeable membrane (5) but this in turn increases the susceptibility to electromagnetic noise.

The self-referencing technique can provide a reliable solution to measuring the analytes flux associated with living cells. To monitor oxygen flux and respiratory activity in single cells or/and tissues, microelectrode-based electrochemical polarographic methods were adapted in the last decade (3,6,7,8). However, the electrochemical microelectrode approach still suffered from experimental artifacts when high sensitivity and accuracy of measurement are required because the electrode sensitivity to electromagnetic noise, fouling, and calibration drift. Therefore, an optical sensor, the so-called optrode (optical electrode), was developed to minimize these disadvantage (9,10,11,12).

The NMT can provide non-invasive measurement of the flux of analytes in living cells and tissues. Based on Fick’s law , we can calculate the flux rate by measuring concentration differences using a microsensor, which oscillates between two positions (ΔX), if the diffusion coefficient (D) is known (10). In the current study, we used a newly developed oxygen-specific optrode with high sensitivity and a high signal-to-noise ratio (SNR). Furthermore, when using an optrode with NMS, there is no need to use a reference electrode, and thus the system is simple to construct. This construction helps in decreasing experimental artifacts and errors (Box 2).

The oxygen transport and respiratory activity of plant cell tissues reflect spatial and temporal information about the physiological responses of cell metabolism and stress responses (11). Here we compared oxygen metabolism and flux rate on the root surface of wild-type (WT) Arabidopsis and mutant lines of the atrbohD/F double mutant, which lacks the expression of membrane-localized NADPH-oxidase, resulting in a reduced rate of root elongation by inhibition of cell expansion and growth (13,14). We also compared rhizosphere oxygen flux rate in light- and dark-grown Arabidopsis seedlings, which show different elongation rates in the elongation zone (15). These results documented differences in respiratory oxygen flux that correlate with root growth, and confirm the NMT-OO approach as a low-cost, easy-to-use instrument for detecting oxygen transport and metabolism with high sensitivity and a high SNR. The following is a detailed protocol for the complete construction of this optrode-based NMT and measurement of rhizosphere oxygen flux in Arabidopsis seedlings.

Figure 2 shows the schematic diagram of the NMT-OO system in our study. The software, imFLUX (YoungeUSA), controls several basic components of this system by adjusting the power supply, imaging with a digital camera, and managing the main component: the optrodes.

The following describes the construction of the measuring system: A LED power supplier controls the voltage signal to a blue LED (503–505 nm). A 20× microscope (Newport, USA) objective focuses light from the LED onto the optical fiber, which is coupled to a blue filter leading the excitation light to the MicroTip-Fiber Optic Oxygen Sensor (World Precision Instruments, USA). Fluorescence emission is conducted by the fibers and split by the fiber coupler again. When the red fluorescence signal reaches the PMT (Hamamatsu, Japan), the signals are transformed into electrical signals and conducted into a Lock-in-Amplifier (SRS 530). Then, the phase shift and fluorescence intensities are recorded by the computer and analyzed by imFLUX (YoungerUSA，USA).

Roots are heterotrophic tissues in plant bodies, taking up oxygen from the environment for growth and metabolism. The rhizosphere oxygen flux results in a net influx value in experiments (Figure 2C). As shown in Figure 3A, the peak oxygen influx value occurred 0.2 mm back from the root tip, coinciding with the root apical transition zone, which has also a peak value of auxin influx and high cell elongation and development rate (18, 19 20). Lack of NADPH-oxidase results in a reduced root elongation and may alter respiratory activity at the rhizophere of the apical root elongation zone (13, 14). The oxygen influx rate is reduced significantly in the atrbohD/F double mutant (Figure 3A). Dark-grown seedlings have a low respiratory rate and metabolism at the root meristem and elongation zone (15). Thus, the oxygen influx rate in dark-grown Arabidopsis seedlings is significantly decreased (Figure 3A). H2O2, a typical ROS signal molecule, also changes the rhizosphere oxygen flux dramatically (Figure 3B).

In conclusion, we describe here a real-time and non-invasive probe system with highly sensitivity for detecting the oxygen flux rate in plant system.

We thank Dr. Miguel Angel Torres (University of North Carolina, USA.) for providing us the seeds of atrbohD/F double mutant. This work is supported by the National Basic Research Program of China (973 Program 2011CB809103, 2011CB944601), the CAS/SAFEA International Partnership Program for Creative Research Teams (20090491019), the National Natural Science Foundation of China (31000595, 30730009), the Knowledge Innovation Program of the Chinese Academy of Sciences (KJCX2-YW-L08, KSCX2-EW-J-1) and from the China Postdoctoral Science Foundation.

Figure 1: Principle of fluorescence quenching of the fluorescent dye (PtTFPP) by oxygen 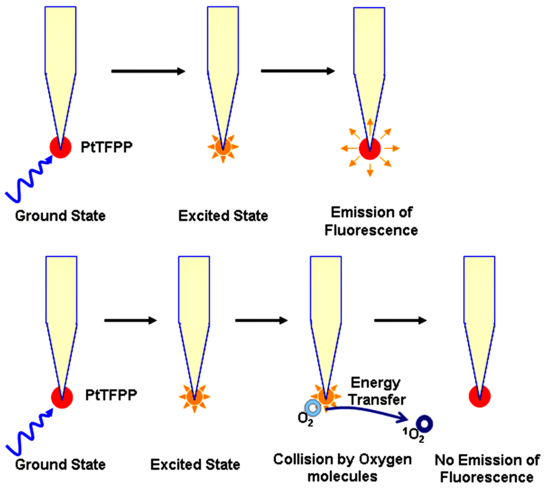 Figure 2 : Figure 2. Schematic diagram of the circuit of a SR optrode system. 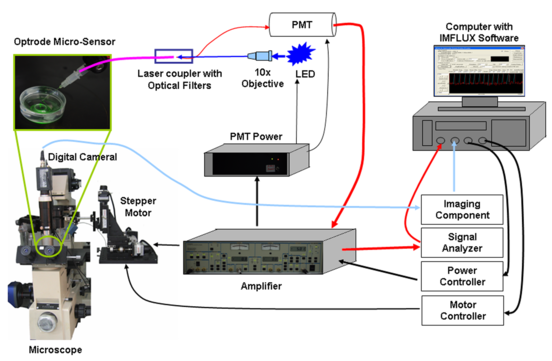 Figure 2 shows the schematic diagram of the SR optrode system in our study. The software, imFLUX, controls several basic components of this system, including adjusting the power supply, imaging with a digital camera, and managing the main component: the optrode system. We described the construction of the measuring system here: A LED power supplier controls the voltage signal to a blue LED (503–505 nm). An optical fiber coupled with a blue band-pass filter leads this excitation light to the MicroTip-Fiber Optic Oxygen Sensor, which has the fluorescence reporter, PtTFPP, on the micro-tip. Fluorescence emission (630–640 nm) is conducted by the fibers and split by the fiber coupler again. When the red fluorescence signal reaches the PMT, the signals are multiplied and transformed into electrical signals and conducted into an amplifier. Then, the phase shift and fluorescence intensities are recorded by the computer and analyzed by imFLUX. 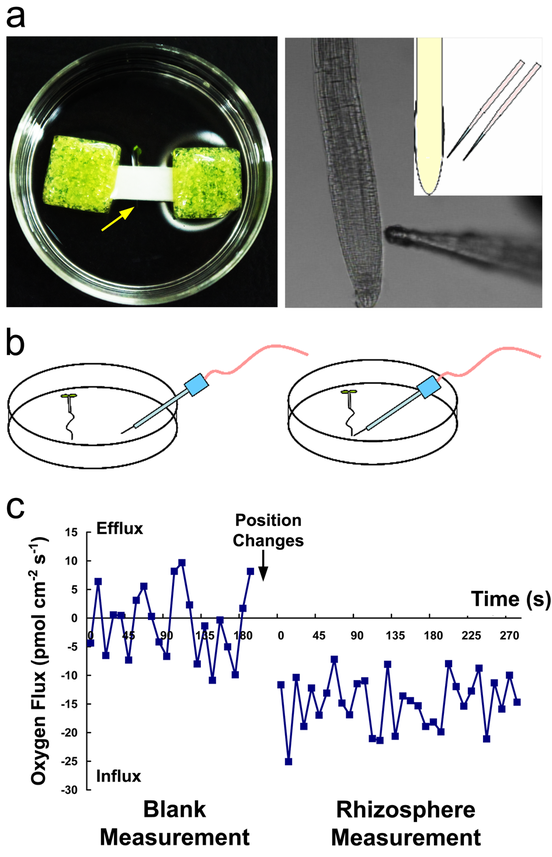 A photo (left) and a microscopy image (right) show the chamber for measuring rhizosphere oxygen flux in Arabidopsis roots. Filter paper was used to gently immobilize the root tip while allowing free access to the optrode microsensor (yellow arrow). (b) A schematic diagram showing the measuring position of the blank aqueous medium (10 mm from the root, left) and rhizosphere measurement (5 μm from the root). (c) An oxygen flux profile showing the oxygen flux in the blank aqueous medium for about 3 minutes. The optrode was then moved to the root surface region for rhizosphere measurement (5 μm from the root surface). A positive number indicates efflux of oxygen while a negative number indicates influx. 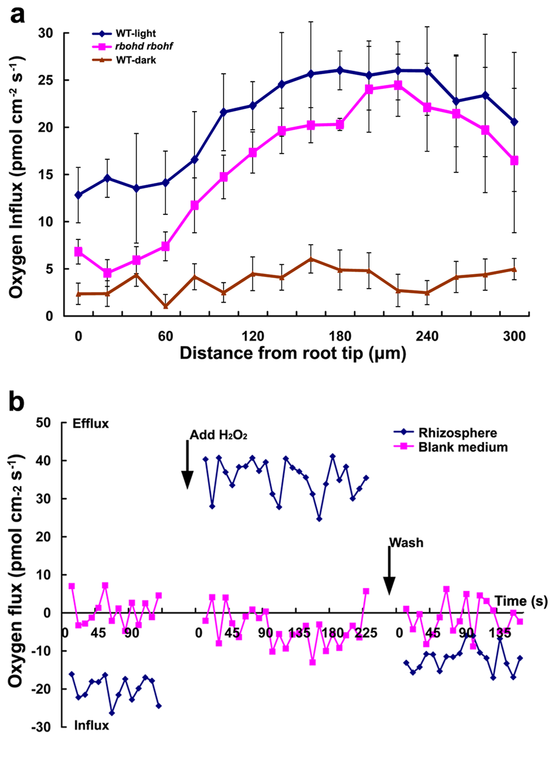 Rhizosphere oxygen flux profiles from the end of an Arabidopsis root tip and up to 300 μm above it. Blue curve: WT seedling grown under light conditions; brown curve: WT seedling grown under dark conditions; purple curve: atrbohD/F double mutant grown under light conditions. We set the optrode moving along the root tissue with a step distance of 20 μm. Error bars indicate the standard errors from four seedlings. (b) The effect of H2O2 on the rhizosphere oxygen flux in Arabidopsis roots is shown by the blue curve. The measurement conducted at a measuring position in the apical elongation zone (200 μm up from the root tip). When the measured value of oxygen flux is stable (around 20 pmol cm–2 s–1), H2O2 containing medium is added to the measuring chamber to a final concentration of 30 ppm. The net oxygen influx in the rhizosphere quickly changed to a net oxygen efflux with a stable value (around 35 pmol cm–2 s–1). After washing out all of the H2O2 with the measuring medium, net oxygen influx resumes. The purple curve indicates that the oxygen flux rate did not significantly change in the blank aqueous medium (10 mm from the root).

The principle of oxygen measurement with the optrode is based on the effect of fluorescence quenching by oxygen molecules in the fluorescence dye, PtTFPP. As shown in the schematic model (Figure 1), the collision between an excited PtTFPP molecule and an oxygen molecule results in energy transfer to the oxygen. Therefore, the PtTFPP is quenched to its ground state without emission of fluorescence signals. A dynamic relationship between the oxygen concentration and the fluorescence intensity, as well as duration, is described in the Stern–Volmer-equation (Formula 1). In consideration of noise, drift, photobleaching effects, and sensor lifetime, fluorescence lifetime-based measurements have significant advantages over fluorescence intensity-based methods. The relationship between the measured phase angle and the fluorescent decay time is described in (Formula 2). Therefore, the Stern–Volmer equation displays a linear correlation between decay time and phase angle of fluorescent signals and oxygen concentration (Formula 3).

Based on Fick’s law (see Introduction), application of the SR system provides a real-time and noninvasive measurement of the flux of analytes at the surface of cells/tissues. In the SR system, a microsensor vibrates between two positions and measures the concentration of analytes there. The optrode is such a microsensor to measure the concentration of analytes by analyzing the optical characters of fluorescent dyes immobilized on the tip of an optical fiber. The fluorescent signals are sensed and transducted into electrode signals by the PMT device, and the fluorescence decay and phase angle (φ) of the fluorescent signals are amplified and measured by a computer. In the working range of oxygen concentrations (0–21%), the measurement of phase angles is linearly related to the oxygen concentration9. Thus, the oxygen flux between two measured points can be determined using the following formula (Formula 4):

Protocol as a Word File: Non-invasive measurement of real-time oxygen flux in plant systems with a self-referencing optrode