Room temperature operation, low detection limit and fast response time are highly desirable for a wide range of gas sensing applications. However, the available gas sensors suffer mainly from high temperature operation or external stimulation for response/recovery. Here, we report an ultrasensitive-flexible-silver-nanoparticle based nanocomposite resistive sensor for ammonia detection and established the sensing mechanism. We show that the nanocomposite can detect ammonia as low as 500 parts-per-trillion at room temperature in a minute time. Furthermore, the evolution of ammonia from different chemical reactions has been demonstrated using the nanocomposite sensor. Our results demonstrate the proof-of-concept for the new detector to be used in several applications including homeland security, environmental pollution and leak detection in research laboratories and many others.

An ideal sensor should possess the following significant features: (i) operation at room temperature; (ii) working in ambient environment and no requirement of oxygen or air supply; (iii) no external stimulus such as Joule heating or UV illumination for response/recovery; (iv) low detection limit; (v) high sensitivity and reproducibility; (vi) fast response and recovery; (vii) low cost and eco-friendly, etc. The commercially available conducting polymer sensors require high power consumption since they provide adequate sensitivity only at high temperatures. Intense research is underway to develop new sensing materials and devices for a wide range of applications, especially, at room temperature. 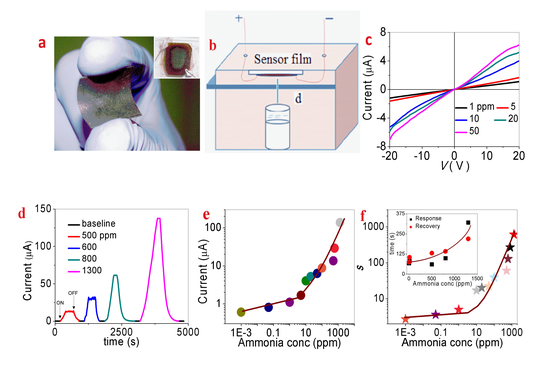 (a) Optical micrograph of the film on a flexible substrate. Optical micrograph of the film with electrical leads is shown in the inset. (b) Schematic representation of the experimental set up. The distance from the source to film is 1 cm. (c) Current-voltage characteristics with different ammonia concentrations. (d) Temporal response to different ammonia concentrations for an applied voltage of 20 V. Ammonia ON and OFF are indicated by arrows. (e & f) Current and sensitivity as a function of ammonia concentration in log-log plot. Response time and recovery time are shown in the inset. Solid lines are guide to the eye. 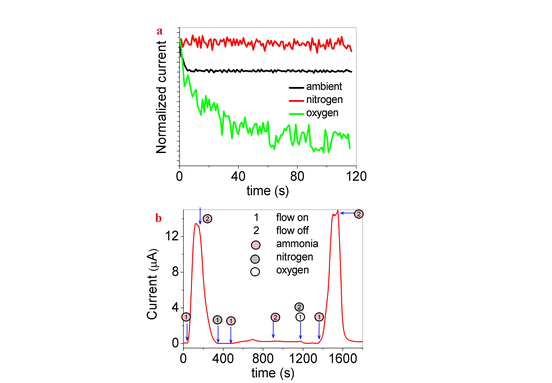 (a) Current stability and (b) ammonia sensing study at different environments; ambient, nitrogen and oxygen. 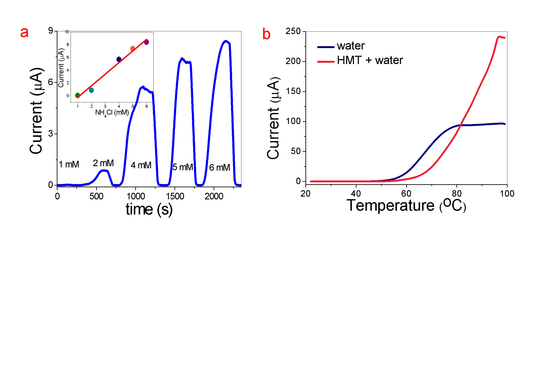