Single fluorescence molecule microscopy provides a privileged approach achieving a spatial resolution close to the molecular scale (1-5). The position of an isolated fluorescent molecule is accurately determined by the center of the signal. The counterpart is a necessity for imaging sparse fluorescent molecules. Consequently, single particle tracking (SPT) is only amenable when handling a very limited number of targets at the same time.

This major drawback has been partly circumvented by the development of super-resolution optical imaging techniques (6). Among them, photoactivation localization microscopy (PALM (7), FPALM (8)) or stochastic optical reconstruction microscopy (STORM (9)) permit the localization of thousands of single fluorophores per acquisition. This is experimentally performed by sequentially turning on a fraction of the fluorescently-labeled molecules. The combination of PALM with live-cell SPT (sptPALM (10)) allows to simultaneously track a large number of molecules. This approach provides significant insight into molecular dynamics and interactions taking place at the cell membrane.

For experimental proof of concept, biotinylated anti-EGFR Ab-3 antibody (Lab Vision) was mixed with streptavidine-Qdot605 (Invitrogen) in the presence of 100 × excess of biotin (Calbiochem) in order to achieve at best a single mAb binding per Qdot. Complexes were incubated on COS-7 cells which express ~ 50,000 endogenous EGF ( ~ 20 EGFR/µm2) (13). For regular experimental conditions, using 10 nM antibody-Qdots led to a range of typically 400 labeled EGFR per cell. In order to delineate the highest density resolved by MTT, up to 1,200 receptors were tracked simultaneously.

Custom algorithms were written with Octave (version 2.1.73, GNU, GPL) and Matlab (version 7.4, R2007a, MathWorks). The source code of MTT software is available at http://www.ciml.univ-mrs.fr/Lab/He-Marguet.htm; academic and nonprofit use is free of charge.

Cell plating should be done at least one day before acquisition. Cell labeling takes less than 1 h (mix, incubations and washings).

Data acquisition takes 10 s per image stack. Total time must include visual scanning of the sample. Also consider enough data acquisition for each condition tested, for cell to cell reproducibility considerations. This may result in a total of half a day per experimental condition.

For data analysis, using a PC equipped with a 3.2 GHz processor and 2 Go RAM, treating one stack of 300 frames with a typical labeling density (400 molecules per frame) takes about 20 min.

Step 1: Cell morphology considerations – At first, working with adherent cell lines such as fibroblasts allows easy recording on planar lamellipodia. This avoids having to consider 3D geometries. In practice, this can be best achieved with subconfluent, highly spread cells. Moreover, having either too spare or almost confluent cells, due to inadequate initial density and time between spreading and experiment, may impact on cell physiology (i.e. adhesion, metabolism) and experimental reproducibility.

MTT analysis is however not restricted to fibroblast cells.

Step 2: Qdot valence issue – In the absence of uncoupled biotin, commercially available Qdots, which are bound to 4-10 tetravalent streptavidins, can putatively bind up to tens of antibodies (i.e. theoretically between 16 and 40 binding sites per Qdot). These complexes can potentially induce an aggregation of membrane receptors, resulting in possible physiological bias such as artefactual stimulation induced by receptor capping (18). Adding a 100× molar excess of biotin minimizes this multivalence and ensures that most of the Qdots are coupled to only one antibody (or none, but uncoupled Qdots will be ultimately washed out).

Importantly, the biotinylated antibody and biotin should be first mixed together, prior to mixing with streptavidin-Qdots, in order to avoid preferential binding of one of the two species to streptavidin. Nota: in our study of EGFR, we used a biotinylated anti-EGFR (Ab-3, Lab Vision). Although being bivalent, this antibody is non-activating (not shown). However, one should consider, when it is possible, monovalent labeling strategies such as employing F(ab) fragments or monovalent streptavidin against directly targeted biotin (19). In our case, we observed that labeling EGFR with Qdots coupled to F(ab) together with an excess of biotin, lead to fully comparable results.

Qdot and antibody concentrations will directly determine the final labeling density. For the MTT approach, this density must be sufficient to spatially sample the cellular dynamic properties.

Step 9: Acquisition parameters – For single-molecule measurements, all acquisition parameters should be optimized, notably the light intensity, filter sets and other optics transmission efficiency, as well as the camera settings. In our experimental conditions, the amplification gain was set at 3850 to avoid saturation.

Moreover, the magnification should ensure that the resulting pixel size verifies the Shannon-Nyquist sampling theorem: the fluorescence peak diameter (according to the Rayleigh criterion and including motion blurring) should be at least twice the pixel size to warrant proper localization.

Step 11: SNR versus acquisition frequency – Signal-to-noise ratio and acquisition speed are critical issues in SPT. Since they are intimately related, an affordable tradeoff must be carefully determined when choosing the time-lag.

More precisely, the time-lag used for recording will directly affect the dynamic range and sensibility. It should be both low enough to ensure a good dynamic (allowing access to fast motions) and high enough to provide a sufficient signal to noise ratio. Noticeably, working with the 512 BFT Cascade camera allowed us to successfully investigate EGFR dynamics at frequencies up to 200 frames/s (5 ms time-lag). New cameras, such as the 128 BFT Cascade, even allow measurements at 1,000 frames/s (1 ms time-lag), with still an acceptable SNR.

Step 15: Input parameters for reconnecting trajectories – Dmax provides an upper limit for reconnecting trajectories which has to be converted in pixels2/lag. This cutoff results from a tradeoff allowing efficient reconnection of fast movements without leading to erroneous reconnections of neighboring blinking molecules for instance. If this input value cannot be straightforwardly estimated, a range of values can be tested using a representative dataset to generate a plot of output versus input diffusion values. Too small input values should generate aborted, short range trajectories, while too high input values should generate artefactual, long range connections, resulting in under or overestimate of diffusion, respectively. MTT should run with an intermediate value, corresponding to an intermediate stable regime, for which the estimated output diffusion is no longer affected by small variations of Dmax.

Step 17B: Input parameters for cartography – The detection index relies on three parameters, Lmin, tmin and wconf, stored in probaconfparams_varM.dat, in the carto folder. Each parameter may need to be optimized for a given problem. See Sergé et al, Nat. Methods 2008 (DOI 10.1038/nmeth.1233) and refs 14-17 for further information.

Step 9 – Problem A: Signal is corrupted by a strong autofluorescence background.

The core MTT analysis provides parameters (position, intensity, radius, offset and blink status), as well as means and variances updated within a sliding temporal window. Relevance and accuracy can be adequately evaluated using Monte Carlo simulations of Brownian random walks, providing known inputs which can be compared to outputs.

The cartography module provides dynamic maps of the transient confinement events which are expected to occur within stochastic motions of membrane molecules (Fig. 3).

Figure 1: Screenshot of a Matlab session 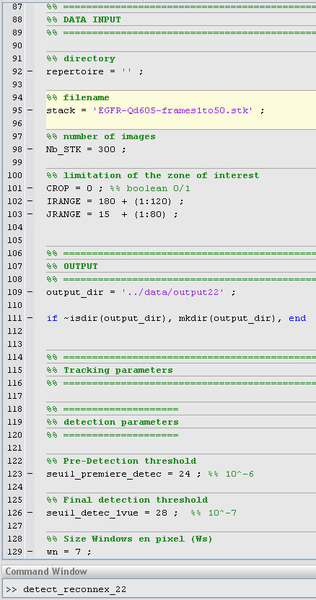 Editing the MTTparam.m file allows adjusting parameters such as stack filename for instance (highlighted in yellow). Running detectreconnex_22.m from the command window starts a batch analysis for the data files stored in the current directory.

Figure 2: Overview of the MTT algorithm 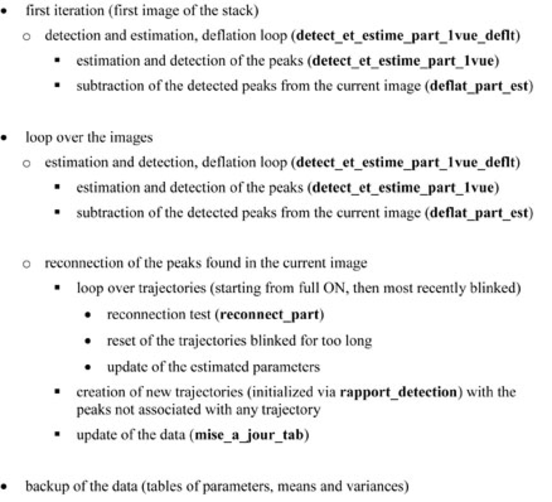 The first frame is used to initiate trajectories which are connected by the loop over the following frames. 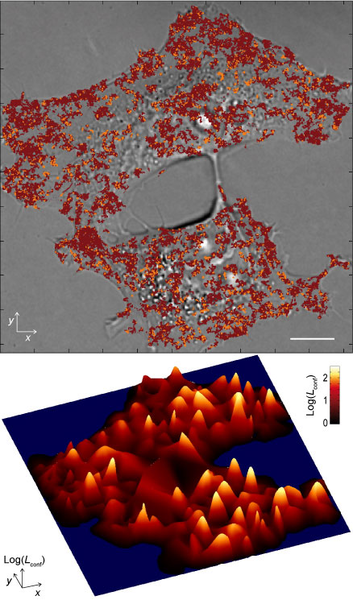 One key parameter involved in plasma membrane dynamics and organization is the local and transient confinement of membrane molecules and complexes. Starting from a stack of 300 frames length (10 s), all trajectories were projected onto a DIC image of the cells (top, scale bar 10 µm). A confinement index, computed for each step, allows detecting confined events (orange) within free-like diffusing walks (bordeaux) by using an adequate threshold. Conversely, plotting a 3D surface interpolated through the discrete confinement values (Lconf, bottom) provides a visual rendering of the underlying diversity which can be further investigated using movies and/or statistical tools.