Monitoring endothelial cell development and migration in the embryonic CNS

Immunohistochemical labeling of blood vessels with isolectin B4 in whole mounts of embryonic telencephalon:

Whole mount preparations described below were key in identifying fine anatomical details and developmental gradients of telencephalic vasculature (Fig. 2). By using these methods, we found that the periventricular vessels in the ventral telencephalon originated from a prominent basal vessel located deep on the floor of the telencephalic vesicle in the basal ganglia primordium (Fig. 2a). The basal vessel unfurled into a plexus and during the E9 to E11 interval grew in a ventral to dorsal and lateral to medial direction, straddling the lateral ventricles (Fig. 2e-i). The periventricular plexus was restricted to a ~20 µm-thick plane parallel to the pial surface and sandwiched between the ventricular and marginal zones in the E11 dorsal telencephalon (Fig. 2b-d). Narrow branches from the periventricular network joined the pial plexuses as fine, tapering vessels. The specific steps in the preparation of the whole mounts are as follows.

Histological sections or whole mounts of the embryonic mouse telencephalon are ideal for discerning and quantitatively illustrating gradients of blood vessel development following immunohistochemical labeling of the vessel components. The whole mounts are especially valuable because they permit a global view of the entire vascular network while preserving its anatomical relationships. Explants of the dorsal and ventral telencephalon maintained in culture are ideal for illustrating endothelial cell migration across telencephalic compartments. Although manipulation of the neural tube or embryonic telencephalon for preparation of the explants is a delicate procedure requiring micro-dissection expertise, the technique is a valuable tool for studying a variety of cellular and molecular mechanisms in developmental biology. Combining the explant culture, cell transplantation and siRNA technologies permitted us to study the role of specific genes in the regulation of cross-compartmental migration of endothelial cells. 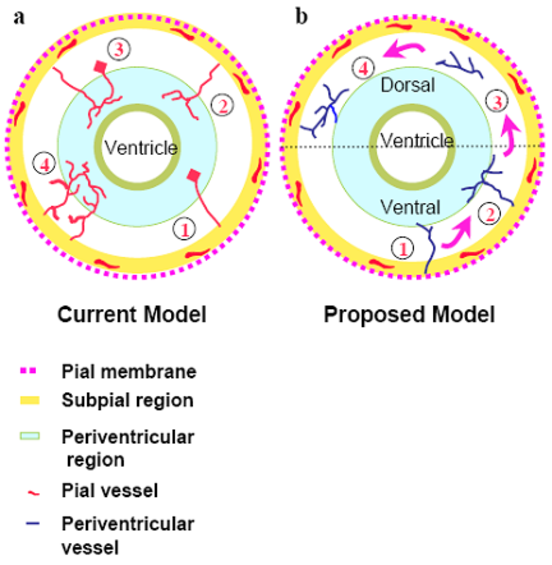 Current model of CNS angiogenesis [a; modified from reference 4] proposes that pial vessels extend radial branches towards the ventricle (ventriculo-petal branches; stage 1); form new branches upon arrival in the periventricular region (stage 2); reverse direction to grow back to the pia (ventriculo-fugal branches; stage 3); and finally branch into plexuses (stage 4). We propose an alternative model (b) in which, pial and periventricular blood vessels develop along independent schedules. The periventricular vessels are branches of the basal vessel located in the basal ganglia primordium (stage 1). The basal vessel produces an orderly lattice of periventricular branches in the ventral telencephalon (stage 2). The periventricular vessel network propagates into the dorsal telencephalon (stage 3) to produce the dorsal periventricular plexus (stage 4), controlled by ventral and dorsal homeobox transcription factors. A larger, pdf version of this figure can be found here. 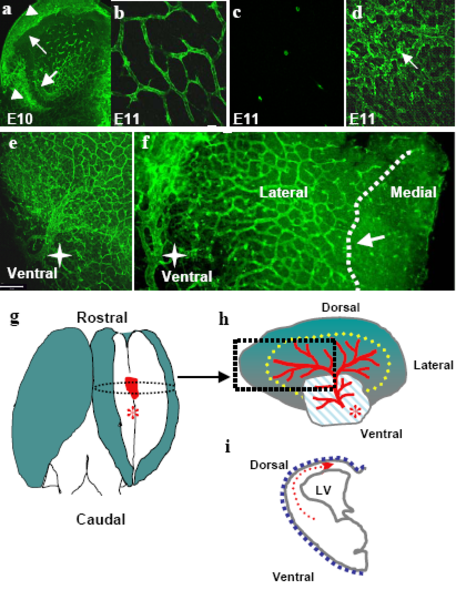 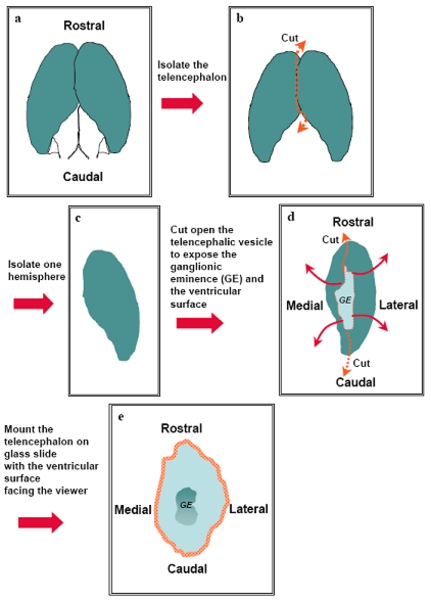 (a) The embryonic brain viewed under a dissecting microscope. (b) Each hemisphere is cut along the caudal to rostral direction and opened like a book. (c) The telencephalic hemispheres are separated from each other (d) The ganglionic eminences at the base of the telencephalon is revealed. (e) The open hemisphere is mounted flat with the ventricular surface facing the viewer. A larger, pdf version of this figure can be found here. 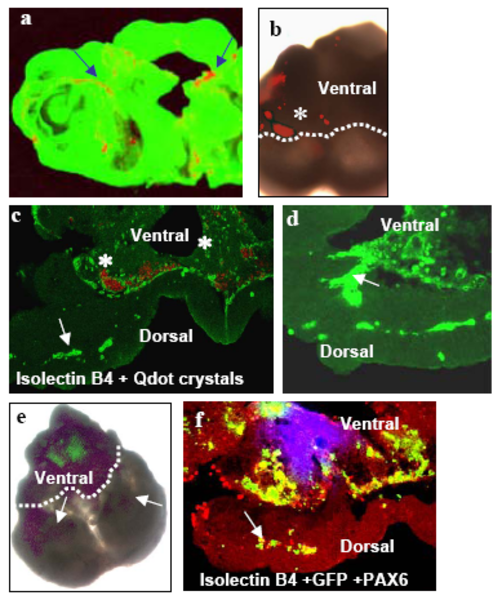 Figure 5: Migration of transplanted endothelial cells on a ventral explant 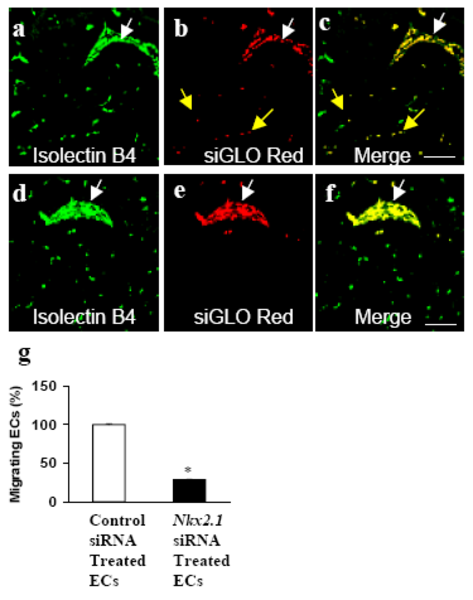