Considerable effort has been made in the past decade to unravel biological networks like protein-protein interaction. Various kinds of metabolite including small metabolites comprise a vast majority of cellular component. Hence a technique that identifies endogenous protein-metabolite interaction can reveal extensive roles of metabolites in regulation of protein activities. Several studies that feature on biological networks utilize Saccharomyces cerevisiae as the model organism. The pathogenic yeast Candida albicans remains understudied till date. We describe a new methodology that helps in identifying metabolites bound to proteins in vivo in Candida albicans. The technique employs yeast based Tandem Affinity Purification followed by methanol extraction and subsequent identification of the metabolite by UPLC- coupled ESI Mass Spectrometry. 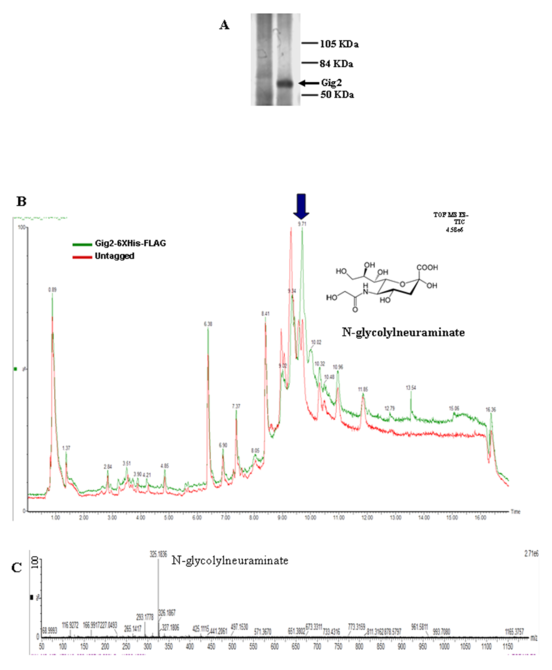 (A) After two rounds of purification and extraction in methanol, the beads were boiled and were resolved on SDS-PAGE to check for the presence of purified Gig2. (B) LC plots of the small metabolites extracted from a protein (Gig2) (green) and the negative control (untagged) (red). Peak intensity is plotted against the retention times (in minutes) of corresponding mass spectra. All traces were smoothed by the Savitzky-Golay method using two passes with a window size of three scans. (C) Combined average mass spectra of the 9.02- to 10.020-min region. The mass of the Gig2-bound small metabolite is given along with its chemical identity. The peak mass (in atomic mass units) is shown along the x axis and the peak intensity (expressed as a percentage) along the y axis. 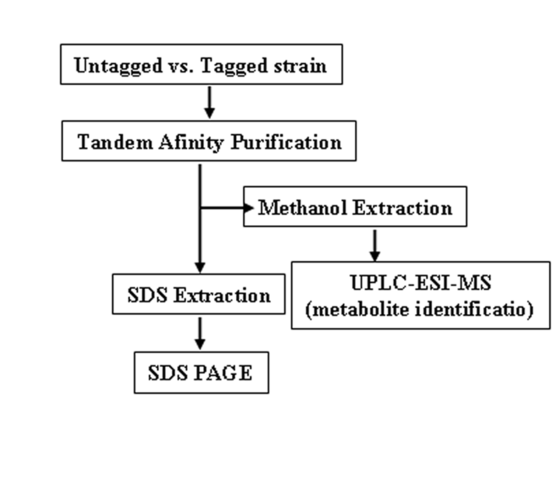 Flow Diagram depicting the protocol at a glance.