Low frequency noise gives additional informations to DC current in nanodevices such as estimation of number/position of defects in nanotransistors [1-14] and inelastic resonant energy levels in molecular devices [15-16]. It provides also the charge sensitivity limit [1,5] for sensors and memories. However, low frequency noise measurements remain marginal for device electrical characterization which is probably due to additional efforts required for non specialists to measure and analyse such signals. This is particularly true for nanodevices where current level is low and noise more difficult to measure. Here, we detail a protocol including experimental setup optimization, developed automation softwares and data analysis. An example of low frequency noise study of a silicon nanowire transistor is shown.

Measuring the power spectrum current noise of known resistors is a safe procedure to verify that the white noise of amplitude 4kT/R is measured where k is the Boltzman constant, T the temperature and R the resistance value. It also shows the maximum bandwidth of the preamplifier. Figure 4c shows such calibration procedure with 4 different resistors and Stanford research SR570 preamplifier. Frequency bandwidth is much smaller than for DL1211 preamplifier at low gains and we therefore use the latter one for noise measurement in silicon nanowires.

An example of power spectrum current noise spectra SI at different gate voltages for a silicon nanowire transistor as in [1] is shown in Figure 5a. Normalized noise makes the analyzis more direct. SI can be normalized by DC current I squared or transconductance gm squared 1,5,13. The bell shape in figure 5b is due to a maximum noise at resonant energy level for a defect located close to the silicon nanowire. It can be fitted with equations detailed in [1].

Random Telegraph Signal (RTS) is a two levels fluctuation of current mostly related to the trapping/detrapping of an electron in a defect close to the transistor’s channel [4]. Figure 5a is an example of RTS for a silicon nanowire as in [1] and Figure 5c the histogram of drain current. To evaluate up and down time constants, RTS is first cleaned as a perfect two levels system by substracting an average value (e.g. red line in Figure 5a) and getting the sign (e.g. with the functionSIGN() from Excel software). The modified signal is shown in Figure 5b and its histogram in Figure 5d. Finally, using the our web-based RTS function, we get from this point list each down and up times of our RTS (Figure 5e). If the two levels signal is not clear enough, this should be done manually.

The complete measurement and analysis of a device at different biasing points takes one working day or more if many RTSs to treat. 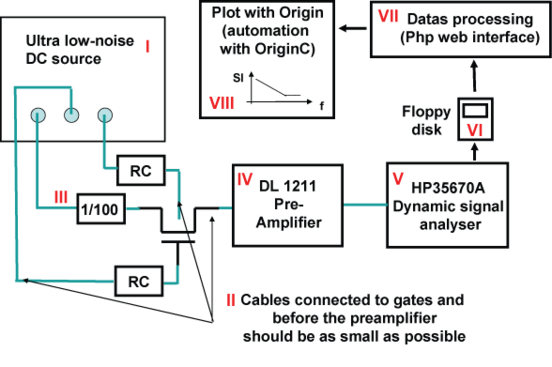 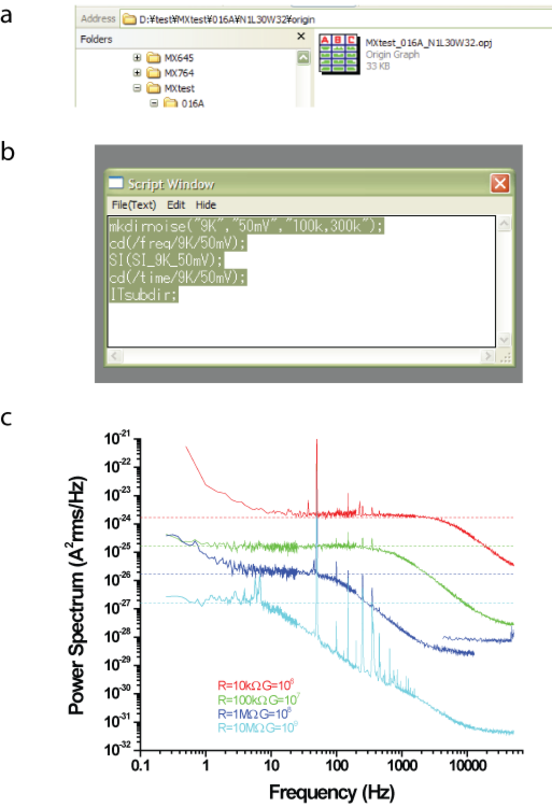 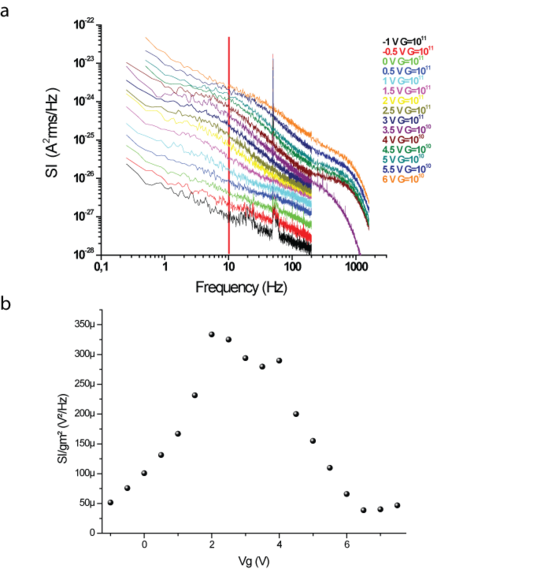 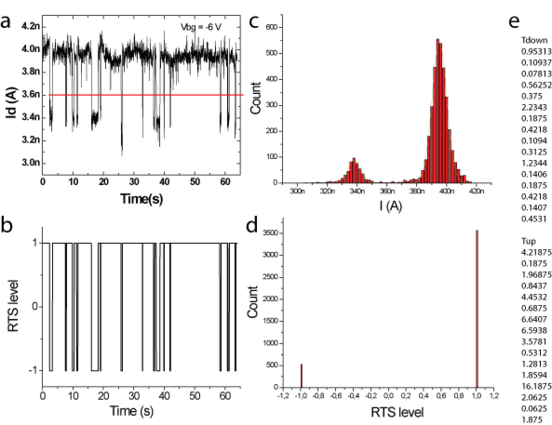