Invisible micro-patterns of trace amount molecules can be recognized through the mass spectrometry (MS) imaging technique on the engineered graphene film without additional chemicals such as organic matrix. The micro-patterns can be prepared in a controlled manner, where simple stamping was employed and diluted solution of molecules was used as the invisible ink. It is noted that due to the low concentration (pmol/µL) and detection of limit (fmol) for detection and imaging achieved in this protocol, the engineered graphene paper can be applied in not only tissue blotting for small metabolites and lipids molecules, but also forensic study to track trace amount of chemicals (such as drugs) in the latent fingerprint and record/monitor the invisible micro-pattern of specific molecules.

As one of the key fields that require strong (laser) irradiation in nature, MS imaging techniques, such as matrix assisted laser desorption/ionization (MALDI) MS, can help to visualise the spatial distribution of molecules without purification, extraction, separation, or labelling of bio-samples, which are important in early stage disease diagnosis and forensic applications. (1, 2) Despite the substantial progress, the application of MALDI MS towards small molecules is limited because the matrices (normally small organo molecules like α-cyano-4-hydroxycinnamic acid, CHCA) introduce significant background signals during laser ablation in the low molecular weight range (< 1000 Da). In addition, the large and irregular sizes of the matrix crystals (> 10 µm) and sweet-spot effects limit the imaging spatial resolution and detection efficiency. (3, 4) To date, overcoming the low sensitivity of MS based imaging towards small molecules and the preparation of stable functional materials under irradiation represent the key challenges to the field.

To address the above challenges, matrix-free MS techniques have been developed.(3-14) Secondary ion MS (SIMS) was one of the first matrix-free approaches used to detect and image molecules from biological samples using a high-energy primary ion beam to desorb and generate secondary ions from a surface. (15, 16) For matrix free MS imaging applications, an ideal substrate should have the following attributes: (1) stable with minimum matrix interference; (2) able to provide sufficient surface area and desirable interaction with analyte molecules; (3) electric conductive with high electron mobility and efficient in laser absorbance for desorption/ionization; and (4) homogeneous in surface for reproducibility and faithful replication of imaging. (3, 4, 17)

The preparation/imaging of the micro-pattern may take 3-8 hours depending on the size of imaging area and detailed set-up, except for the preparation of engineered graphene films.

As indicated in Figure 1c, d, the signals of DOTAP at m/z of 662 ([C42H80NO4]+) and 380 ([C42H80NO4-C18H33O2]+) are monitored and shown in red and green, respectively. Compared to the invisible state, when the engineered graphene paper is used as the substrate for MS imaging, the ‘AIBN’ pattern is clear and fully resolved. It is noted that due to the low concentration (pmol/µL) and detection of limit (fmol) for detection and imaging achieved in our study, the engineered graphene paper can be applied in not only tissue blotting for small metabolites and lipids molecules, but also forensic study to track trace amount of chemicals (normal concentration ~nmol/µL, such as drugs) in the latent fingerprint and record/monitor the invisible micro-pattern of specific molecules.

The authors acknowledged Amanda Nouwens for the helpful discussions.

Figure 1: The digital image of the fabricated ‘AIBN’ stamp/stamped film and the MS imaging patterns. 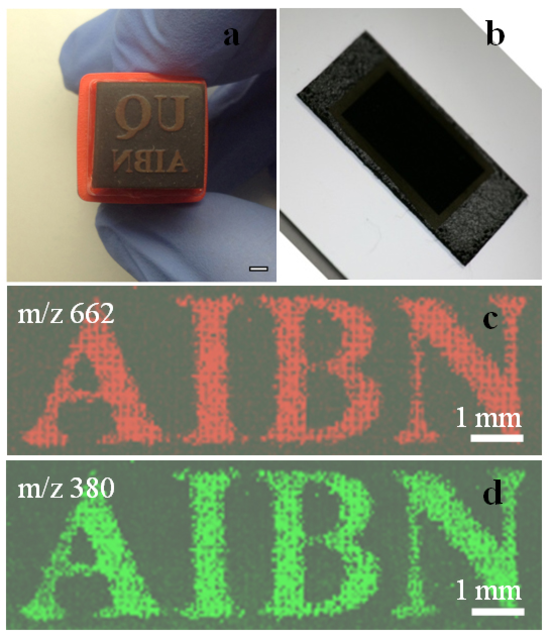 (a) Digital image of the fabricated ‘AIBN’ stamp. Only ‘AIBN’ was used in imaging and ‘UQ’ was not included. The size of the stamp is 1 cm X 1 cm and the size of the letters in ‘AIBN’ is ~ 2 mm in height. (b)Digital image of the stamped film. The central dark black area (laser engineered area) has been stamped with ‘AIBN’. MS imaging patterns of ‘AIBN’ at m/z of (c) 662 and (d) 380 on the engineered graphene film, respectively.