The activation of sensory neurons in Caenorhabditis elegans is triggered by calcium entry through calcium channels. As the majority of the neurons in C. elegans probably do not have action potentials through voltage-dependent sodium channels, but rather utilize rapid activation of voltage-gated calcium channels1-4, calcium imaging is a useful technique for measuring neuronal activity2, 5, 6. In particular, genetically encodable calcium indicators such as cameleon and GCaMP are useful for measuring neuronal activity. We recently reported that a pair of sensory neurons, ASJ, in the head of C. elegans negatively regulate temperature habituation-linked cold tolerance7. Most wild-type animals cannot survive at 2°C for 48 h after cultivation at 20–25°C, while wild-type animals can survive at 2°C after cultivation at 15°C. This cold tolerance is established 3 to 5 hours after the cultivation temperature is changed from 25–15°C or 20–15°C. To elucidate the physiological property of thermo-sensory neurons in the formation of temperature experience for temperature tolerance, chronic measurement of neuronal activity is important. In previous reports, however, measurement time of neural activity of thermo-sensory neurons by calcium imaging is only approximately 10 min. In this paper, we describe a detailed protocol for long term calcium imaging for measuring thermo-sensory neurons in C. elegans.

We used 100 ms/s pulsed-light for the excitation of cameleon (440 nm wavelength). 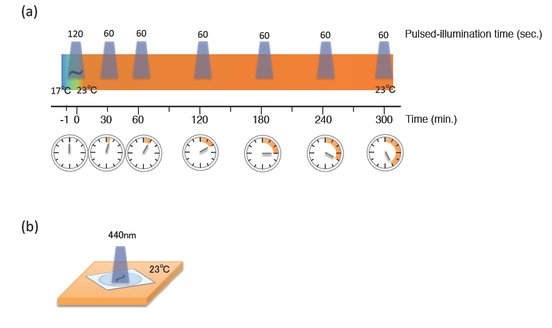 Figure 1: Long-term calcium imaging of ASJ sensoryneuron. (a) Chronic calcium measurements in ASJ neurons to measure prolonged response of ASJ neurons to a step in temperature. Wild-type animals carrying the trx-1(ASJ) promoter::yc3.60 are used. Temperature is increased from 17 to 23°C and ASJ activity measured for 120 s. The temperature of the agar pad is maintained at 23°C for 5 h. ASJ neuron activity is measured for 60 s every 60 min from 60 min to 5 h. (b) The animal is immobilized by polystyrene microspheres on 10% agar pads on glass, and the coverslip then mounted. Sample slide on a thermocontroller. 440 nm wave length light is used for excitation of cameleon in ASJ sensoryneuron.