The modification of mammalian cells by the expression of multiple genes is a crucial technology in modern biological research. MultiLabel allows the modular assembly of independent expression units in a single plasmid which can be used for transient and stable modification of cells. In contrast to other methods, the assembly of the expression cassettes does not require restriction enzymes since it is recombination based. Here we describe strategies how genes of interest are efficiently cloned into MultiLabel vectors and how these expression vectors can be assembled by a Cre/LoxP reaction to a multigene plasmid. In addition, we describe how such plasmids are used to generate stable cell lines. Cloning and assembling of up to three plasmids is possible within two weeks, the insertion of a fourth and fifth expression cassette within another two weeks, and the generation of a stable cell line takes one to two months.

The simultaneous expression of multiple proteins in mammalian cells is an important technology in contemporary biological research. For instance, the coexpression of several fluorescently tagged sensors allows the concurrent observation of multiple parameters in living cells (1). In addition, the simultaneous insertion of several genes is often necessary to change the fate of a cell e.g. when generating induced pluripotent stem cells (2). Finally, the molecular and structural analysis of multiprotein complexes needs the heterologeous expression of proteins in an appropriate host.

Many strategies were developed in the last years to overcome the currently existing technical limitations. Cotransfection of independent expression constructs is the easiest strategy but it leads to a heterogeneous cell population with variable expression levels. It becomes especially inefficient if the cell line is difficult to transfect and if more than three proteins need to be expressed. Coinfection with numerous viruses may help, but the handling of viruses needs special safety requirements (3). The different expression units can be assembled in a large plasmid with restriction enzymes but this strategy can not be standardized due to the limited number of restriction enzymes and the occasional occurrence of their recognition sites in genes of interest. IRES-based constructs are often used for the expression of two proteins (4). Multiple proteins can also be expressed as a large precursor protein which is then processed by (self-) cleavage into its individual proteins. This strategy leads to proteins with modified N- and C-termini interfering sometimes with the functionality of the protein (5).

We previously used Cre/LoxP-mediated recombination to assemble multiple independent expression units in a single plasmid for production of protein complexes in Sf21 and E.coli cells for structural analyses (6 7). Recombination-mediated assembly has the advantage that no restriction enzymes are necessary and that the expression vectors are therefore freely interchangeable. In addition, no special equipment laboratories are required. We recently developed a set of vectors, called MultiLabel, which allows the Cre/LoxP mediated multigene expression in mammalian cells (8). It is possible to combine one acceptor vector with up to 4 donor vectors. These vectors have minimal backbone size to maximize transfection efficiency and they contain elements for the generation of stable cell lines (Supplementary Fig. 1). Here we describe the necessary steps to generate stable cell lines including cloning of the genes of interest in a MultiLabel vector backbone (Fig. 1A, steps 1 – 3), Cre/LoxP-mediated assembly of these vectors (Fig. 1B, steps 4 – 6), and transfection and selection of mammalian cell lines (Fig. 1C, steps 7 – 13).

The choice of the appropriate acceptor vector is crucial for the successful application of our method. Ideally, the acceptor vector contains the gene of interest which is part of all planned multigene expression plasmids and which remains unmodified in all assemblies. The currently available acceptor vectors contain different resistance genes for the selection of stable cell lines. We recommend the use of pSI-AKR8 which contains a zeocin and a G418 resistance gene. These two genes are separated by a homing endonuclease site (I-SceI) which can be used for linearization prior to transfection (Figure 1C). Several acceptor vectors contain an FRT site from the Flp-In system of Invitrogen. The Flp-In system allows the Flippase-mediated integration of a plasmid at a defined site of the genome of a mammalian cell with an FRT site. We successfully integrated plasmids with a size up to 15 kb with this strategy. The choice of the donor vector is less crucial. These vectors are available with four different antibiotic resistance genes (ampicillin, spectinomycin, chloramphenicol, and gentamycin). A version with and without a cleavage site for the homing endonuclease I-CeuI exists for each antibiotic resistance gene. Additional expression cassettes can be inserted at this site by conventional cloning (see Supplementary Fig. S6 in Kriz et al. 2010 for details). Note that this site must not be used for the linearization step for the generation of stable cell lines because linearization at this point prevents expression of the upstream expression cassette.

Classical cloning with restriction enzymes is described in the protocol but other methods such as SLIC or PCR-based methods can be used as well (9, 10). This is possible since not only the cloning sites are identical in all MultiLabel plasmids but also the adjacent 15 bp. The vectors do not contain a classical multi-cloning site. We used instead SapI (LguI) sites which allow seamless cloning (see Supplementary Figure S1 in Kriz et al. 2010 for details). This approach is not recomended if the gene of interest contains an internal SapI (LguI) site.

Circular plasmids are the first choice for transient transfections, but the plasmids must be lineralized for the generation of stable cell lines. We never obtained a cell line expressing four or five transgenes when using circular plasmids. The described method applies to the generation of stable porcine aortic endothelial cells (PAEC) and human embryonic kidney (HEK) cells. For other cell types, the method of transfection and the concentration of the selection antibiotics have to be adjusted.

The text for the entire protocol can be found here: Protocol in its entirety.doc 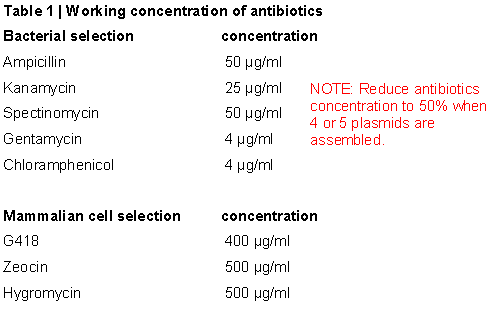 Construction of MultiLabel vectors with a single expression cassette

A. First option: This strategy inserts an existing expression cassette into MultiLabel vectors by conventional cloning. An existing expression cassette of a pcDNA (Invitrogen) or pEGFP-type (Clontech) vector is amplified by PCR using primers containing AscI and PacI restriction enzyme sites, and then cloned into a AscI- / PacI- cut MultiLabel vector (Fig. 2A). This strategy does not work, if your fragment contains an AscI or PacI site (in this situation ligate 3 fragments, use SLIC or a PCR-based method as described in option 1C).

B. Second option: This option describes the insertion of a gene of interest downstream of the coding region of a fluorescent protein by conventional cloning. MultiLabel vectors contain two SapI (LguI) restriction sites which generate non cohesive ends that can be used to exchange the linker fragment with your gene of interest (Fig. 2B). Make sure the SapI recognition sequence is not present in the genes you are cloning.

C. Third option: Seamless cloning using restriction free methods can be used to insert DNA sequences at any place of MultiLabel vectors. Add a 15–20 bases 5′-tail to the primers containing DNA sequences that are homologous to the sequences flanking the site of insertion into the MultiLabel vector. The described primers bind to the 3’ end of the CMV promoter (RF-CMV-for) and to the5’ end of the poly A signal (RF-PolyA-back, Fig 2C). This method has two PCR steps. In the first PCR the gene of interest is amplified and this PCR fragment replaces in the second step the linker of the MultiLabel vector.

Steps 1Ai, 1Bi, 1Ci, and 1Civ It is critical to use a high fidelity proof-reading polymerase with a low error rate. We use Phusion high-fidelity DNA polymerase in 2× HF buffer, but the use of other polymerases is possible. The use of the wax beads reduces non-specific amplification during the PCR. Other hot start methods than wax beads are applicable but more expensive.

2.Use 0.5 μl of ligation or restriction free reaction to transform competent E. coli cells (TOP10 or DH10 for acceptor plasmids or BW23474 for donor plasmids) and select on LB agar plates containing the appropriate antibiotic for selection (depending on the vector of choice; see Table 1). Incubate overnight at 37°C.

4.Set up plasmid assembly reactions for 3 MultiLabel vectors in a 10 μl volume.

Linearization of the multigene plasmid

7.Set up preparative restriction digestion reaction in 50 μl volume each:

9.Measure the concentration of the linearized multigene plasmid.

Note that this is our lab standard cell culture protocol for transfection of HEK293 and PAE cells. The protocol may need some adaptations or other cell types.

10.Plate HEK293 or PAE cells 6-9 hours prior transfection in 10cm dishes. Cells should be 30-40% confluent prior to transfection.

12.Cells are passed into 2-4 10 cm plates 40 h after transfection in different dilutions (1:2, 1:5, and 1:20). Add selection drug one day after replating (Table 1). Replace medium once or twice per week, always add drug. Colonies are visible within 14-21 days and should be picked (clone rings with grease for PAE cells or filter cloning discs (Sigma) for HEK293 cells). Transfer colonies to 1cm wells and grow in presence of selection drug. Pass into 3.5 or 6cm plates and freeze aliquots.

Figure 1: Workflow of the method.

Figure 1: Workflow of the method 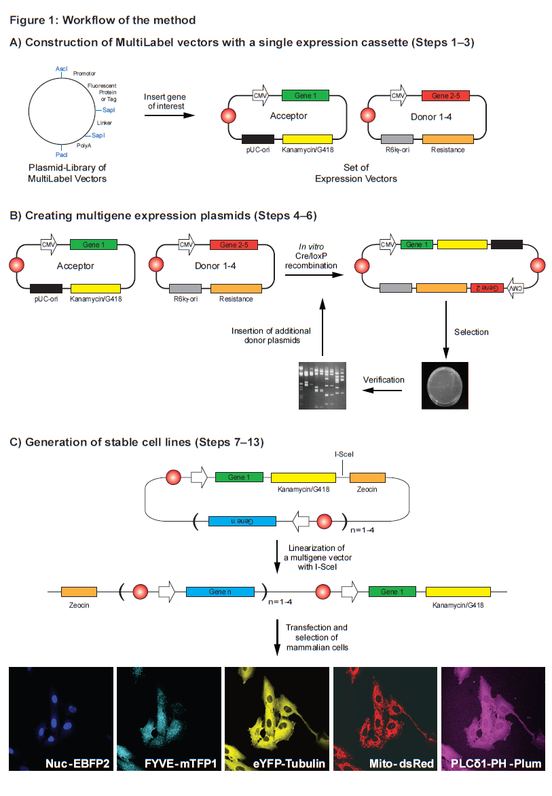 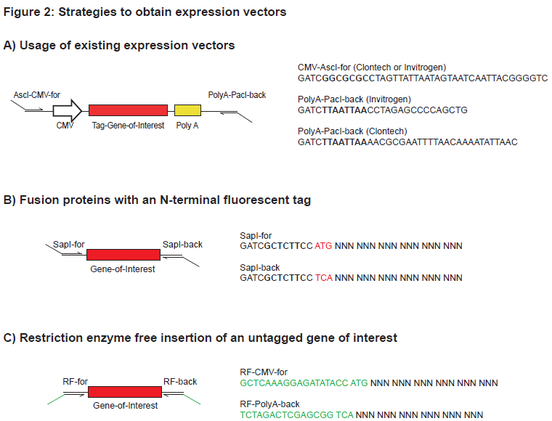 Word Document 2: Protocol in its entirety