Telomeric chromatin organization studies using Chromatin Immunoprecipitation (ChIP) might be challenged by the presence of Interstitial Telomeric Sequences (ITSs). In this protocol we describe a method to study the chromatin structure of telomeres independently of ITSs by analyzing ChIP-seq data. This method has been used successfully in Arabidopsis thaliana and could be applied to other model systems including humans. It could greatly speed the knowledge of telomeres biology and their influence in aging, illness or cancer. The method requires that the mean telomeric lengths of the biological sources to be studied are known as well as the built DNA sequence of their chromosomes. First, the numbers of sequences with four or more perfect tandem telomeric repeats are determined in silico at ITSs. These numbers are normalized to the corresponding numbers of sequences of the same type present at telomeres. Those sequences for which the ITSs/telomeres ratios are lower than 2% can be selected to analyze telomeres in ChIP-seq experiments. The ChIP-seq experiments to be studied should be suitable for telomeric chromatin structure analyses and render reads longer than the telomeric sequences selected. Finally, the levels of telomeric enrichments are determined and represented together with the values corresponding to the rest of the genome. This is the first protocol described to integrate telomeres independently of ITSs into genome-wide studies of chromatin organization.

Telomeres are essential for genome stability, which requires the integrity of their length and chromatin structure. Telomeric DNA usually contains tandem repeats of a short G-C rich motif that are also present at internal chromosomal loci in different model systems including Arabidopsis or humans (1-7).

We have described two procedures based on ChIP experiments to analyze the chromatin structure of telomeres independently of ITSs in Arabidopsis thaliana (12,13). In the first procedure, we performed ChIP experiments followed by digestion with the frequently cutting restriction enzyme Tru9I (12). Since telomeres in Arabidopsis and in other model systems are essentially composed of perfect telomeric repeat arrays, they remain uncut after digestion with Tru9I (6). In contrast, Arabidopsis ITSs are frequently cut because they are composed of short arrays of perfect telomeric repeats interspersed with degenerated repeats (6,14-16). Thus, when Arabidopsis genomic DNA is digested with Tru9I and hybridized with a telomeric probe, most of the signals corresponding to ITSs disappear (6). The use of Tru9I has allowed us to discover that Arabidopsis telomeres exhibit euchromatic features. They are labelled with euchromatic marks like H3K4me2, H3K9Ac and H4K16Ac (12). However, this procedure is laborious.

More recently, we have developed a second method to analyze the chromatin structure of Arabidopsis telomeres independently of ITSs by analyzing ChIP-seq data (12). Previous genome-wide chromatin structure studies performed by ChIP-seq did not differentiate between telomeres and ITSs. The application of this second method have confirmed our previous results and have shown that Arabidopsis telomeres associate with histone H3.3, which is incorporated in transcriptionally active regions, and are labelled with H3K27me3, a repressive euchromatic mark established by the PRC2 complex (12,17). We interpreted that the presence of these epigenetic marks at telomeres might be due to their special chromatin organization or to the dynamic nature or their epigenetic marks (17).

Here, we describe a general and detailed protocol to analyze telomeric chromatin structure independently of ITSs by using ChIP-seq data. It can be applied to different model systems including humans.

Following, we describe the step-by-step procedure and remark some key features that should be taken into consideration. All the steps of the protocol are summarized in Figure 1. Those steps marked with an asterisk include some comments in the troubleshooting section. In addition, we have applied part of this protocol to several model organisms (see Table 1). Columns with red numbers in Table 1 correspond to the different steps.

We recommend to check the suitability of the ChIP-seq experiments for telomeric chromatin structure analyses. Specific quality controls should be performed. It might happen that a ChIP-seq experiment is fine to analyze genome-wide aspects of chromatin organization but not to analyze telomeres. This is because single sequences are used for the analysis of telomeres and some bias can arise along the ChIP-seq experiments during the cloning, amplification or sequencing of the telomeric sequences. The special architecture and repetitive nature of telomeres might favour those problems. The study of ChIP-seq experiments that have been repeated at least twice, starting with different samples of the same biological source, should help in this task. If similar results are obtained in the different repetitions of the same experiment, we consider the resulting ChIP-seq data suitable for telomeric chromatin structure analyses. See troubleshooting 6-1.

If previously published ChIP-seq experiments are analyzed, we recommend calculating the percentage of four tandem telomeric repeat reads in the input samples. In addition, we also recommend to calculate the number of four tandem telomeric repeat reads versus the number of reads corresponding to another genomic sequence, also in the input samples. Both types of numbers should remain similar in different experiments. However, we would rather prefer to analyze repetitions of the same ChIP-seq experiment that had been started with different samples of the same biological source. In this way, the bias of the immunoprecipitated samples should also be controlled. See troubleshooting 6-2.

We also recommend performing telomeric analyses using more than one telomeric sequence for each ChIP-seq run, if possible. Similar results should be obtained with sequences containing different number of perfect telomeric repeats, as far as the quality of the reads is good. See troubleshooting 6-3.

This method can be applied to any model system, excluding those that contain many more perfect tandem telomeric repeats at ITSs than at telomeres. In addition, it could be used to analyze telomeric chromatin structure from previously published ChIP-seq experiments.

Our group has previously analyzed the chromatin structure of telomeres independently of ITSs using a frequently cutting restriction enzyme. However, the method described here is easier to achieve, can be applied to experiments already reported and to future ChIP-seq experiments.

The following considerations should be taken into account in the following steps of the procedure:

The mean telomeric length of different Arabidopsis organs have been determined by TRFs and have been found to be very similar (21).

5-1) We have selected a 2% ratio to play safe. There is always certain level of background when ChIP experiments are performed. For example, let’s imagine that a promoter (seq A) is associated with a transcription factor and another DNA sequence (seq B) is not associated with it. If ChIP experiments are performed with antibodies against the transcription factor and the enrichment level of seq A versus seq B is analyzed by PCR, an enrichment level of 5-10 folds of seq A versus seq B would be a very good result. In these cases, it would be concluded that the transcription factor associates with the promoter (seq A). However seq B is still being pulling down in the ChIP experiment because of the experimental background of the technique. Therefore, in ChIP-seq experiments, a sequence composed of perfect tandem telomeric repeats that is poorly found at ITSs should not reflect the epigenetic status of ITSs because the telomeric background would impaired it. This sequence should reflect the epigenetic characteristics of telomeres.

5-2) A stretch of perfect tandem telomeric repeats found more than 2% of the cases at ITSs might also be used for this procedure, whenever the level of background allows it. This background could be estimated for different organisms and experimental conditions by PCR (12).

6-1) Telomeric chromatin structure analyses using ChIP-seq data have been previously reported in humans but without considering ITSs (22-24). In one study focused on CD4+ T-cells, telomeres were found to be enriched in H3K4me3 (an euchromatic mark) and under-represented in H3K9me3 (an heterochromatic mark) (22). In another study focussed on different human cell lines, telomeres were found to be enriched in H3K9me3 (23). The different results obtained in these two studies might be due to the different biological sources studied or to the different number of telomeric repeats used to analyze telomeres, which were not clearly stated in any of the manuscripts. However, they could also be due to the bias generated during the experimental procedure followed to obtain the ChIP-seq data. This concern emphasizes the need to determine the suitability of the ChIP-seq studies for telomeric chromatin structure analyses.

Figure 1: Schematic representation of the steps of the protocol 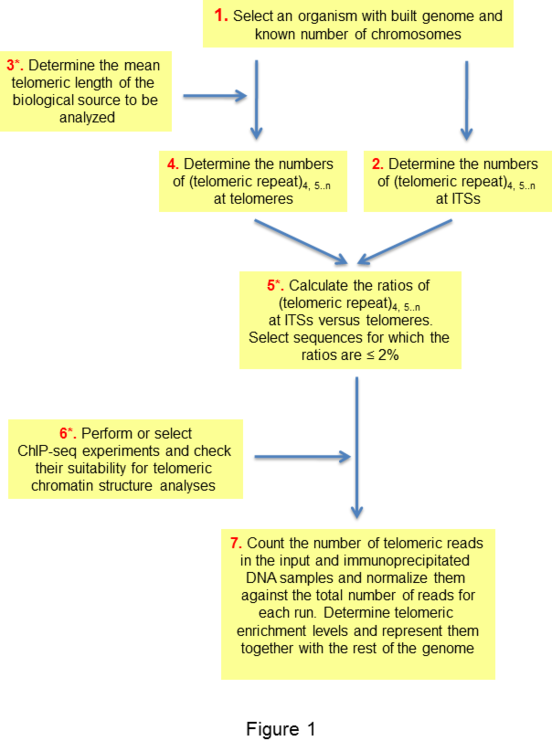 Those steps marked with an asterisk include some comments in the troubleshooting section.

Table 1: Determination of the number of tandem telomeric repeats that could be used to analyze telomeric chromatin structure in different organisms 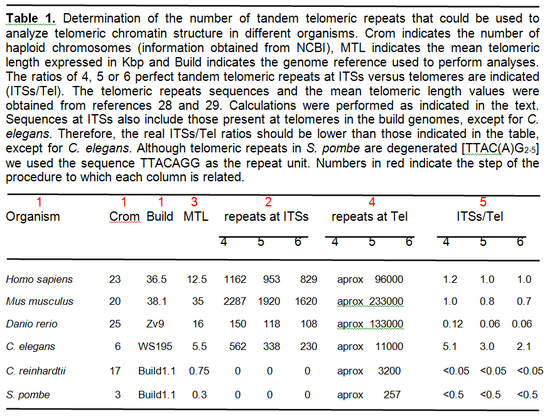 Figure 1 as a powerpoint slide: Schematic representation of the steps of the protocol

Those steps marked with an asterisk include some comments in the troubleshooting section.

Table 1 as a Word file: Determination of the number of tandem telomeric repeats that could be used to analyze telomeric chromatin structure in different organisms