Recent research resulted in the development of several 1D protein structure descriptors. They provide an important alternative for analysis/prediction of the protein structure/function. Numerous computational methods that provide accurate prediction of these descriptors from the protein sequence were proposed; they include secondary structure (1-5), secondary structure content (6-9), structural class (10-17), fold type (18-25), relative solvent accessibility (26-32), contact order and number (33-37), and residue depth (38). Recent work shows that the tertiary structure can be recovered from three 1D descriptors (39).

We developed a server that integrates predictions of several related descriptors including structural class (17), fold type (23), and secondary structure content (9). The knowledge of these three descriptors was applied in various areas including tertiary structure prediction (40), identification of domain boundaries (41), analysis of protein interactions (42) and prion proteins (43), discrimination of outer membrane proteins (44,45), and in prediction of secondary structure (46), coding and noncoding RNAs (47), folding and unfolding rates (48-52), folding transition-state position (53), DNA-binding sites (54), and enzyme proteins and their class (55,56). Our server, iFC2 (Integrated prediction of Fold, Class, and Content), is the first to exploit relations between the three descriptors, which are used to develop a cross-evaluation procedure that improves their predictions. iFC2 predictions provide higher quality than the predictions of the individual methods. The server is located at http://biomine.ece.ualberta.ca/1D/1D.html.

A single or multiple (up to 10) protein sequences to be predicted should be provided in FASTA format.

The user needs a computer with access to Internet and a Web browser.

2.) Use the prediction server.

To use iFC2 server, access the prediction page at http://biomine.ece.ualberta.ca/1D/1D.html. Enter the protein sequences into the “Enter protein sequence(s)” box. The sequence has to be provided in FASTA format and the user is allowed to enter up to 10 sequences at the time. The prediction will be executed sequentially and automatically for all entered sequences. The “Example” button fills the box with an example of FASTA formatted sequence. The “Reset” button clears the contents of the box.

There are 4 options, see Figure 1. The user can either perform single prediction task, i.e., secondary structure content prediction with PSSC-core (9), structural class prediction with SCEC (17), and fold type prediction with PFRES (23), or (s)he can use the integrated iFC2 server (by pressing on the ‘all methods’ button), which predicts the three targets at the same time. If iFC2 server is chosen, the cross-evaluation will be performed automatically. After choosing the prediction task, the user should press “Start” button. In the case when sequences entered in the “Enter protein sequence(s)” box do not adhere to the FASTA format, an error window that describes the problem will be displayed and the user will be asked to correct the formatting.

The computational time depends on the length of the sequence. Execution of PSSC-core (9) (for secondary structure content prediction) takes about 10s for a protein sequence consisting of 200 amino acids. Average time to run SCEC (17) (for structural class prediction), PFRES (23) (for fold type prediction), and iFC2 for a sequence of about 200 amino acids is about 2mins for each method.

If the server does not accept the input protein sequence for prediction, the error might be caused by one of the following reasons:

The quality of predictions of PSSC-core (9), SCEC (17), and PFRES (23) is evaluated and discussed in the corresponding publications.

Independent tests of the cross-evaluation procedure of iFC2 server show that:

This work was supported in part by iCORE, Alberta Ingenuity Fund, and NSERC (Natural Sciences and Engineering Research Council of Canada).

Figure 1: The interface for accessing the iFC2 server. The web page is located at http://biomine.ece.ualberta.ca/1D/1D.html. The full size version of this figure can be found here.

Figure 2: Example prediction results computed with iFC2 server. The full size version of this figure can be found here. 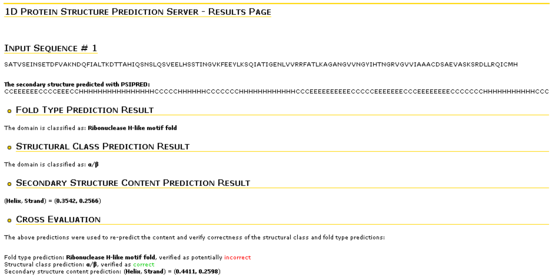