Luciferase-mediated bioluminescence is widely used as a reporting tool for monitoring various biological processes in vitro and in vivo. Firefly (1), Renilla (2), and Gaussia (3,4) luciferases are currently used as reporters for monitoring of numerous processes in different fields (5), including immunology (6) oncology (7), virology (8), and neuroscience (9). After systemic substrate injection, a cooled charge-coupled device (CCD) camera can be used for the localization of the luciferase photon signals in vivo. In addition, the naturally secreted and non-ATP dependent Gaussia luciferase (Gluc) expression levels can be easily quantified in cell-free conditioned medium by adding its substrate coelenterazine and measuring emitted photons using a luminometer.

Since Gaussia luciferase is naturally secreted from mammalian cells in culture (4), it is secreted into the blood of animals harboring cells expressing this reporter enzyme. Further, expression levels via a constitutive promoter is proportional to cell number irrespective of location of cells in the body, while levels under a physiologic responsive promoter should reflect the physiologic state of the tissue in which the cells were located. Here, we present the protocol for measuring the level of the naturally secreted Gaussia luciferase in few microliters of blood as a quantitative index of the number of cells expressing it. The level of Gluc blood in the blood can be used to monitor tumor growth and response to therapy, as well as the survival and proliferation of circulating cells such as stem cells and T-lymphocytes in vivo. The Gluc blood assay allows a convenient and quantitative assessment of in vivo luciferase reporter activity and should be a significant aid in the monitoring of biological processes in experimental animals.

In vivo studies. All animal studies should be performed with relevant institutional guidelines and regulations.

In vitro detection of Gluc-expressing cells. Expect a linear curve of the Gluc signal with respect to cell number as well as with respect to time as an index of cell proliferation. For typical results, see Badr et al., (2007) (3).

Monitoring of Gluc activity in vivo. Expect a linear curve between different amount of implanted cells and the Gluc signal obtained by either the blood assay or in vivo bioluminescence imaging using the CCD camera (Fig. 1a & b). Also, expect an increase in the Gluc signal with respect to time (Fig. 1c). 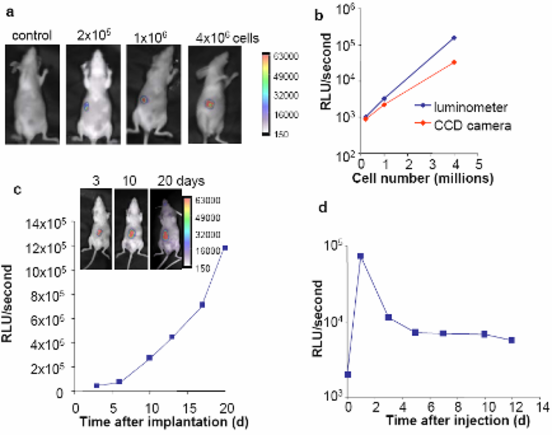