From cells to muropeptide structures in 24 h: Peptidoglycan mapping by UPLC-MS

Peptidoglycan (PGN) is ubiquitous in nearly all bacterial species. The PGN sacculus protects the cells against their own internal turgor making PGN one of the most important targets for antibacterial treatment. Within the last sixty years PGN composition has been intensively studied by various methods. The breakthrough was the application of HPLC technology on the analysis of muropeptides. However, preparation of pure PGN relied on a very time consuming method of about one week. We established a purification protocol for both Gram-positive and Gram-negative bacteria which can be completely performed in plastic reaction tubes yielding pure muropeptides within 24 hours. The muropeptides can be analyzed by UPLC-MS, allowing their immediate determination. This new rapid method provides the feasibility to screen PGN composition even in high throughput, making it a highly useful tool for basic research as well as for the pharmaceutical industry.

The bacterial cell wall is mainly composed of peptidoglycan (PGN). Since its first isolation in 1951 by Salton and Horne (1) PGN composition has been intensively studied with various methods. The original determination of the glycan and peptide composition was performed by paper chromatography (2). The breakthrough was by Glauner in 1988 (3), who for the first time applied high pressure liquid chromatography (HPLC) technology on the analysis of muropeptides. Muropeptides result from enzymatic digestion of the glycan strands into disaccharides, with part of them still being cross-linked by peptides to various extensions. Glauner extensively studied the effects of pH, buffer concentrations, and temperature on HPLC separation of muropeptides of the Gram-negative bacterium Escherichia coli. Later, a protocol for PGN isolation and HPLC analysis of the Gram-positive Staphylococcus aureus was established by deJonge et al. (4). Basically, these two protocols have been used ever since. However, both of them are very time consuming taking about a week to obtain pure PGN. Both protocols rely on multiple boiling steps with sodiumdodecylsulfate (SDS), which has to be washed out by extensive ultracentrifugation steps for about an hour each. Last year a protocol for isolation of E. coli PGN for ultra-performance liquid chromatography (UPLC) analysis was reported, that is substantially shorter (5). However, it still relies on washing in an ultracentrifuge thereby limiting the amounts of samples that can be prepared in parallel.

We established a purification protocol which can be completely performed in 2 ml reaction tubes, allowing the isolation of up to 48 samples in parallel or even in 96 well plates, yielding pure muropeptides in 24 hours. The muropeptides can be subsequently analyzed by UPLC. This reduces the amount of sample needed and the analysis time from about three hours (HPLC) to 70 min per sample. In addition, the LC conditions were adapted to mass spectrometry (MS) with suitable solvents so that the whole PGN can be directly analyzed by UPLC-MS. This allows for muropeptide determination without first collecting and desalting LC peaks and results in a complete PGN mapping. Taken together, the whole procedure is reduced from about two weeks to 24 hours. Furthermore, this fast isolation method also makes it much easier to obtain larger amounts of PGN which can be used to collect special muropeptides that can then be tested for their ability to stimulate the immune system (6).

As an example for PGN isolation by this new method, UPLC analysis and MS-mapping are presented in Fig. 1 and Fig. 2. For Gram-positives we used Staphylococcus aureus (S. aureus) SA1137 and for Gram-negatives Escherichia coli (E. coli) Nissle 1917 (8). The complete results of the muropeptide composition of S. aureus are given in Tab. 1 and in Tab. 2 for E. coli.

The presented step-to-step protocols are applicable to Gram-positives as well as to Gram-negatives. All solutions and buffers are given in Tab. 3. For different specifications there are two protocols available. The protocol for midipreparation ( Tab. 4 ) results in sample amounts suitable for several analyses. From 2 ml of culture of OD578 ≈ 10 about 300 µl purified PGN are gained. The minipreparation protocol ( Tab. 5 ) can be performed in a 96 well plate and gives just enough material for one sample for UPLC/MS analysis. For different growth parameters, use a divisible 96 well plate. Use a multichannel pipette for all resuspension steps.

UPLC gradient conditions are given in Tab. 6.

For troubleshooting please refer to Tab. 7 for both protocols.

Exemplary analysis of S. aureus SA113 by UPLC and UPLC-MS

The methicillin sensitive S. aureus strain SA113 was grown over night in BM medium. We isolated its PGN and analyzed it by UPLC as well as by UPLC-MS. This enabled us to directly determine the masses of all muropeptide peaks we got by UPLC separation ( Fig. 1 ). The total ion current (TIC) chromatogram obtained by UPLC-MS was almost identical to the UV pattern of UPLC alone with two exceptions: 1) Retention time of the peaks in the quaternary UPLC was about 1 min longer than in the binary UPLC-MS system. Therefore, in Tab. 1 only the TIC retention times are given. 2) The signal of some muropeptides, that turned out to be O-acetylated, were stronger in the TIC than in the UV (e.g. peaks 9 in Fig. 1a and b).

The UV chromatogram of the UPLC as well as the TIC chromatogram of the MS show the expected pattern as it had been published before for the methicillin resistant S. aureus COL by de Jonge et al. in 1992 (4,9). By coupling UPLC to MS we could directly determine the masses and subsequently the potential structures of almost all peaks. The obtained masses verified that the main peaks (peaks 5, 11, 15, 16, 17 and 18) contained the expected muropeptides that had already been determined before (4,10). We mapped the whole PGN of S. aureus SA113 up to the hexameric cross-linked muropeptide. The complete results of our PGN mapping of S. aureus SA113 is given in Tab. 1. All structures were drawn by ChemDrawUltra 13.0 (PerkinElmer), which automatically calculated the mass of the molecule and the proposed sum formula. The latter is given. As can be judged by the peak forms in the UPLC chromatogram, most peaks are composed of several muropeptides. While all of them have the same basic structure (MurNac-GlcNac with stem peptide and Gly5 interpeptide bridge), several modifications were detected.

Exemplary analysis of E. coli Nissle 1917 by UPLC and UPLC-MS

As an example for Gram-negative bacteria we grew E. coli Nissle 1917 overnight in LB medium and isolated its PGN. The PGN was digested by mutanolysin and analyzed by UPLC and UPLC-MS ( Fig. 2 ). Again, the UV pattern was very similar to the TIC chromatogram and we could determine the masses of most muropeptide peaks. The masses we found resulted in proposed muropeptide structures that are in accordance with the ones previously published by Glauner (3). The complete analysis is given in Tab. 2. We did obtain masses for the peaks between minutes 14 and 21, but they did not fit any muropeptide structures and are therefore not given.

This work was funded by the Deutsche Forschungsgemeinschaft (SFB766 to UB) and Baden-Württemberg Stiftung (P-BWS-Glyko / 21-Götz) to DDD. We thank F. Götz for helpful discussions and F. Götz and P. Schwartz for critical reading of the manuscript. 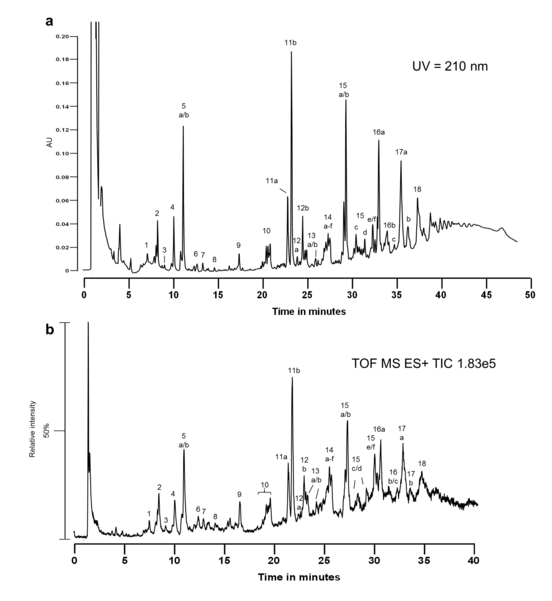 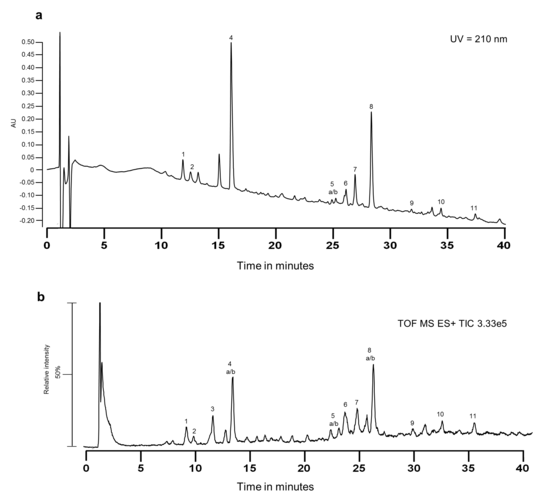 This table gives a summary of all muropeptides of S. aureus SA113 that could be detected by UPLC-MS. All structures were drawn by ChemDrawUltra (PerkinElmer) which automatically calculates the mass of the molecule and the sum formula. The latter is given. Each muropeptide contains one to six stem-peptides, each consisting of L-Ala – D-Glx – L-Lys – D-Ala (– D-Ala). In general, Glx is Gln. Non-amidated Glu is indicated separately. The length of each of the stem peptides is stated. The amount of Gly residues building the interpeptide bridges is given as the sum of all Gly residues present in each muropeptide. In rare cases one Gly is replaced by one Ala. Changes on the saccharide moiety (loss or addition of GlcNAc; O-Acetylation; rare non-reduced MurNAc) are shown. The muropeptides of the main peaks are highlighted in bold. The original references for these peaks are given. n.d. … not determined

This table summarizes the muropeptides of E. coli Nissle 1917 that could be detected by UPLC-MS. The sum formula to each mass is given. Each muropeptide contains one to three stem-peptides, each consisting of L-Ala – D-Glu – mDAP – D-Ala (– Gly). The length of each of the stem peptides is stated. In some cases Penta stem-peptides with Gly on position 5 are present. Loss of GlcNAc or acetyl is shown as -GlcNAc and -Acetyl. The muropeptides of the main peaks are highlighted in bold. The original references for these peaks are given.

Table 3: Solutions and buffers for peptidoglycan preparation and UPLC/MS analysis

This protocol results in enough material for one analysis per sample on UPLC. Always cover the samples properly with a foil to avoid evaporation or mixing of samples!