The vascular endothelium plays an essential role in regulating blood vessel tone, blood flow and blood pressure. Current vascular model systems for examination of endothelial cell biology and blood vessel physiology and pathology rely on cell culture and the generation of genetically modified animals. While these systems are advantageous for studying the endothelium, many cell culture models omit the contribution of other cells types present in the native blood vessel wall and the generation of genetically modified animals can be costly and time consuming. The following protocol outlines a novel ex vivo endothelial cell transfection for the knockdown of endogenously expressed endothelial cell proteins in intact isolated arteries. Briefly, arteries are isolated from the mouse and the lumen is perfused with siRNA and Nucleofector™ transfection reagent. The artery is then ligated at both ends and briefly electroporated to introduce the siRNA specifically into the endothelial cells, followed by perfusion of the lumen to flush excess siRNA. Transfected arteries are then cultured 18-24 hours for knockdown of targeted proteins. This system provides the utility of selectively knocking down a protein(s) of interest specifically from the vascular endothelium, providing the advantages of a genetically modified animal without the long time frame required for generation of tissue specific knockout animals. This protocol requires approximately 1 hour from isolation of the artery from the mouse to culturing of the transfected vessel.

In the late 1970s and early 1980s, Furchgott identified that endothelial cells that line the blood vessel lumen, synthesize nitric oxide which can signal to the overlying smooth muscle cells to induce relaxation (1-3). This seminal discovery put forward evidence that the endothelium does not simply just act as a conduit for blood flow and barrier from the extravascular milieu, but actively regulates vascular tone through distinct signaling pathways. In the decades that have followed a plethora of work has been done characterizing endothelial cell biology, identifying novel signaling mechanisms that regulate the contributions of endothelial cells to blood vessel tone and the signaling molecules that elicit these effects. Through these important discoveries, several model systems have been employed to investigate physiology and pathology of the vascular endothelium. In the simplest form, in vitro cell culture of a number of vascular endothelial cell lines has provided a useful medium for molecular and cell biology studies. However, while cell culture models have the added benefit of simple genetic manipulation, the contribution of other endogenous vascular cells to endothelial cell signaling is often lost. The advent of the vascular cell co-culture (VCCC) model has provided a leap forward in this respect by simulating the endogenous blood vessel wall (4). Importantly, the VCCC closely represents the structural makeup of the intact resistance artery wall with in vitro myoendothelial junctions (MEJ) readily forming between the two cell types that allow for heterocellular communication. This model allows for dissection of molecular signaling mechanisms involving proteins that may be localized to the MEJ. While much can be learned about endothelial cell signaling events in the VCCC, this model does not allow for evaluation of the role for the endothelium signaling in vascular reactivity. To this end, numerous global and cell type specific genetically modified animals have been generated providing a useful system for both in vivo and ex vivo experimentation. In particular vascular reactivity can be studied in great depth through isolated vessel cannulation. However, reliance on genetically modified animals can be associated with high costs and long generation times. In addition, genetic ablation of endogenous proteins can often lead to compensation by homologous proteins which can confound interpretation of results. While there are currently protocols for selective transfection of vascular smooth muscle cells in isolated arteries (5,6), there is a need for a model system in which the endothelium can be genetically modified in a more rapid time frame for vascular reactivity studies.

This protocol describes a novel approach for selectively transfecting endothelial cells in intact isolated resistance arteries for use in ex vivo vessel studies. Selective transfection of the endothelium in isolated arteries with siRNA can promote genetic knockdown of endogenous EC proteins in a short time frame. These arteries can then be used for vasoreactivity studies to investigate the contribution of targeted proteins to endothelial cell dependent signaling events. In brief, resistance arteries are isolated from the mouse and cannulated on glass micropipettes. Transfection reagents and siRNA can then be perfused specifically into the blood vessel lumen and arteries can then be electroporated to introduce the siRNA only into endothelial cells. These transfected arteries are then cultured for 18-24 hours to allow for knockdown of the targeted protein. Following protein knockdown, cultured arteries are cannulated and vascular reactivity in response to agonists can be assessed. This method cuts out the long time frame and high cost associated with generating knockout animals. Furthermore, endothelial cell transfection in isolated arteries eliminates the possibility for upregulation of homologous proteins in this cell type due to the rapid knockdown. Ex vivo endothelial cell transfection may therefore provide a useful model system for the study of endothelial cell physiology in relation to the intact blood vessel wall.

We have employed the ex vivo endothelial cell transfection in an investigation of the regulation of endothelial NO signaling by endogenously expressed hemoglobin alpha (Hb α) (7). In this study, selective transfection of endothelial cells in isolated resistance arteries with siRNA targeting Hb α resulted in a 70-80% knockdown of the protein as compared to control siRNA. Subsequent vasoreactivity studies on these arteries revealed a significant reduction in vessel contractility in response to the alpha 1 adrenergic receptor agonist phenylephrine and a significant hyperreactivity to the vasodilator acetylcholine. Importantly, endothelial cell transfection had no effect on the basal vessel tone. In addition, transfected arteries were utilized for NO diffusion assays and knockdown of Hb α in the endothelium resulted in increased NO diffusion through the arterial wall. Employment of the ex vivo endothelial cell transfection method served as a very useful tool for identifying the very first role for endogenously expressed endothelial cell Hb α in vascular physiology. This method may have wide reaching applications in the study of vascular physiology and pathology with respect to the endothelium.

For a detailed protocol on isolation of the TDA please see (8). A brief description of the dissection is outlined below:

Note: During this procedure all tissues are constantly humidified with cold Krebs-HEPES supplemented with 1% bovine serum albumin (BSA).

The total time for isolation and transfection of arteries in this protocol is approximately 1 hour per artery. The isolation of the TDA requires approximately 20 minutes and the cannulation and transfection protocol requires approximately 40 minutes. Culturing times for the transfected vessels can vary depending on the stability of the desired protein therefore, these times should be optimized for each target protein. Protocol timing can also vary depending on the total number of arteries to be transfected.

While this method provides robust knockdown of endothelial cell proteins in isolated arteries, the viability of transfected arteries can be low. To increase artery viability, it is essential to reduce the time that the transfection reagents are in contact with the vessel and optimize the culture conditions including incubation time and composition of media.

Successful ex vivo endothelial cell transfection with siRNA should result in the generation of viable arteries with significant knockdown of targeted proteins specifically in the endothelial cell monolayer. Knockdown efficiency can be assessed by confocal or en face fluorescence microscopy of transfected vessels. Transfected arteries can subsequently be used for a host of applications including vascular reactivity studies. It is essential to include relevant controls in experiments utilizing this method, including electroporated vessels that have not been exposed to siRNAs as well as non-targeting siRNA. 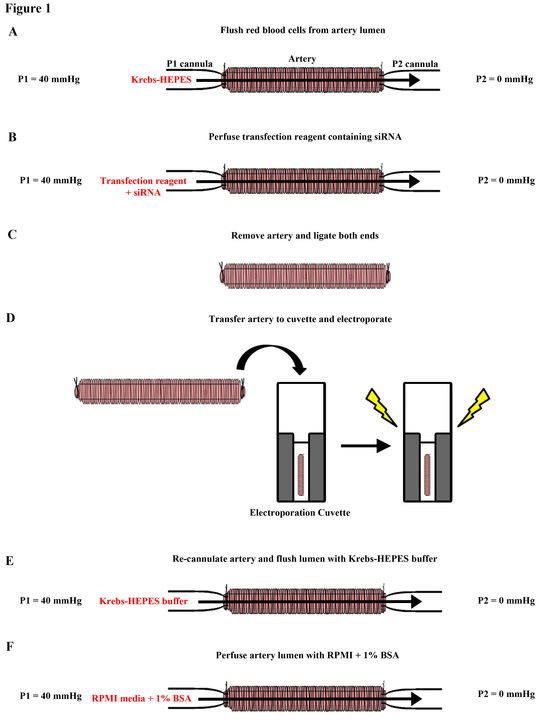 A. Isolated arteries are cannulated at both ends and red blood cells are flushed from the lumen. B. Nucleofector™ transfection reagent with siRNA is perfused into the arterial lumen. C. The artery is removed from the cannula and ligated at both ends. D. The artery containing siRNA and transfection reagent in the lumen is transferred to an electroporation cuvette and electroporated using program A-034 on the Nucleofector™ 2b device. E. The transfected artery is recannulated and siRNA and transfection reagent is flushed from the lumen. F. The arterial lumen is perfused with RPMI+1% BSA, transferred to a sterile cell culture dish containing RPMI+1% BSA and cultured for 18-24 hours in a 37°C cell culture incubator. 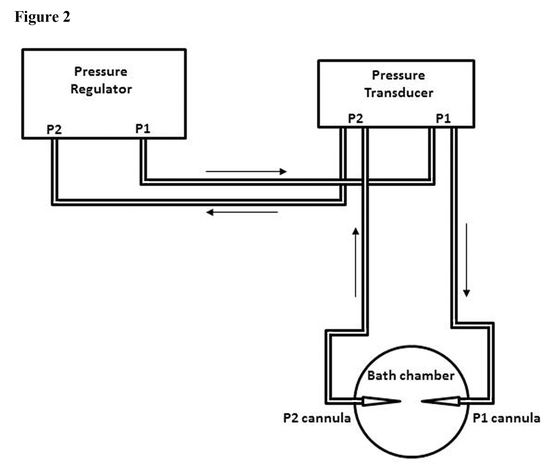 Schematic illustrating the pressure myograph set up for cannulation and endothelial cell transfection of ex vivo arteries. The arrows indicate the direction of flow.