Recent evidence suggests that experimental induction of hepatocytes into pancreatic cells provides new cell transplantation therapy prospects for type 1 diabetes mellitus. Stepwise differentiation from rat liver epithelial stem-like WB-F344 cells (WB cells) into functional insulin-secreting cells will identify key steps in beta-cell development and may yet prove useful for transplantation therapy for diabetic patients. An essential step in this protocol was the generation of pancreatic precursor cell that express Pdx1 based on induction by a combination of 5-aza-2’-deoxycytidine, trichostatin A, retinoic acid, and a mix of insulin, transferrin and selenite. The Pdx1-expressing cells express other pancreatic markers and contribute to endocrine cells in vitro and in vivo. This study indicates an efficient chemical protocol for differentiating WB cells into functional insulin-producing cells using small molecules, and represents a promising hepatocyte-based treatment for diabetes mellitus.

A progressive decrease in the pancreatic beta-cell mass is the main cause of diabetes and can be counterbalanced by providing new insulin-producing cells (IPCs). Promising islet cell transplantation methods as a means of reversing type 1 diabetes mellitus (DM) have been hampered by islet availability as well as by allograft rejection (1,2). Liver-to-endocrine pancreas transdifferentiation is an attractive strategy for generating beta-cell surrogates since the liver and pancreas share a common bipotential precursor cell within the embryonic endoderm (3,4). Most previously reported induction strategies required genetic manipulation, and induced cells were incomplete and non-selective for beta-cell phenotypes and function (5-7).

There have already been several reports on the generation of IPCs using small molecules from various sources of stem cells, such as embryonic stem cells and mesenchymal stem cells. However, to date, there has been no report demonstrating that pancreatic beta-cells can be induced from liver stem cells in this way. Therefore, by mimicking embryonic pancreatic development, we explored a stepwise protocol for the formation of IPCs from WB cells to control differentiation in vitro. In this study, efforts were focused on the key step of generating Pdx1-expressing cells as pancreatic progenitors. Several methods for inducing differentiation from stem cells into Pdx1-positive cells have been recently reported (2,14,17,18), but the combination and sequence of small molecules for induction and differentiation remain to be optimized.

We present here a three-step approach for generating functional IPCs from WB cells within only 17 days. A sequential treatment with 5-AZA, TSA, RA, and insulin, transferrin and selenite (ITS) induced efficient differentiation of WB cells into pancreatic precursor cells（WB-A cells）. More than 5% of the cells became Pdx1-expressing pancreatic progenitors in only 10 days, eventually becoming IPCs in a step requiring nicotinamide for 7 days in vitro or transplantation into diabetic nude rats for 60 days in vivo. These IPCs expressed characteristic pancreatic beta-cell marker genes, such as insulin I, insulin II, GK with no evidence of non-beta-gene expression. Moreover, insulin was released in response to glucose concentration and the induced IPCs in vivo could ameliorate hyperglycemia in diabetic rats. The identification of an attractive chemical strategy that induces hepatocyte-derived IPCs is an important approach for diabetes cell therapy in the near future.

Induction of WB cells into IPCs. In the first step :chromatin remodeling

Figure 1: Differentiation of WB cells into IPCs by a stepwise protocol and stage-specific cell morphology. 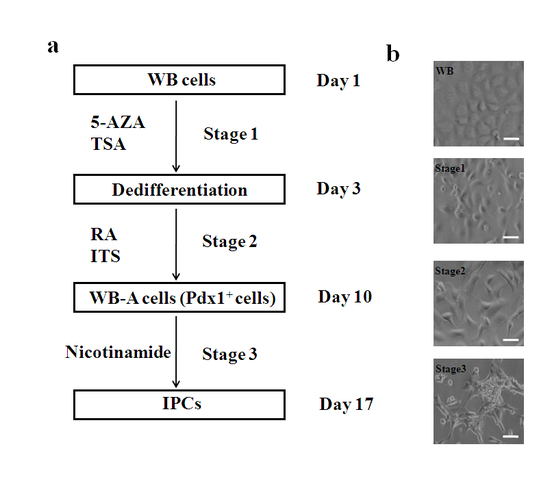 (a) Schematic representation of the three-step protocol to derive IPCs from WB cells. (b) Stage-specific cell morphology. Scale bar: 100μm. 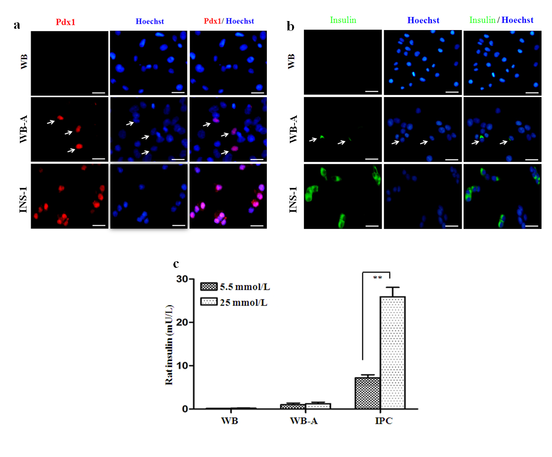 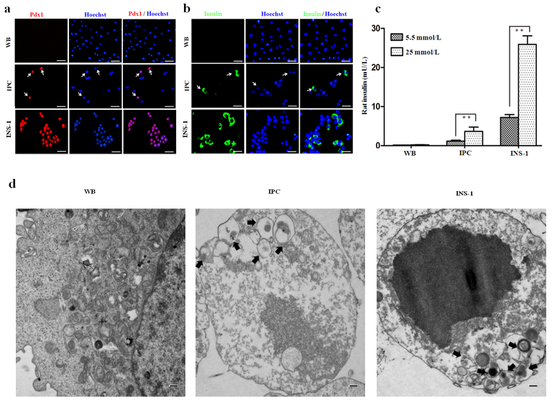 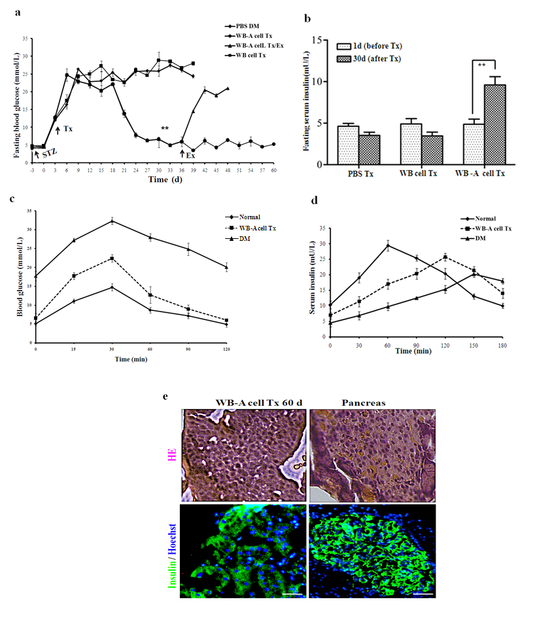