The root-colonizing fungal mutualist P. indica was discovered in association with woody shrubs in the Indian Thar desert in 1997. Since then, the fungus has been shown to confer beneficial association to a broad spectrum of host plants (1,2,3). Involvement of P. indica have been reported in high salt tolerance, disease resistance, growth-promoting activities leading to enhancement of host plant yield and in improvements of the nutritional status of the host plant (1,4,5). This fungus has been termed as plant probiotic (6). Until recently, the application of this fungus in agriculture biotechnology was hampered because of the non-availability of a suitable transformation system. For the first time in the present study to explore the beneficial features of this fungus, the EMT system has been developed using RNAi as a reporter. We propose that this system will be very helpful in genetic manipulation of P. indica to complement crop-growing strategies.

Electroporation of P. indica mycelia and spores and Selection of Transformed colonies. =>Timing 2 hours and 2 weeks (Selection of colonies)

Transformation of P. indica was performed using the recent technological advance of Electroporation-mediated transformation system developed for filamentous fungi (7). In the present study for transformation experiments pSD-1G was used (Fig. 1), this plasmid has a RNAi construct for Phosphate transporter gene (PiPT) of P. indica (5). The protocol we have described here routinely generates 20-50 Geneticine resistant colonies per µg of input plasmid DNA. Transformed mycelial tissue was easily observed and scored after secondary selection as shown in Fig. 2 a, and later confirmed with PCR (Fig. 2 b). We have used this system successfully in transforming plasmid containing RNAi construct of PiPT gene of P. indica and this has resulted in the first reported RNAi in P. indica (5). We expect that this protocol can be readily adopted to manipulate P. indica genetically which was a limiting factor so far.

We are very thankful to Dr. Hitoshi Nakayashiki, Kobe University, Japan and Fungal Genetics Stock Center, University of Missouri, Kansas, USA for providing pSD-1G vector. This project was financed by Council of Scientific and Industrial Research, Department of Science and Technology, Govt. of India. MK, HK are very thankful to ICMR, CSIR and JNU for providing research fellowship. 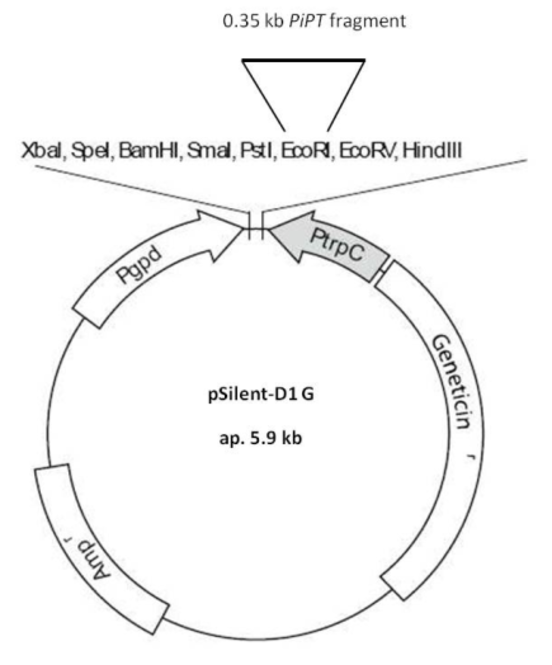 A 350 bp unique fragment of PiPT gene was cloned into this vector at Eco RI site for silencing PiPT gene. 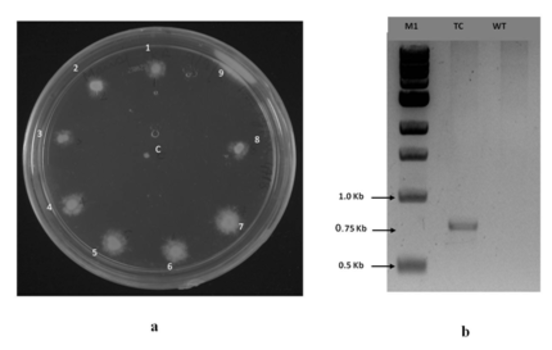 a. Secondary selection of Transformed P. indica colonies. Electroporated mycelia of P. indica were subjected to primary selection on KF media added with 1000 µg /ml G418 at high concentration of phosphate (10 mM). Several colonies were appear and were again subjected to secondary selection with 1000 µg/ml G418 at low level of carbon source (10 mM glucose) and high concentration of phosphate (10 mM). Out of 9 colonies, 1-8 were regenerated while 9th colony was disappeared. In this selection non transformed P. indica colony (C) was used as a negative control.

b. PCR analysis for the confirmation of Transformation. A PCR was performed with the specific primers of GDP Promoter and insert, a specific 750 bp amplified fragment was observed in case of Transformed colony (TC) showing integration of plasmid vector into the genome of the P. indica. Wild type P. indica (WT) was used as a negative control. M1, 1 Kb DNA marker.