Hemoglobin is auto-oxidized from ferrous-hemoglobin to ferric hemoglobin (methemoglobin, metHb) with the production of H2O2. H2O2 initiates the catalytic cycle between the ferric (HbFeIII) and ferryl (HbFeIV) hemes, thus activating the pseudoperoxidase activity of metHb, which eliminates the H2O2, producing the superoxide (1). The chemiluminescence (CL) of Cypridina luciferin analog indicates the generation of O2•- or singlet oxygen, but not that of ozone, hydroxyl radicals or H2O22. To further confirm that the ROS species produced by metHb and indicated by CLA-CL is superoxide anions but not singlet oxygen, superoxide dismutase (SOD) is applied as a diagnostic confirmation of superoxide anion production

The pseudoperoxidase activity is measured as described 2, with modifications.

The read out of CLA-LA varies from 10e5-10e7 rlu/s depending on the concentration of the metHb and the H2O2 as the substrate as well as that of CLA as the indicator.

Figure 1: The pseudoperoxidase activity of methemoglobin (metHb) was demonstrated by CLA-CL. 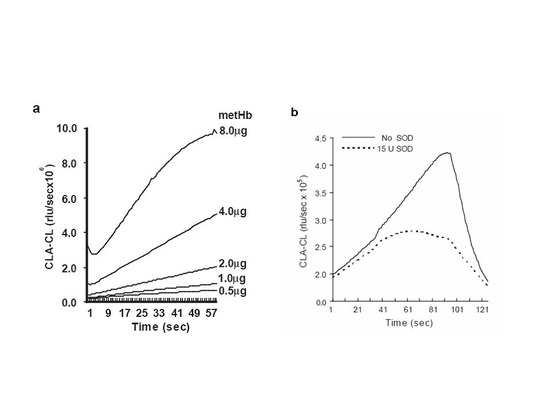 (a) metHb catalyzes the production of O2•-, as shown by the chemiluminescence (CL) assay. (b) SOD significantly reduces metHb-mediated CLA-luminescence, thereby confirming the superoxide anion.