Combining BRET and FRET in the Sequential BRET-FRET (SRET) new technique permits heteromers formed by three different proteins to be identified. In SRET experiments, the oxidation of a Rluc substrate triggers acceptor excitation by BRET and subsequent energy transfer to a FRET acceptor. Thus, SRET requires the co-expression of three fusion proteins, one coupled to Rluc, another conjugated with GFP2 or YFP, and the third with YFP or DsRed. SRET is an invaluable technique to identify heteromeric complexes of more than two neurotransmitter receptors, which will enable us to better understand how signals are integrated at the molecular level.

This study was supported by Grants from the Spanish Ministry of Education and Science (SAF2005-00170 and SAF2006-05481), Grant 060110 from the Fundació La Marató de TV3 and from Intramural Funds of the National Institute on Drug Abuse” 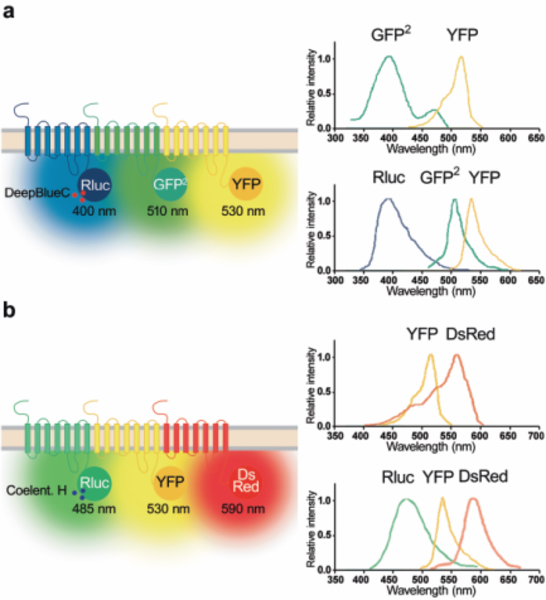 Scheme of SRET2 (a) and SRET1 (b). SRET combines BRET (BRET2 or BRET1) and FRET involving two energy donors and two acceptors. BRET and FRET techniques are combined to detect heterotrimers at the membrane level (left in a and b). BRET2 (a) or BRET1 (b) signal is initiated by, respectively, oxidation of DeepBlueC (a) or coelenterazine h (b) by the Rluc-fused protein that generates a light emission at the indicated wavelength (blue in a, green in b). The acceptor in BRET is a GFP2-fused protein (a) or a YFP-fused protein (b) that after excitation results in an emission at the indicated wavelength (green in a and yellow in b) that excites either a YFP-fused protein (a) or a DsRed fused protein (b) by a FRET process with concomitant light emission peaking at the indicated wavelength (yellow in a and red in b). Emission of YFP (a) or DsRed (b) after addition of the Rluc substrate is only possible if the three fusion proteins are in close proximity (<10 nm) allowing bioluminescent and fluorescent sequential resonance energy transfer (SRET) to occur. Excitation (top) and emission (bottom) spectra of fused proteins are depicted in the images in the right.

Click here for a larger version of this figure.