In situ imaging of nitric oxide (NO) in cells can be performed using 4-amino-5-methylamino-2’,7’-difluororescein diacetate (DAF-FM) (1). The ability to visualise NO production upon activation of endogenous NOS isoforms in a culture system is becoming increasingly important for studying NO signalling. We have detected NO accumulation in embryonic cortical neurons upon activation of endogenous nNOS following stimulation with the neurotrophin brain-derived neurotrophin factor (BDNF) (2). Importantly, we were able to detect NO accumulation within both the cytoplasm and the nucleus. This was achieved through culturing cortical neurons in low serum and the use of a DAF-FM-DA probe in combination with a CellTracker Red CMTPX probe.

Unless specified, reagents were obtained from Sigma, UK.

The protocol presented here allows the visualisation of nitric oxide accumulation in the nucleus. The use of CellTracker CMTPX allows the visualisation of neuronal morphology without employing laborious immunostaining technique. This is of particular importance due to the instability of the fluorescent benotrialzole produced upon reaction of NO with DAF-FM. CellTracker Red CMTPX has the additional advantage of being nuclear impermeable. This is critical to allow confident imaging of NO accumulation within the nucleus.

The protocol permits detection of neurotrophin-dependent activation of endogenous nNOS. E17 cortical neurons kept in media containing serum for 4 days in vitro will already express glutamatergic receptors. Experimental procedures, such as loading the cells with probe followed by repeated washes may lead to stimulation of neurons and subsequent excessive Ca2+ signalling and nNOS activation. Therefore, starving cortical cultures in media containing DL-APV for 16 hours is critical to reduce background levels of NO production. 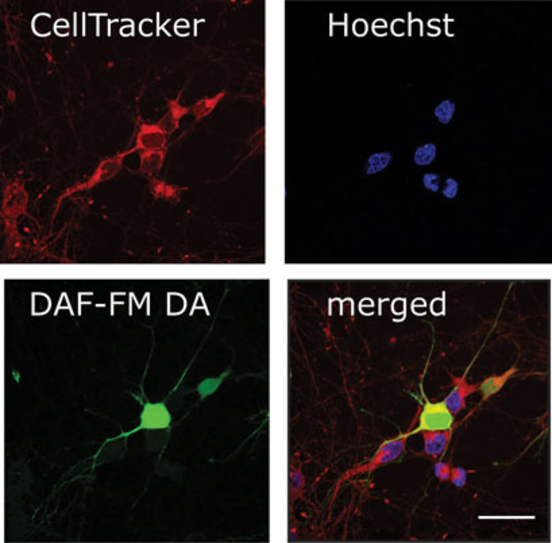 Cortical neurons were loaded with 10µM DAF-FM for 30 minutes prior to treatment with BDNF (100ng/ml for 10 minutes). Cells were stained with CellTracker red and Hoescht to allow visualisation of cell morphology and nuclei respectively. Nitric oxide is detected upon reaction with DAF-FM at an emission/excitation maxima of 495/515nm. Images were captured using a Leica DM2500 confocal microscope. Scale bar is 25µM.