Detailed protocols for crystallizing cryptophane-guest complexes are provided. Cryptophane molecular cages (cryptophane-A, also tripropargyl and triallyl derivatives) were crystallized with water, xenon, methanol, or without guest via the vapor diffusion method and with chloroform via slow evaporation. The average time required to grow cryptophane crystals is 1 week.

A fascinating area of research involves the designed encapsulation of charged or neutral guests within molecular hosts. This leads to applications such as storage devices, (1-2) reaction vessels, (3-5) biosensors, (6-7) new materials and molecular building blocks, (8) logic gates, (9) and electronic components.(10) A prototypal molecular host, cryptophane-A (with internal volume of the “open” crown-crown conformation ranging from roughly 80 to 100 Å3), binds many different small molecule guests. (11) Cryptophane-A exhibits unusually high affinity towards xenon and can be functionalized with peptide or small-molecule targeting moieties to generate biosensors that exploit the high sensitivity and large NMR chemical shift window of hyperpolarized Xe-129. (6,11) The high-resolution crystal structures of cryptophane-A and its derivatives with various guests inform our understanding of molecular recognition processes in cryptophane molecular host systems. The analysis of these structures provides useful comparisons for studying host-guest interactions in other synthetic as well as natural supramolecular assemblies.

Single crystals of many cryptophane-guest complexes can be grown in the neat guest solvent. In these cases, the guest is a liquid at rt and, of course, the solvent molecules must be sufficiently small to be encapsulated by the cryptophane host cavity.

The growth of diffraction-quality crystals with an encapsulated gaseous xenon atom presents additional challenges. While the solubility of xenon in organic solvents is generally high (~100 mM), it is however necessary to use a solvent that is too large to occupy the cavity of the cryptophane, such that it does not compete with xenon. One consideration is that such solvents are typically unable to dissolve cryptophane at the millimolar concentration needed for crystallization. In this study, fluorobenzene was selected as the solvent for growing most of the cryptophane-xenon crystals as it is too large to occupy the cavity of cryptophane-A and still adequately solubilizes cryptophanes to allow for the growth of single crystals by the vapor diffusion technique. In one case mesitylene was used, but the low solubility of cryptophane in this solvent resulted in only a single successful single-crystal growth.

Cryptophane-A and derivatives (Fig. 1) were crystallized with or without various guests using vapor diffusion or slow evaporation techniques.

This method works very well for milligram quantities of cryptophane material. A solution of the cryptophane (~1 mM) is prepared using solvent S1 and placed in an open vial V1. A second solvent, S2 (precipitating solvent), is placed in a larger vial V2. S2 is chosen such that when mixed with S1 the cryptophane will become less soluble. The vial V1 containing S1 is then placed in vial V2, which is immediately sealed. Slow diffusion of S2 into V1 and S1 out of V1 will cause crystals to form. If S2 is more volatile than S1 the solvent level will increase inside V1 and prevent microcrystalline crusts from forming on the sides of V1. Most of the studied complexes were crystallized using the vapor diffusion method.

This method works best for compounds that are insensitive to ambient conditions in the laboratory, as the vessel must be at least partially open to the surrounding environment to allow evaporation. A nearly saturated solution of the cryptophane (approximately 1 mM) is prepared in a suitable solvent. The solution is transferred to a clean crystal growing dish and covered loosely with a lid, such that solvent can slowly evaporate. The container should be placed in a quiet, out of the way place and left at rt for the solvent to evaporate. In the present study, only the cryptophane-CDCl3 complex was crystallized by slow evaporation (of CDCl3 solvent).

In all cases, a 1 mM cryptophane solution in the specified solvent was used.

Tripropargyl cryptophane CC- 1 (no guest): Tripropargyl cryptophane 1 was crystallized without guest in the crown-crown conformation. Crystals of 1 were grown from fluorobenzene using hexanes as precipitating solvent for vapor diffusion crystal growth. A small amount of electron density was observed within the cavity, suggesting that trace water or other solvent molecule may have gained access to the cavity. Crystallization of the completely empty cryptophane in crown-crown conformation may require rigorously dry solvents. 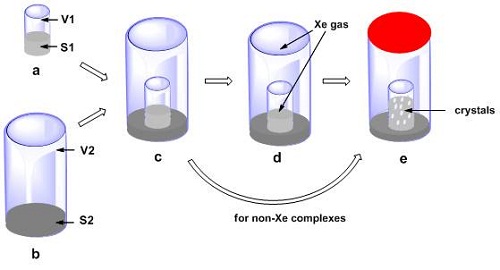 Note: For efficient crystal growth, cryptophane solutions (~1 mM, 6 mL total) were prepared for multiple crystallization trials. Aliquots (2 mL) were put into three different vials, V1. Each V1 with the cryptophane solution was placed into separate V2 vessels containing hexanes, diethyl ether, or n -pentane. For crystallization of cryptophane-A derivatives and their complexes, typically good crystals were obtained with only one of these three precipitating solvents, in an unpredictable fashion.