C. elegans shows odour adaptation after continuous exposure to an odorant for more than 30 minutes (1). We recently found that odour adaptation is also observed after a short pre-exposure (5 min) to odorants (2). This new type of adaptation requires several interneurons including AIY and RIF, indicating that this behavioural plasticity depends on neural circuits.

The protocol for the short pre-exposure adaptation was modified from the conventional adaptation assay (1). It is important that the plate format used in this protocol (Fig 1a) is different from that used in the conventional adaptation assays (Fig 1b). In our format, spots of odorants, worms and control spots are aligned in close proximity. Therefore, our format is more sensitive to odour-avoidance behaviour after odorant pre-exposure.

We thank K. Yamada for useful advice and discussion. 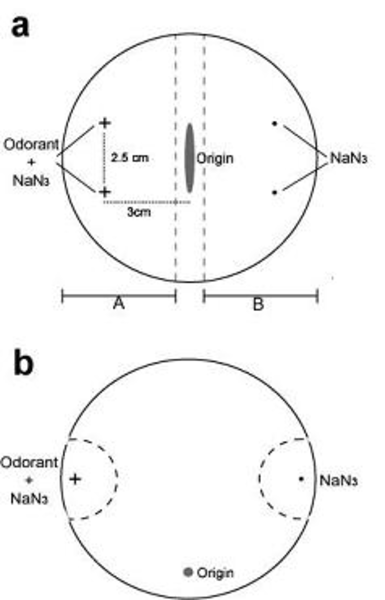