The activity of the enzyme 7-ethoxy-resorufin-O-deethylase (EROD) has been extensively employed in biomonitoring studies of persistent organic pollutants (POPs) for more than a decade. Although the procedure is simple, convenient, sensitive and accurate. The cytochrome P450 monooxygenase 1A (CYP1A) is induced by several planar toxic compounds and endogenous chemicals, and the induction of this protein is often measured in terms of EROD activity. This protocol describes how to use EROD activity in the prediction of toxicity of chemicals in several models. The method can be employed in vitro and in vivo to assess the effects of drugs and toxic compounds on CYP1A1 enzyme. In aquatic biota EROD activity is a sensitive biomarker of exposure to certain planar halogenated hydrocarbons and the other structurally similar compounds. This method is rapid and the whole procedure takes no longer than 30 min including reagent preparation.

Up to now, 57 human genes coding for the various cytochrome P450 (CYP) enzymes have been characterized1. Binding of polycyclic aromatic hydrocarbons (PAHs) and the other persistent organic pollutants (POPs) to the aryl hydrocarbon receptor (AHR), a ligand dependent transcription factor, results in an induction of cytochrome P450 1A and their associated 7-ethoxy-resorufin-O-deethylase (EROD) activity 2. CYP1A genes are activated by AHR agonists via high affinity competitive binding to the receptor3. CYP1A enzymes are the most highly up-regulated and therefore often used as a marker to indicate AHR activation3. The CYP enzymes show cell-type-and tissue-specific expression patterns in human and animal tissues and seven members of the CYP1 enzyme family (e.g., CYP1A1, 1A2, 1B1) are primarily involved in the metabolism of xenobiotics 4-8and several endogenous chemicals1,4.

CYP1A is expressed predominantly in the liver, but it can be been found in the other organs such as kidney, skin, lung, adrenal, gonads and brain 9-11. The use of CYP1A induction as an assessment technique has increased in recent years. This is due mainly to the optimization of protocols for the rapid and relatively inexpensive measurement of its catalytic activity so-called EROD 12-14. As for most enzyme assays, the EROD activity can be normalized to the total protein values, the determination of which has clear limitations in high-throughput assays. The catalytic activity towards 7-ethoxyresorufin is measured as the concentration of resorufin produced per mg protein (pmol/min/mg protein) 15,16. In addition to the protein value, EROD activity can be normalized to the metabolic activity of the cells that can be measured by MTT, reszrusin and almar blue assays and expressed as metabolic cell equivalents based on the obtained data rather than to protein values17. It seems that the results of EROD activity normalized by protein value to some extent are comprable with the data normalized with cell viability (Figure 1).

At present, the measurement of EROD activities in the primary and immortalized cell lines remains the preferred bioassay tool in many laboratories, because of the reproducible simultaneous determination of protein and resorufin concentrations. The EROD can be fluorimetrically detected in prepared microsomes from human and animal tissues 18-20. Indeed, fish gill EROD assay is a sensitive biomarker of exposure to POPs 21.

EROD activity describes the rate of the CYP1A mediated deethylation of the substrate 7-ethoxyresorufin to form the product resorufin (Figure 2).

Over two decades have passed since the induction of the CYP1A was proposed as a biomarker of exposure to PHHs and PAHs 22. Measurement of EROD activity in fish is a well-established in vivo biomarker of exposure to certain planar halogenated hydrocarbons (PHHs), PAHs and the other structurally similar compounds23. To study the fate of pharmaceutical residues, EROD assay is a rapid, accurate and cost effective method.

Supplement DMEM with 1 mM sodium pyruvate, 4 mM L-glutamine, 10% (vol/vol) FBS, 100 U ml − 1 penicillin and 100 μg ml − 1 streptomycin. CRITICAL It is important to keep media, buffers and solutions sterile. For all other solutions it is recommended that they be sterilized at least once prior to use. CRITICAL Pre-warm buffers and media at 37 °C before bringing them into contact with growing cell cultures. Please store commercial cell culture media at 4 °C. Media supplements should be added prior to use.

b) Measurement of EROD activity in animal tissues

E) Measurement of EROD activity in zebrafish larvae and embryos 28,29

Ensure that the EROD activity of the samples fall within the range of the standard curve; if not, adjust the standard. 7-Ethoxyresorufin ≥ 2.5 µM can inhibit some activity of CYP1A1, it might work with optimal concentrations of 7-Ethoxyresorufin which is ≤ 2.5 µM. The CYP1A1 enzyme show cell-type-and tissue-specific expression patterns, to find out the optimum EROD activity, it is recommended to run a dose-response and a time course study (Figure 3). Sometimes the fluorescence of samples is lower than the background. In this case, it is better to do well kinetic rather than endpoint measurement. 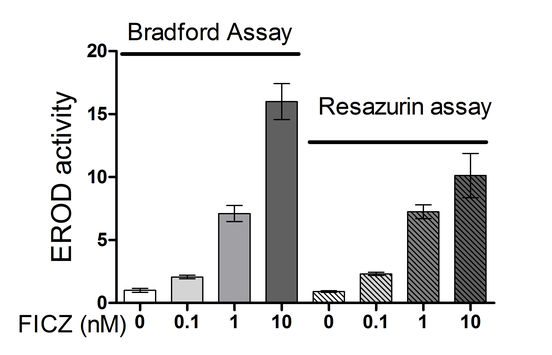 CYP1A1 enzyme activity in HaCaT cells treated with FICZ, an endogenous ligand of AHR, in DMEM medium. Cells were treated for 3 hours with vehicle (DMSO) or 0.1, 1 or 10 µM of FICZ. Treatments were terminated at the indicated time point and EROD activity was measured. Data are expressed as means ± SD. 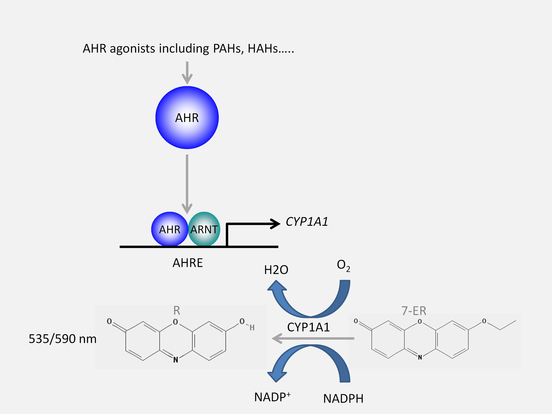 Schematic illustration of AHR activation by the POPs and conversion of 7-Ethoxyresorufin to resrufin by CYP1A1 enzyme.