Carotenoids are compounds synthesized in plants, bacteria and fungi, closely associated to the chlorophyll to perform photosynthesis. A spectacular evolutionary achievement allowed the aphid to produce carotenoids obviously by lateral transfer of genes from fungi. We have recently documented that these molecules are involved in photo conditioning of metabolism such ATP synthesis in this insect model. The carotenoid synthesis in aphid was directly determined in living insects without extraction procedure by Raman imaging technique and the analysis was compared between insects raised in distinct environments. In contrast with the Raman spectrum that provides information on molecular motifs recognition (conjugated double bonds) but does not discriminate between isomers and ester forms, the mass spectrometry technology allowed us to analyze finely the variations in carotenoid composition. In parallel to these spectral analysis and chemistry determination, series of dosage of ATP were performed in order to correlate carotenoid synthesis and metabolism in aphid.

Carotenoids are constituted of five joined isoprenoid units. These highly unsaturated and lipophilic molecules are very unstable, due to their susceptibility to isomerize and/or to oxidize rapidly during the analytical procedures. Thus, precautionary measures to avoid formation of artifacts and quantitative losses should be standard practice in the laboratory. Therefore, the major focus should be to complete the analysis within the shortest timing, to avoid reaction with oxygen and acids, to protect samples from light and high temperature. The use of high purity solvents that are free from harmful impurities is a strong recommendation (Rodriguez-Amaya, 2001).

Oxygen, especially in combination with light and heat, is highly destructive for carotenoid molecules. Exposure to sunlight and/or ultraviolet light induces trans/cis photoisomerization and photo-cleavage of carotenoids. Thus, the experimental work must be done under red light and/or in dark.

The frequent errors and drawbacks commonly associated with the extraction, identification and quantification of carotenoids are carefully pinpointed in the Procedures in the next section. To allow the reliability of the results, each analysis was performed in triplicate. More precisely, the following points should be considered:

In parallel with this analytical procedure aimed to identify the repertoire of the carotenoid family, a direct molecular imaging is performed using the Raman imaging spectrometry and living animals without previous extraction. Although this does not allow us to identify specifically each isomer of the carotenoid repertoire, a global quantification can be done based on common molecular motifs generating specific Raman profiles. This procedure is non-destructive and allows researchers to visualize the molecules of interest in their cellular and/or organ context.

All solvents were of HPLC grade, purchased from Carlo Erba (Val de Reuil, France) or Sigma-Aldrich (Steinheim, Germany). ATP dosage was performed with the kit FLASC purchased from Sigma Aldrich, based on quantification of emitted visible light proportional to the concentration of ATP in the reaction medium. List of molecules and organic solvents used for the mass spectrometry analysis (LC-MS):

For Raman imaging analysis, the equipment was a spectrophotometer Labram HR800 Horiba Jobin-Yvon. An ion laser beam was focused on the immobilized aphids (legs were cut or alternatively fixed with glue) on a glass slide by using a 100x objective (NA 0.9) and/or a 50x LWD objective (NA=0.45) depending on the depth of the analysis of the biological sample. Raman back scattered light is collected by the same objectives. Then, we estimated the analyzed area to about 1 μm square with a 100x objective and about 10 μm square with a 50x objective.

The β-carotene standard amount (Extrasynthese, cat n° 0303 S) is very low (~ 1 mg). To overcome these limitations, the concentration of the initial solution was determined by measuring its specific absorbance in hexane solution at 451 nm and using the extinction coefficient of β-carotene (ε1%) in hexane (= 2592). The successive dilutions of the initial solution were then prepared in hexane and injected into HPLC. The β-carotene chromatographic profiles were used to standardize the concentrations. The initial β-carotene solution was kept in amber vial under nitrogen atmosphere at -80°C for a maximum of one week.

The procedure was adapted from the article published by Taungbodhitham et al. (1998), Dhuique-Mayer et al. (2005) and Mertz et al. (2010). Each analysis was made in triplicate.

The major points of carotenoid analysis are the sampling and sample preparation, extraction, partition/solubilization in appropriate solvents depending on their polar/apolar properties, washing, evaporation of solvents, chromatographic separation, and finally at the end of this process, identification and quantification of the carotenoid compounds.

2nd Step: extraction and purification steps. This entire step was conducted under red light until transfer in an amber vial. Figure 1 presents the main steps of this procedure.

Raman spectrometry provides a fingerprint of molecules specific of its global structure and/or some of its motifs (Roman et al. (2010). The intensity of the peaks is proportional to the quantity of molecules which generate them and can be determined in cell context without destructive extraction process. Raman imaging spectrometry can be also used for a spatial visualization of molecules in tissue allowing the analysis of molecular dynamics. Briefly, υ(C=C) 1500 – 1900 cm-1 and υ(C≅C) 2100 – 2250 cm-1 and υ(C−Η) 2800 – 3000 cm-1 give strong Raman signal. Three peaks specify carotenoid molecules in Raman analysis: C-CH3 (1000 cm-1), C-C (1150 cm-1), C=C(1500 cm-1). Different ratios were determined: the ratio C-C/C=C; C=C (torulene/carotene); C-C / C=C; C-CH3 / ½ (C-C + C=C; ); C-CH3/C-C and C-CH3/C=C. Considering that the Raman peaks result from inelastic scattering involving vibrational levels of molecules, the baseline is related to radiative relaxation processes giving rise to fluorescence. The latter phenomenon strongly depends on the excitation wavelength and the interaction of molecules with its environment (Figure 3).

3) ATP dosage of individual aphid extract in a complex population.

The dosage was conducted according to the recommendation of the company and is based on the visible light production obtained with an equal amount of protein in tested samples (Figure 4).

The pea aphid Acyrthosiphon pisum (Homoptera order, Aphididae family) are raised on the Vicia faba plant. Aphids were maintained in cages in a Sayo incubator at about 22˚C ± 3˚C and/or at 8°C ± 1°C, humidity 60% and with a photoperiodicity of 16/8 hours light/dark. Three colored phenotypes are the orange, the white and the green. Basically the white phenotype emerged when the plants are declining and food resources are rare. The orange phenotype is dominant in optimal temperature and food resources. Finally the green phenotype was selected over 5 months by placing 10 orange adults each day at 8°C ± 1°C. The orange phenotype was not viable in these conditions (orange larvae died at the stage 3 or 4), but the selected green variant turned out to be robust at this temperature. Placing back the green variant at room temperature results in the fast fading of the green pigment in each individual and its disappearance in approximately two days (aphids become orange again). 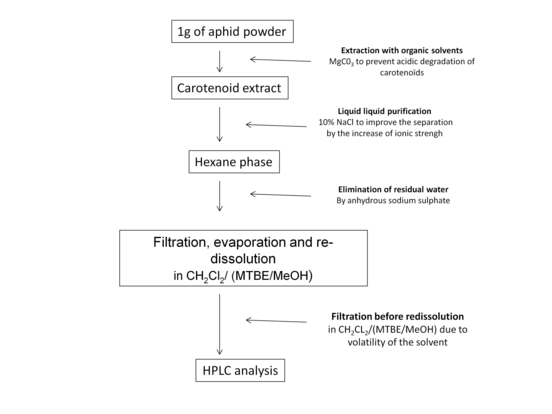 The scheme represents the rationale of the procedure detailed in the text in order to identify molecular components of the carotenoid family extracted from aphids.

Figure 2: Microscopic photographs of aphids realized with the Raman equipment. 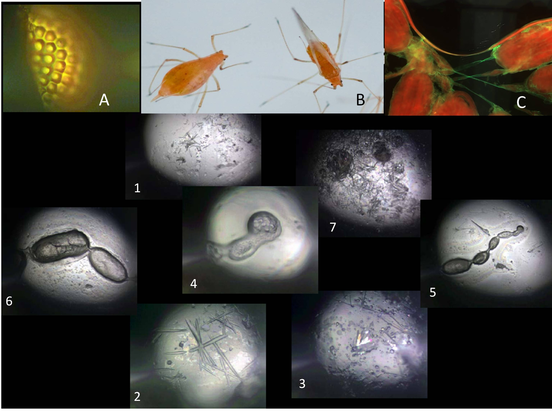 A, B and C represent an adult eye of aphid, an aptere and winged adult orange aphid, and embryos after dissection of the abdomen of a parthenogenetic mother, respectively. 1, 2 and 3 represent the microscopic photographs realized with the Raman equipment (Horiba scientific) that were obtained with an extract of a crashed adult aphid (we see lipidic droplets and crystals). The laser beam of the Ramam spectrometer is focused on each droplet and/or crystals. 4, 5 and 6 represent a germarium, an ovariole and detailed embryos on which the laser beam is focused, respectively. 7 represents the eyes of an embryo. These photographs, except for B and C, were realized with the microscope of Raman spectrometer to guide the laser beam.

Figure 3: Raman spectrum of a crystal of carotenoid compounds. 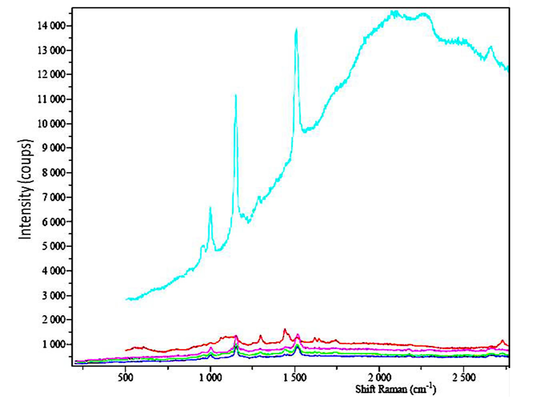 The green spectrum was obtained with the laser beam focused on a crystal (spectrum obtained with the excitation in the absorption band of carotene – 488 nm). The other spectra were obtained with other parts of the aphid extract (droplets, germarium, young embryos, etc…).

Figure 4: Heterogeneity in a population of aphids and correlation with ATP amounts. 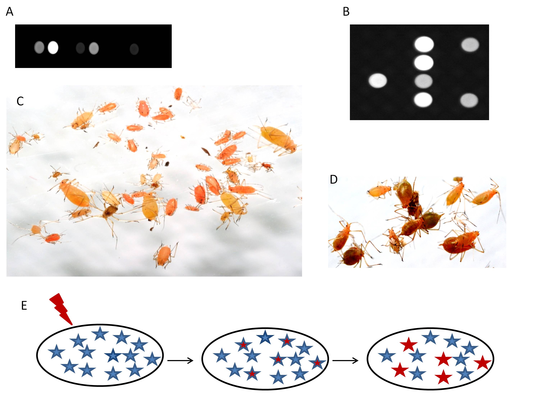 A and B represent a random analysis of distinct individuals represented in C and D, respectively. This protocol highlights the heterogeneity in a population of aphids obtained on the same plant and in the same conditions. ATP amounts correlate with the intensity of the orange color. The scheme in E summarizes the interaction between the environmental stress (red arrow) and the emergence of an induced phenotype two generations later (red stars). Clonal aphids propagate in telescopic generations with the first and second generations of embryos in the same mother like russian dolls The carotenoid content in individual aphids depends on this genetic scenario. 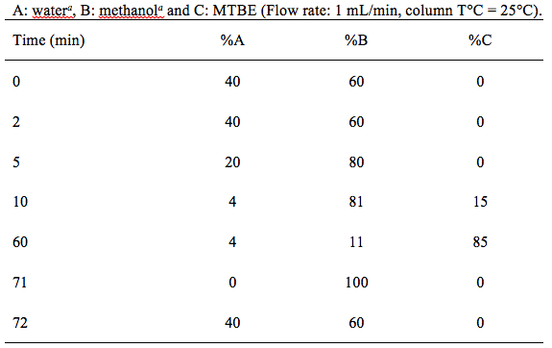 HPLC analysis of carotenoid molecules. (a) For HPLC-MS analysis, ammonium acetate at 20 mM is added to the solvent. 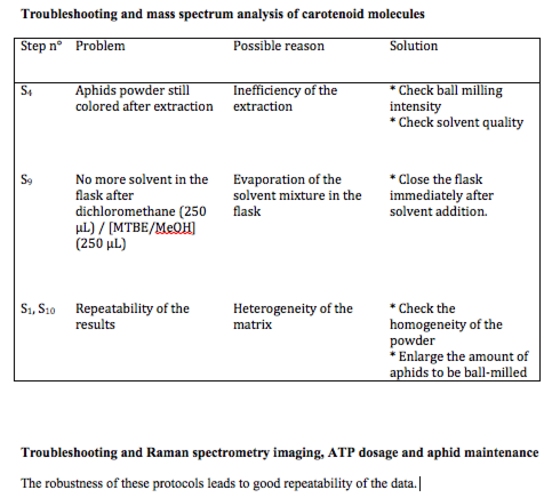