A number of different cytokine combinations have been tested for their ability to support the proliferation and differentiation of human CD34+ hematopoietic stem cells (HSC) into mature NK cells. Here, we describe an improved protocol based on multiple cytokines (SCF, Flt3-L, IL-15 and IGF-1) culture for obtaining a high number of lytic NK cells from human umbilical cord blood CD34+ cells.More than 6×107 highly lytic NK cells can be obtained from 1×105 fresh CD34+ HSC using this protocol. This facilitates the use of the above culture system as a tool for researchers to study the development, properties and functions of NK cells in vitro, and this procedure also facilitates cellular adoptive immunotherapy by providing sufficient numbers of highly enriched CD3- CD56+ effector cells with highly cytotoxic potential.

NK cells are important effectors of the innate immune system, and the cytotoxic function of NK cells is crucial to many processes such as defending against pathogens and tumors (1, 2). In vitro, human NK cells can differentiate from bone marrow- or cord blood-derived hematopoietic progenitor cells in appropriate culture conditions. In early studies, NK-cell development from purified HSC was shown to be stromal-cell dependent (3). It has later been demonstrated that the stromal-cell requirements may be replaced by the provision of combined cytokines such as SCF, Flt3-L and IL-15 to the cultures (4). In particular, SCF and Flt3-L directly induce the expression of IL-2 receptor-βchain on HSC, thereby rendering them susceptible to the NK-cell commitment induced by IL-15 (5). Recently, a number of different cytokine combinations have been tested for their ability to support the proliferation and differentiation of human CD34+ hematopoietic stem cells (HSCs) into mature NK cells. However, a cytokine that has not been extensively studied in this regard is insulin-like growth factor (IGF)-1. IGF-1, also known as somatomedin C, is one of the main endocrine mediators of growth and development under physiological conditions (6). In addition to this important function, IGF-1 also regulates the hematopoiesis and direct effector functions of diverse aspects of cells of the innate and acquired immune systems. In this study, we found that IGF-1 may foster the IL-15-induced NK differentiation of human umbilical cord blood (UCB) CD34+ cells.

Following this protocol, purified CD34+ HSCs from human umbilical cord blood (UCB) were maintained with Flt3-L and SCF, IL-15 and IGF-1 for up to 4 weeks. To monitor cell expansion in response to cytokine stimulation, cells were counted weekly. Our data showed that proliferation was increased substantially in CD34+ cell cultures containing SCF, Flt3-L, IL-15 and IGF-1 (Fig. 1). Moreover, a significant increase was observed in the percentages and absolute cell numbers of CD3- CD56+ NK cells when cells were cultured in the above multiple cytokines with IGF-1 (Fig. 2).

NK cell function was evaluated through flow cytometry monitoring of perforin and CD107a expression. We found that SCF, Flt3-L and IL-15 with IGF-1 significantly increased perforin expression and CD107a release in human CD34+-derived CD56+ NK cells compared with that of CD56+ effectors derived from the same CD34+ population in the presence of SCF, Flt3-L and IL-15 alone (Fig.3).

Figure 2: The generation of NK cells cultured with combined cytokines

Figure 3: Analysis of the cytotoxic potential of cytokine-differentiated NK cells 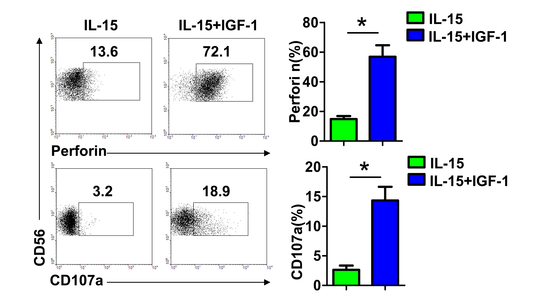 Flow cytometry for perforin and CD107a expression in human UCB/CD34+-derived NK cells cultured for 28 days. Data are representative of three independent experiments. The graphs show the average relative frequency of perforin+ and CD107a+ NK cells as above. *P < 0.05 (Student’s t-test).