An easy and fast way to obtain a high number of glial cells from rat cerebral tissue: A beginners approach.

Primary glial cell cultures are the most commonly used in vitro model for neurobiological studies. However, the lack of an easy and fast protocol for the isolation and culture of these cells leads to long incubating times with the use of high number of rat brains. Here, we describe a quick protocol based on mixed glial culture for the highly-enriched isolation of microglia, astrocyte and oligodendrocyte cells. The procedure is suitable for beginners as it makes available the easier way to obtain the nervous tissue, the evolution of the mixed culture throughout the time, and the final results after the isolation of each cell type. More than 20×10e6 cells per rat brain can be obtained using this protocol, with no more than 11 days of incubation. This facilitates the use of the primary culture as a tool for researchers to study the development, properties and functions of glial cells in vitro.

Glial cells are a highly specialized population of the Central Nervous System (CNS) that maintain homeostasis, permit the transmission of the electrical impulse or act as supportive and active cells for neuronal networks. In mammalian, glia is refered to microglial, oligodendroglial and astroglial cells. Microglial cells are derived from myeloid lineage and are the resident immune cell population in the CNS. They become activated in response to alterations in the environment like neuronal damage, as a physiological response to restore the homeostasis of the CNS (1). Oligodendrocytes are the cells responsible for myelin synthesis in the CNS. They can be found as progenitor cells (termed O2A cells in vitro as they can develop into either oligodendrocytes or type-2 astrocytes depending on the culture conditions (2)) or as mature oligodendrocytes that assembly and maintain myelin sheaths around the axons (3). Astrocytes are the cells that provide trophic, metabolic and structural support for neural networks. They also have a critical role in the maintenance of the Blood Brain Barrier, Ca2+ signaling or synaptic transmission, among others(4).

During the past years, the development and improvement of techniques to grow cerebral tissue in vitro has lead to a better understanding of the composition, function and biochemical structure of the brain. Particularly, the primary culture of glial cells is a highly powerful tool for neuroscientists to investigate interactions, properties and differentiation of these cells at the cellular and molecular level as they develop in culture in the same schedule as in vivo (5).

Among the techniques used for this approach, the most popular are Flow Cytometry sorting (6), Percoll Gradient (7) and Mixed Primary glial culture (8). In rats, the highest yield of the cell culture fluctuates between: 2,7×10e4 and 1×10e6 for microglial cells/brain (8,9), 7,5×10e5 and 1×10e5 for O2A cells/brain (8,10), and 1,5×10e6 and 1×10e7 for astrocytes/brain (8,11) with time considerations that often includes 6h of dissection and plating of nervous tissue plus 2-3 weeks of incubation. Moreover, these protocols require a high number of pups to increase the yield of one type of these cells, usually by decreasing the number of the others if a specific media is used (12).

We developed an economic, simple, and reproducible protocol (Fig.1), improved from previous modifications of our group (13) that were made according to the technique described by McCarthy and de Vellis (14). The method we show here is by far an easy, fast and economic way to obtain microglial, astroglial and oligodendroglial cells with high yield rates, high purity, low waiting times and low number of animals used, which supposes a useful method for in vitro studies such as assays of toxicity, cell division, migration, differentiation or apoptosis.

Some tricks can be applied to improve the development of the culture:

One of the most important remarks in this protocol is that it allows the simultaneous preparation of three glial cell type (microglial, oligodendroglial and astroglial) cultures from rat cerebral forebrains, obtaining a high number of cells with low time considerations and easy steps, and thereby optimizing the use of live animals used for in vitro approaches. See the flow chart showed in Figure 1 to visualize the whole protocol steps.

This work has been supported by grants from the Spanish Ministerio de Ciencia e Innovación (SAF 2007/60038, CAM S-SAL0261/2006), and by the ISCIII, RETICS Program (Red Española de Esclerosis Multiple, RD07/0060/0010). We are grateful to Dr. Molina-Holgado for his kindly advice and to E. Baides, A. Hernandez and J. Sancho for their excellent technical assistance. 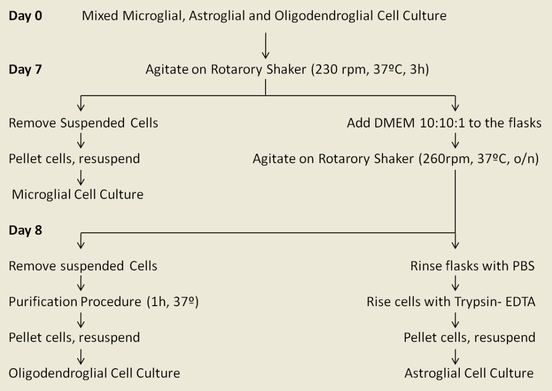 Phase contrast images showing the different stratum of the glial cell culture: after 7div, an astrocyte monolayer can be found in the bottom of the flask, and over it the oligodendrocyte cells layer (dark cells) and microglial cells (yellow rounded ones). After 230rpm shaking, the microglial layer is removed, and after 260rpm the detachment of oligodendrocytes leads to an astrocyte monolayer with few of other glial cell types.

Immunicytochemistry and purity of microglial cells (CD11b+ cells), oligodendrocytes (A2B5+ cells) and astrocytes (GFAP+cells) after the isolation of each cell type.

Supplementary Video 2: Evolution in time of the Mixed Glial Culture by phase contrast