Our observation showed the addition of cytochalasin-B to mouse embryonic stem cells (mESC) culture for CBMn analysis led to the induction of apoptosis in these cells. On the other hand, addition of cyt-B is the most critical part of the cytokinesis-block micronucleus assay (CBMn) technique that cannot be omitted. Thus, modification of the traditional CBMn assay seems to be necessary. In this paper, we attempt to troubleshoot this problem and show that the CBMn assay can be used in embryonic stem cells research, particularly as a reliable tool in monitoring the cytogenetic integrity of cells. The potential reasons of the observed induction of apoptosis in mESCs are also discussed.

The full text pdf version of this protocol can be accessed here.

Mouse embryonic stem cells (mESC) are pluripotent cells with a high nuclear-to-cytoplasmic ratio, round to oval nuclei, basophilic cytoplasm and round shaped cells that are traditionally co-cultured with “feeder” cells. The use of stem cells in research emphasizes the need to confirm their genetic integrity after different manipulations. For this purpose, many techniques with different capabilities have been used thus far, but most are expensive, time consuming, need special instruments and training. Adopting simple methods for stem cell research is a necessary step for stem cells in large-scale research projects, particularly in pharmaceutical bio-monitoring.

Cytokinesis-block micronucleus assay is a reliable and precise method for assessing chromosome damage.1 Basically, MNi originate from acentric chromosome fragments or whole chromosomes not included in the main nuclei following DNA replication and nuclear division 2. Although it has been a century since Howell and Jolly described Feulgen-positive nuclear bodies in human reticulocytes, also known as Howell-Jolly bodies 3, the term micronucleus (MN) was suggested for the first time by Boller, Schmidt and Heddle in the early 1970s 4. In our study cytokinesis-block micronucleus assay (CBMn) was performed as previously described by Fenech 5 with adaptation. It has been shown that CBMn assay provides a simple method to detect the genotoxic potential of mutagens after in vivo and in vitro exposure to biologic systems6.

Subculture of the cells

Micronucleus assay in isolated lymphocyte or cell lines culture does not require hypotonic treatment during harvesting. Hypotonic treatment may destroy necrotic and apoptotic cells, making them unavailable for assay 13. On the other hand, mESCs have a large nucleus surrounded by a narrow rim of cytoplasm. According to the all above items mentioned it seems the hypotonic treatment of mESCs is necessary and cannot be omitted.

Critical: Do not air-dry slides for longer than 10 minutes, otherwise cell and molecular morphology become altered, it makes difficult to score the slides. Store the slides in a microscope slide box in a cool, dry and dust-free cupboard.

Scoring: We examined one thousand bi-nucleated cells to measure MN formation in each slide prepared per sample (treated and control). For more details, we followed the Fenech 13.

Pause point: Fluorescent stained slides can be stored at 4ºC for 1 month.

MNi are morphologically identical to, but smaller than nuclei and have the following characteristics:

The cytokinesis-block micronucleus assay (CBMn) is a reliable and relatively easy method used for many years by scientists for biological assessments. Relative accuracy, simplicity, multi-potentiality, large tissue applicability of CBMn assay technology and its potency to become automated have made it a fascinating technology during last decades and will play a key role in mutagenicity assessment in the future. This technique is mostly used for lymphocytes and it has been not provided for embryonic stem cells study. In our study, routine CBMn led to unacceptable, substandard, unexplainable results. Although the entire process was based on the standard methods, however most of the mESCs population underwent DNA fragmentation [Fig. 3]!

To avoid occurrence of this problem, factors that might contribute to DNA fragmentation of mESCs in some circumstances such as attachment factors 14-16, LIF concentration 17, cyt-B concentration 18,19 were considered, however no significant effect were found. It has been showed that incubation of mESCs with cytochalasin-B (an anti-actin drug) caused marked alterations in cell shape and cytoskeletal organization 19. We observed same results in our study, that after treatment of mESCs colonies with Cyt-B, the cell attachment to each other and feeder layer (mEF) were essentially reduced, cells rounded up, and consequently cells were disaggregated. It has been postulated that single cell suspensions of mESCs lead to leakage oxidative phosphorilation components from mitochondria, these cells finally become committed to apoptosis, whereas this process was suppressed when they proliferated in aggregates 20.

According to above descriptions, modification of the timing of the standard protocol of CBMn assay for mESCs is the best way to solve this problem because reducing the incubation time, decrease the chance of detachment of cells from substrate.

Tauchi et al. showed that the best time for apoptosis analysis is 16 hours after treatment with toxic agents when there is a raise in the apoptosis rate and approximately most of the apoptotic cells are in the late stage of apoptosis 21. We have observed the same outcome in mESCs (Results not showed). On the other hand, mESCs show a maximum rate of bi-nucleated cells 16 hours after cyt-B inoculation. Thus, the incidence of bi-nucleated cells and late-stage apoptotic cells which characterize with chromatin fragmentation and cell membrane blebbing coincided with one another. So, instead of observing BN cells (which may or may not contain MNi) we encountered the cells that contained condensed fragmented chromatin [Fig. 4].

So harvesting before proposed time (16h) can be solution to avoid this coincidence. This may result in ignorance of major part of the cells, which have not reached the stage of cytokinesis, while the cyt-B treatment period is made shorter, consequently the cells that are near cytokinesis stage would be only trapped. 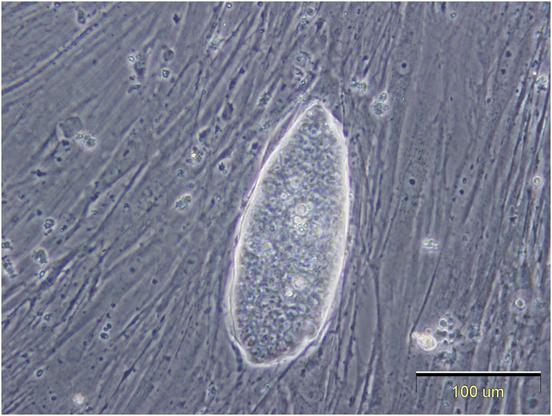 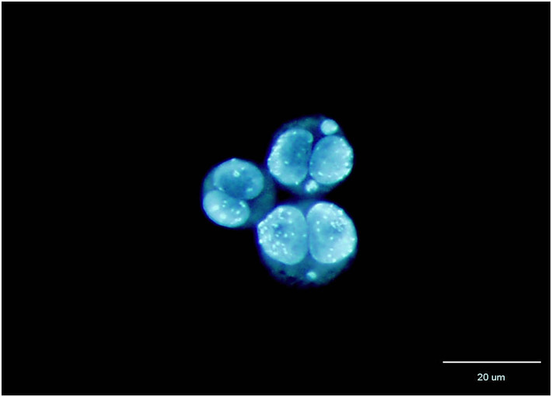 The above micrograph is a fluorescent image showing the bi-nucleated mouse embryonic stem cell RB1 cell line after treatment with cytochalasin-B and stained with Hoechst and Rhodamin dyes. 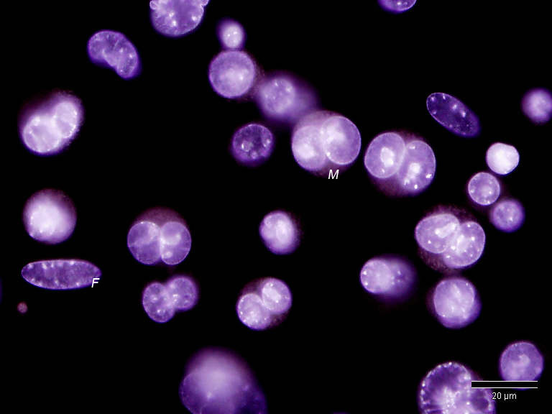 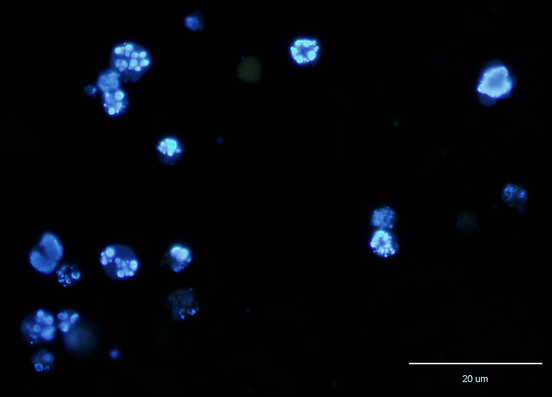 A fluorescent image of apoptotic cells (RB1) with disintegrated nuclei which due to the presence of cytochalasin-B in medium were unable to form cytoplasmic blebs (bubble formation).