We developed a protocol for in planta gene expression analyses in sliced rice sheath cells by modifying and optimizing biolistic particle bombardment techniques. By obtaining thin sections (400 um) of rice sheath cells, auto-fluorescence tissues from chlorophyll were eliminated. This system was validated through the localization of marker genes specifically expressed in nuclei, plasma membranes, and vacuolar membranes. Additionally, high transformation efficiencies of approximately 30% were achieved. Therefore, this protocol provides a new and rapid method for transient gene expression assays in rice. Protein secretion was examined in rice sheath cells using predicted secretory proteins from rice blast fungus, indicating that this method is practical for host plant-microbe interaction studies. The transient expression protocol established here is well suited for protein localization, secretion, and host-pathogen protein interaction studies in rice. A typical experiment can be completed in 3 days.

Rice is a vital food source, providing nourishment for more than 50% of the world’s population. However, this crop plant, like other cultivated plants, is vulnerable to adverse environmental factors such as abiotic and biotic stresses that occasionally and severely affect rice production and yield. When rice is stressed, self-defense mechanisms, including expression of genes, proteins, and metabolites used to lessen the effects of the particular stress, are activated. Among these molecular responses, proteins constitute a critical and functional line of defense toward protecting rice plant growth and development. The role of these proteins, including proteins secreted into the extracellular environment, is of great interest to biologists focused on understanding stress responses.

In this context, transient protein expression is a useful technique for investigating protein localization and functional analysis of stress responses in rice plants. Currently, the most widely-used in planta transient protein expression techniques use three different methods, including Agrobacterium-mediated transformation, protoplast transformation using polyethylene glycol (PEG) or electroporation, and biolistic bombardment expression (1-5). Agrobacterium-mediated transformation has been well established using various rice tissues, such as shoot apex, embryonic callus, and scutellum tissue (2,3). However, the production of transgenic plants takes approximately 3 to 4 months, a significant amount of time in the fast-paced research environment. In the case of PEG or electroporation-mediated transformation, protoplast tissues have been widely used5. This method is advantageous in that it is rapid. However, the loss of cell wall structure makes it difficult to detect proteins accumulating outside of the membrane. For this reason, a new biolistic bombardment method was established in which high-pressure gas is used to deliver foreign DNA into cells. Biolistic bombardment is a time-honored technique that has been used with many plants, and provides an efficient method for subcellular localization, cell-to-cell movement, and protein-protein interaction studies (6-9). However, biolistic bombardment is not well suited for rice, as the leaf epidermis consists of irregular cell layers and produces strong auto-fluorescence (10). Nevertheless, biolistic bombardment has been used for generating transgenic plants and for confirming protein secretion, but it has not been used for transient protein expression studies to date (7-9).

We developed a protocol that uses biolistic bombardment to analyze gene expression and subcellular localization in rice. Evenly-sliced leaf sheath tissue, a clear cell structure with little auto-fluorescence, was used for the biolistic bombardment assay. Expression efficiencies of nearly 30%, which were similar to levels in previously-published Arabidopsis and rice callus systems (6,11), were observed using a mCherry reporter gene expressed under the maize ubiquitin promoter. Our protocol provides a rapid and efficient way to analyze expression and subcellular localization of proteins of interest in rice cells. This biolistic bombardment protocol is also an appropriate tool for analyzing protein secretion. Protein secretion is an important mechanism for plant growth and regulation under normal and abnormal (abiotic and biotic stress) environmental conditions (12-17). For example, during the very early time periods of host-pathogen interactions when penetration by the invader occurs, both the host and the pathogen secrete large amounts of proteins into the host’s apoplastic region, a space between the cell wall and the plasma membrane (18-22). The secreted proteins from the host and pathogen interact with each other in this apoplastic region23. Thus, the analysis of protein secretion and protein interactions between the host and pathogen proteins in the extracellular space is critical to understanding plant-pathogen interactions. To study the functions of pathogen-secreted effectors, transgenic Magnaporthe oryzae (rice blast fungus) mutants carrying target genes fused with fluorescent reporters have been generated and expressed in planta (21,24,25). However, functional analysis of secreted effectors is difficult due to the low-efficiency and time-consuming process of fungal mutant generation. Therefore, the application of transient expression is sufficient for the study on plant-microbe interaction.

In our study, secreted proteins were analyzed in rice leaf sheaths using florescent reporters. Proteins localized outside the membrane were strongly expressed, suggesting that our protocol is suitable for in planta secretion analyses in rice. Effector proteins fused with fluorescent reporters were directly expressed in host cells. The interactions between host and pathogen proteins were observed within 24-48 h after bombardment. Therefore, our protocol provides a direct in planta expression method for rice that reduces the number of steps necessary for fungal mutant generation for analyzing the fungal secretome. A successful activation of defense reporter has been reported after transient expression of M. oryzae secretory proteins in rice sheath cells, suggesting this protocol makes possible large screens of pathogen effectors in rice (26,27).

To demonstrate the further utility and specificity of our approach, we compared the localization of the secreted proteins in rice with their localization in commonly studied onion epidermis. Differential expression of the two proteins in the rice and onion systems suggested that protein secretion mechanisms vary between host and non-host plants. Therefore, setting up a rice transient expression system is essential for in planta functional analyses in rice.

Advantages and limitations of the protocol

This protocol can be widely applied for protein expression, subcellular localization, and protein-protein interaction analyses. Rice transient expression is also a valuable tool for rice-pathogen interaction research. Furthermore, this protocol can be adapted for transient gene expression in other monocotyledon plants with minor modifications for sheath preparation, particle delivery pressure, or incubation times for signal detection.

This protocol clearly describes a rapid method for developing rice in planta transient expression and protein secretion. However, a few disadvantages still remain in the protocol. Setting up a biolistic particle delivery system and confocal fluorescent microscopy can be costly. As with other techniques for the study of rice, nearly 5 weeks is required to grow the rice for sheath sample preparation prior to the experiment. As preparation of the sheaths and sectioning can be difficult, practice is required.

The following points should be considered before beginning an experiment.

This transient expression protocol for rice sheaths is similar to those for other plants. However, the conditions used for gene delivery and sheath preparation strongly affect the delivery efficiency. The optimum pressure for the biolistic bombardment was confirmed using various rupture disks with 650, 900, and 1,100 psi, followed by incubation at 28°C in a dark chamber for 24 and 48 h after bombardment (hab). Equal amounts (2 μg) of DNA and macrocarriers were bombarded onto the sheaths with different delivery pressures. The efficiencies of mCherry signal expression are summarized in Table 2. Few signals were detected at delivery pressures of 650 and 900 psi, suggesting that these pressures are not suitable for gene delivery into rice epidermis. Average expression efficiencies of 10.8% and 31.3% were detected at 1,100 psi on sheaths with mCherry signals at 24 and 48 hab, respectively. Our transient expression protocol resulted in similar transient gene expression efficiencies, as did previous studies in Arabidopsis and rice callus (6,11). These data indicated that 1100 psi is the optimum DNA delivery pressure for rice sheath cells and that mCherry expression is higher after 48 hab than after 24 hab (Fig. S1).

The subcellular localization of marker proteins from Arabidopsis has been performed in rice leaf sheaths. The mCherry signals from mCherry-fused nuclear localization signals (NLS), H+-ATPase, and ACA11 were specifically detected in nuclei, plasma membranes, and vacuole membranes, respectively, by fluorescent microscopy, correlating with previous reports on Arabidopsis protein localization (26-31). Protein secretion was examined using the mCherry reporter fused with or without the signal peptide (SP) from the rice glucanase1 gene (OsGlu1). The OsGlu1 SP predicted by the SignalP 3.0 program (http://www.cbs.dtu.dk/services/SignalP/) consists of 20 amino acids (Table S1). mCherry fused genes were constructed under a maize ubiquitin (ZmUbi) promoter region that drives high–level, constitutive protein expression in rice (Fig. 2a) (31,32). mCherry without the SP was detected in the whole cell at 48 hab (Fig. 2b top). However, when mCherry was fused with the SP, it was detected as a secreted protein outside the membrane (Fig. 2b bottom). These data highlight the fact that the rice biolistic bombardment protocol presented here is appropriate for _in planta _subcellular localization and protein secretion analyses in rice.

To investigate whether this in planta secretion technique is able to confirm host-pathogen interactions, genes from M. oryzae, were selected for in-host secretion analysis. All of these proteins contained a signal peptide at the N-terminal region that was predicted by the SignalP 3.0 program (Table S1). Four M. oryzae genes (MGG02340, MGG06834, MGG06843, and MGG08331) with their predicted SPs were cloned, fused with the mCherry reporter, and constructed to be under the control of the _ZmUbi promoter (Fig. 3a). The in planta secretion of these proteins was performed in rice leaf sheaths, and all proteins accumulated in the apoplastic region at high levels. These proteins were also secreted into neighboring cells, indicating that pathogen SPs can be used for in-host protein secretion analyses (Fig. 3b). We then performed a comparative analysis of protein secretion in the commonly-used onion epidermis, which is not a natural host for M. oryzae. The four M. oryzae proteins were transiently expressed in onion cells. However, only two proteins (MGG06834 and MGG08331) were secreted, while the other two proteins (MGG02340 and MGG_06843) were enriched in membrane (Fig. 3c). The activation of rice defense promoter by secreted fungal proteins using this particle bombardment method has been shown in previously researches (26,27). These results imply that even though protein secretion systems commonly exist in plants, there are plant-specific differences.

Together, these data indicate that the development of this transient expression protocol for rice is necessary for in planta expression analyses. Furthermore, this technique is essential for the study of protein subcellular localization and protein-protein interactions between host and pathogen secreted proteins.

We thank Dr. Woo Sik Chung for supplying the NLS::RFP, H+-ATPase::RFP, and ACA11::RFP plasmids, and Dr. Jae-Yean Kim for supplying the mCherry vector. We thank Dr. Randeep Rakwal for reviewing and commenting on the manuscript. This work was supported by Basic Science Research Program through the National Research Foundation of Korea (NRF) funded by the Ministry of Education, Science, and Technology (2012-0005112 and NRF-2012R1A1A2040584), and Next-Generation BioGreen 21 Program (Plant Molecular Breeding Center, PJ008021), Rural Development Administration, Republic of Korea. 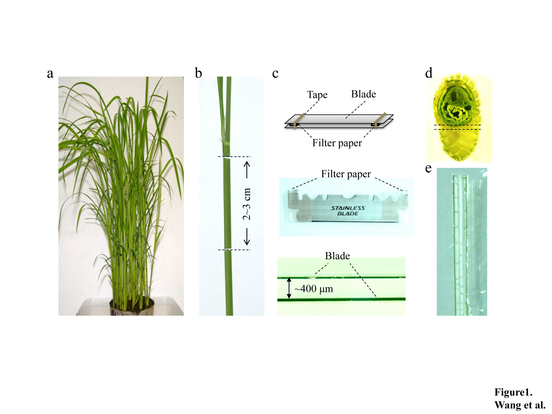 (a) Sheaths from 4-6-leaf stage rice plants were used in this experiment. (b) Rice sheaths were collected for sheath sectioning. (c) Schematic picture of sheath section blade (top); a prepared section blade (middle); enlarged view of the distance between blade edges (bottom). (d) A sheath section of approximately 400 μm was cross-sliced next to the stem. The dotted line indicates the cutting sites. (e) A thin section of leaf sheath was placed on half-strength MS medium. 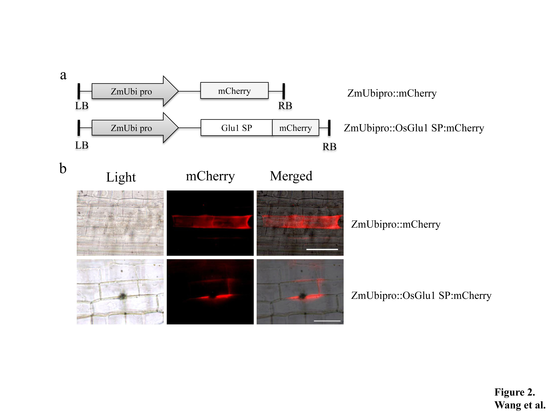 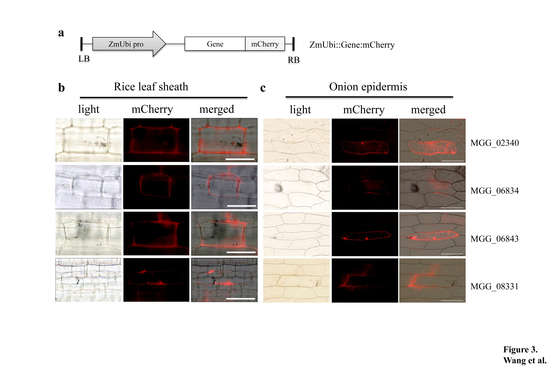 Table 2: Efficiency of particle bombardment at different pressure conditions at 24 and 48 hab.