A suitable microsurgical method for obstructive cholestasis in the rat

Obstructive cholestasis is characterized clinically by jaundice, discolored urine, pale stools and pruritus (1). The obstruction of the biliary tree, either intrahepatic or extrahepatic, causes a high rate of morbility and mortality in the human clinical field (2). The serious repercussions of cholestasis on the liver and on the systemic level (1,2) have led to the creation of many experimental surgical models so as to better understand its pathogenesis, prophylaxis, and treatment.

Several surgical techniques for developing extrahepatic cholestasis have been described, especially in the rat. The techniques that are generally used to produce obstructive jaundice in the rat are macrosurgical, since they do not require magnification devices to be performed. The macrosurgical extrahepatic cholestasis called common bile duct ligation (BDL) is the most frequently used, and it consists of sectioning the common bile duct between ligatures (3-5). This technique induces potential models of reversible obstructive jaundice, since they imply a high incidence of recanalization of the extrahepatic biliary route (6), which can be avoided by placing the duodenum and the distal part of the stomach between the two ligated and sectioned ends of the bile duct (6).

However, rats with macrosurgical extrahepatic cholestasis by BDL develop an infected hilar biliary pseudocyst by the progressive dilation of the proximal end of the bile duct (6). At 16 days of postoperative evolution, the biliary culture of these pseudocysts is positive, the most frequent germs being Escherichia coli and enterococcus (7). Furthermore, the animals generally evolve with hepatic, intraperitoneal and pulmonary abscesses, and their elevated early mortality is attributed to sepsis8.

Microsurgery makes it possible to develop obstructive jaundice in the rat by the resection of the extrahepatic biliary tract that includes both the common bile duct as well as the bile ducts aimed at each of the four hepatic lobes (8). With this technique, the non-existence of the residual proximal extrahepatic biliary tract prevents both the formation of hilar biliary pseudocysts as well as abdominal-thoracic abscesses, and prevents mortality during the evolution in relation to the bile duct-ligated model (8,9).

To achieve reproducible results, a harmonization of the microsurgical technique for extrahepatic cholestasis in the rat is needed. Here, we describe a step-by-step surgical approach to resect the bile ducts that drain the four lobes of the liver in continuity with the common bile duct up to the beginning of its intrapancreatic segment by means of a microsurgical technique (8-11).

This protocol is not associated with short-term mortality and has been used to produce data for several publications (12).

In addition to the surgical technique, the importance of anesthesia, analgesia, postoperative care and post-operative vitamin K and antibiotic administration on the outcome of microsurgical extrahepatic cholestasis has also to be taken into account.

The choice of a particular anesthetic regimen will be influenced by the overall objectives of the experiment and should balance practical considerations, animal welfare issues and the potential interactions with specific research projects. Particularly, moderate periods (10-60 minutes) of general anesthesia, like those necessary for developing this protocol, can be provided either by using a volatile anesthetic or by intraperitoneal or intramuscular administration of injectable anesthetics. If the use of volatile anesthetic is practicable, then researchers are strongly recommended to consider their use since they allow easy modulation of depth of anesthesia and rapid recovery. However, isoflurane use requires a vaporizer that may not be available in every institution. In that case, ketamine/xylazine should be used instead (17). Indeed, today the most useful combinations for achieving medium duration surgical anesthesia are the mixtures of the dissociative anesthetic Ketamine, with either medetomidine or xylazine (alpha-2 agonist sedative analgesics), and particularly the latter, are the most widely used anesthetic combinations for small rodents. Co-administration with ketamine provides up to 30 minutes of medium planes of surgical anesthesia, with excellent muscle relaxation, smooth recovery, and a moderate degree of postoperative analgesia (18). Thus, ketamine/xylazine is an injectable anesthetic protocol currently used for this procedure (12,14,16), although both drugs are hepatotoxic. Ketamine is not associated with mortality, although it still has more side effects -like longer awakening times and higher hepatotoxicity- than isoflurane, which is the least toxic among the commonly used anesthetics (17).

The use of effective analgesic regimens can considerably contribute to reducing animal pain and distress. Prompt recognition and treatment of postoperative pain is a key responsibility of experimental surgeons. Many effective analgesics for laboratory animals are available. Desirable qualities of the ideal analgesic for experimental surgery include effective pain relief, minimal adverse effect on respiration, appetite, or other physiologic parameters; ease of administration and convenient dosing schedule (18). It is very important to integrate an analgesia regimen with the overall scheme of perioperative care, and to try to implement preemptive and multi-modal analgesic therapy. Opioids are still the analgesics most used in severe pain in most species and they are usually required to produce effective pain relief. A practical problem which arises when using opioids is that the duration of action of most of these agents is under 4 hours. Opioids are most effective in controlling postoperative pain if they are administered before pain is experienced. For this reason, it is preferable to administer opioids intraoperatively, or immediately following the completion of surgery. Buprenorphine is an opioid analgesic and a thebaine derivative, and acts as a partial agonist at the mu-opioid receptor, with antinociceptive potency 25 to 40 times higher than morphine. Buprenorphine is normally administered by subcutaneous or intravenous dosing and the current recommended clinically effective dose is 0.05 mg/kg s.c. in rats. In circumstances where injectable agents such as ketamine/medetomidine or pentobarbitone are used in rats, pre-anesthetic administration of buprenorphine reduces the subsequent anesthetic dosage by up to 20%18. Buprenorphine is currently used for post-operative analgesia (12,16) and also has hepatotoxic effects (17). Obviously, it would be interesting to study the real hepatotoxic action of both Ketamine/xylazine and Buprenorphine in microsurgical extrahepatic cholestatic rats. However, these drugs do not cause mortality although with this operation we obtain an experimental model of chronic liver insufficiency (14,15).

Hypothermia prevention is crucial in rodent surgery. All anesthetics affect thermoregulation, and an animal’s body temperature will fall during anesthesia unless measures are taken to prevent this. Small animals are particularly susceptible to this problem since they have a large surface area available for heat loss, relative to their small body mass. It is important to try to prevent heat loss, rather than to try to revive a severely chilled animal. All anesthetized rats will require some additional heating, and should be insulated to minimize heat loss. Effective insulation can be provided either by wrapping the animal in cotton wool, followed by an outer wrapping of aluminum foil, or by using “bubble packing”. After wrapping the animal in an insulating layer of material, a “window” can be cut to expose the operative field. Additional heating can be provided by heat lamps and heating blankets, but care must be taken not to burn the animal. It is preferable to use a thermostatically controlled heating blanket, regulated by the animal’s body temperature using a rectal probe. The importance of the body temperature monitoring cannot be over emphasized. Hypothermia is undoubtedly the most common cause of mortality during anesthesia in rats. It is also important to ensure that measures to prevent hypothermia are continued throughout the recovery period (18).

Rats should recover within 15 minutes after the end of surgery and Ketamine/xylazine anesthesia. When the previously described extrahepatic microsurgical cholestasis technique is performed correctly, no mortality is seen.

Survival is over ten weeks thanks to the use of broad-spectrum antibiotics and vitamin K administration.

The microsurgical extrahepatic cholestasis model has proven to be a reliable means of research related to biliary fibrosis (cirrhosis). The microsurgical resection of the extrahepatic biliary tract produces an experimental model of liver inflammation, characterized by a high Knodell hepatic activity index (4), bile proliferation and fibrosis12,14,22. Microsurgical extrahepatic cholestasis induces portal hypertension and an inflammatory response of splanchnic origin, mediated, among other inflammatory cells, by mast cells13,23 in which T-helper type-2 (Th2) cell associated cytokines and Th1 cytokines are involved16.

The microsurgical technique of extrahepatic cholestasis, that consists in the resection of the extrahepatic biliary tract in the rat, when it is compared to “classical” macrosurgical techniques, prevents the progressive dilation of the common bile duct and the subsequent development of a big infected bile pseudocyst with multiple organ abscesses and early death sepsis in the animals.

Using this microsurgical models, researchers can study the hepatic (biliary fibrosis), splanchnic (portal hypertension) and systemic (chronic hepatic insufficiency) complications of the obstructive cholestasis, in the most advanced evolutive periods, which are achieved using macrosurgical (common bile duct ligated) models. This relevant advantage is probably due to the absence of severe biliary infection and sepsis.

The authors thank Maria Elena Vicente for preparing the manuscript, Elizabeth Mascola for translating it into English, and the librarians of Complutense University Medical School. 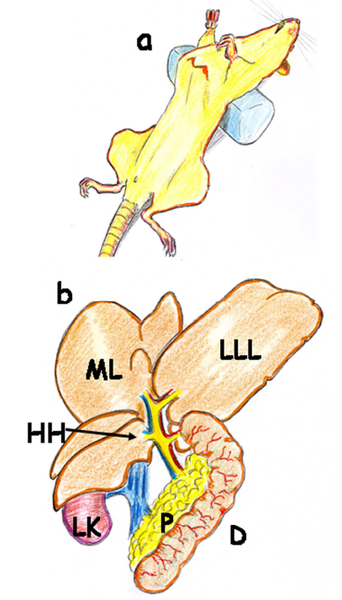 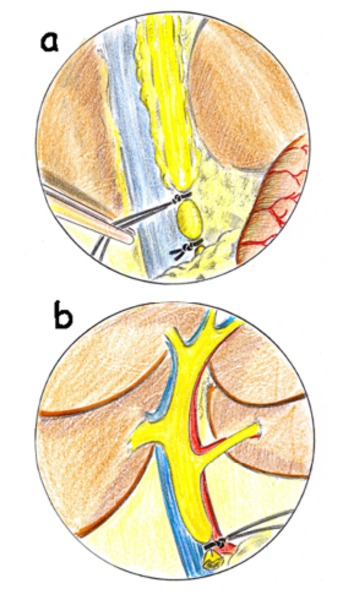