A protocol for in vivo detection of reactive oxygen species

2’,7’-dichlorofluorescein (H2DCF) and Dihydroethidium (DHE), have been used extensively in tissue culture experiments to evaluate reactive oxygen species (ROS) production. However, it will be more advantageous to be able to detect real time ROS production in live tissues, especially in Drosophila where the extensive genetic tools available make it possible to compare the phenotype of mutant tissue juxtaposed to its wild-type neighbor. Here, we describe a protocol for imaging ROS production in Drosophila using either H2DCF or DHE. We highlight the specific advantage posed by monitoring ROS production in vivo by comparing the phenotype of cells mutant for genes encoding mitochondrial proteins with their wild-type neighbors. We also show from staining of the germarium that this technique is capable of detecting different levels of ROS production among cells within the same tissue. The whole protocol, from dissection to capturing of images by confocal microscopy can be completed within 2 to 3 hours; and it can be adapted for use in virtually any Drosophila tissue.

All aerobic organisms depend on molecular oxygen for survival. During aerobic energy metabolism, electrons are transported through a series of electron carriers in the mitochondrion to generate an electromotive force which is harnessed to synthesize ATP ; the final acceptor of electrons, molecular oxygen, is reduced to form water (1). However, what might appear as a cost-effective method of synthesizing ATP is fraught with problems as a good proportion of the molecular oxygen escapes complete reduction; and becomes partially reduced to form a host of highly reactive metabolites of oxygen, collectively referred to as reactive oxygen species (ROS). While there are numerous endogenous and exogenous sources of ROS, over 90%of ROS is produced in the mitochondria (2).

Direct imaging of ROS in biological samples has proven to be extremely challenging. ROS are by nature very reactive molecules and are therefore extremely unstable, making it impossible to image them directly. Thus detection of ROS levels has relied largely on detecting end products – either by chemiluminescence or by fluorescence – that are formed when specific compounds react with ROS (3 4).

One of the techniques for detecting intracellular ROS, particularly hydrogen peroxide depends on oxidation of the non-fluorescent substrate 2’,7’-dichlorofluorescein (H2DCF) to a green fluorescent product (5 6). As cell membranes are permeable to esterified forms of H2DCF, they can enter cells freely, where as a result of deacetylation by intracellular esterases, they become trapped intracellularly. Depending on the nature of the sample used and the question being asked, the rate of oxidation may be monitored by a fluorimeter, fluorescence microscopy or by flow cytometry. However, like other dyes for ROS detection, a number of concerns have been raised in connection with this technique. For instance, it has been reported that even after hydrolysis by intracellular esterases, the oxidized product is capable of leaking out of some cell types (7). In addition, the dye can be oxidized by a host of ROS species such as nitric oxide, peroxynitrite anions, and even organic hydroperoxides (8 9 10). Notably, even in cases where H2DCF is oxidized by hydrogen peroxide, the reaction is significantly accelerated by the presence of peroxidases 10. In yet another report, it was shown that oxidation of H2DCF depended on the concentration of glutathione (11). Thus, it has been suggested that instead of serving as a specific proof of increased ROS production, H2DCF is perhaps an indicator of the degree of general oxidative stress.

Dihydroethidium (DHE), by virtue of its ability to freely permeate cell membranes is used extensively to monitor superoxide production (12 13 14). It had long been postulated that DHE upon reaction with superoxide anions forms a red fluorescent product (ethidium) which intercalates with DNA (15 16). However, more recent studies have suggested that the product is actually 2-hydroxyethidium (17). DHE is perhaps the most specific and least problematic dye; as it detects essentially superoxide radicals, is retained well by cells, and may even tolerate mild fixation. (18 19)

The time required for larva/adult fly collection and dissection is variable, but is usually between 30 minutes and 1hour, depending on the number collected and the experience of the investigator. The intermediate steps usually take about an hour, while capturing by confocal microscopy takes about 30 minutes. Thus the whole procedure can be accomplished within 2 to 3 hours.

Troubleshooting advice can be found in Table 1.

As shown in figure 1, the protocol for ROS detection using DHE can be used to evaluate ROS production in essentially any Drosophila tissue. Given that inhibitors of mitochondria complex I such as rotenone, lead to increase ROS production, we knocked down the expression of the complex I protein NaDH Dehydrogenase subunit 75 ( i.e ND75) , using RNA interference (RNAi). Ay-GAL4 (20) clones expressing RNAi to ND75 in both salivary gland and fat body showed increased ROS production as expected (figure 1a – f). Additionally, we monitored ROS production in ey-flp (eyeless promoter driving the expression of flippase) generated clones that were mutant for the complex I protein Pdsw and observed increased ROS production (figure 1g – i). This further establishes that the protocol is suitable for use in multiple tissues. 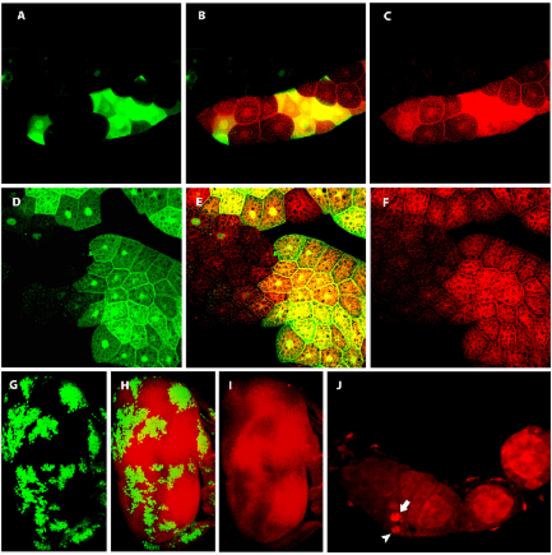 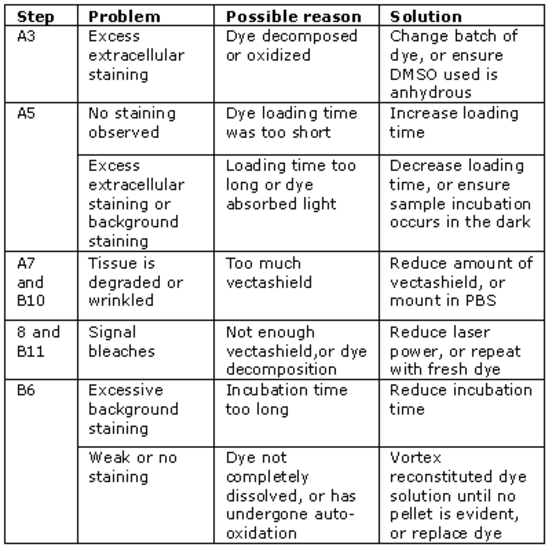