A protocol for generation of transgenic mice by manipulating spermatogonial stem cells in vivo.

This protocol describes a technique for the generation of transgenic mice by in-vivo manipulation of spermatogonial stem cells (SSCs) with a high rate of success. In this study SSCs in pre-pubescent animals were infected in vivo with recombinant lentiviruses expressing EGFP-f and mated with normal females. All male pre-founder mice produced transgenic pups with an overall success rate of over 60%. The transgene was heritable and the pre-founder mice could be used in multiple mating experiments. This protocol could be extended to perform over-expression/knockdown screens in vivo using bar-coded lentiviruses, thus permitting the design of genetic screens in the mouse. Further, this technology could be adapted to other laboratory animals resulting in the generation of model systems that closely approximate human development and disease.

The generation of genetically modified mice has spurred great advances in our understanding of various aspects of growth and development. Multiple technologies have used either injection into a one celled embryo followed by implantation into a pseudo pregnant mother 1, or used stem cell aggregation techniques to generate either knockout 2 or knockdown mice 3. These experiments are expensive, labor-intensive, time-consuming and require several female donors.

Spermatogonial stem cells (SSCs) are responsible for the production of spermatozoa 4 and are an appropriate target for germline modification 5. Nagano et. al. have generated transgenic mice by infecting SSCs in vitro with recombinant retroviruses followed by xenogenic transplantation of the cells into the testes of a male mouse 6. In some cases the recipient mice were unreceptive to the donor SSCs 6 and the overall success rate was rather low. Similarly, in vivo transduction of SSCs with retroviral constructs carrying a lacZ gene, resulted in a poor success rate of 2.8% 7. The low success rates post implantation, however precluded these from replacing embryonic injection. Similar experiments using lentiviruses, resulted in better success rates 8. Other methods employed in the recent past have infected fertilized eggs in vitro with recombinant lentiviruses, followed by implantation of the embryo into pseudopregnant females 9. While these methods provided better success rates, the implantation experiments are technically cumbersome and require several female donors. A recent report has also described the generation of recombinant spermatozoa in organotypic cultures that could be used to generate transgenic mice 10. While this method generated transgenic animals at high efficiency, generating organotypic cultures is not trivial and is not performed in most laboratories. Recently, a report has described the generation of transgenic mice after electroporation of DNA into the testes of an adult mouse. 16 of 17 fore founder mice generated in that study were able to sire transgenic pups. However, the report did not mention the rate of transgenesis in the pups 11.

This report describes a new cost effective, faster technique with a high success rate for generation of transgenic mice by in vivo viral transduction of the EGFP-f transgene into undifferentiated spermatogonia. These fore-founder male mice were mated with wild type female mice to generate transgenic pups. The rate of transgenesis was greater than 60% and the transgene was inherited in the germ line. This rapid protocol for the generation of transgenic mice could be used to design and perform over-expressor/knockdown screens in the whole animal, thus enhancing our knowledge of disease and development.

In vivo transduction of the desired gene in the testis

Note: In mice, it takes about 30 days to complete a cycle of spermatogenesis during which period a spermatogonia differentiates into sperm. Hence, transgenic sperm produced after 30 days of LV injection presumably originates from the spermatogonial cells in which permanent integration of the transgene occurs at the time of LV injection.

The experiments in this report describe the development of a simple, cost effective, and efficient technique for the generation of transgenic mice by in vivo transduction of the desired gene/shRNA construct into undifferentiated spermatogonia of the testis. This technology does not compromise the fertility of the off-spring, resulting in germline transmission of the transgene, using a limited number of animals. Previously published reports have demonstrated that lentiviral mediated transgenesis results is relatively stable and can be inherited in the germline 9,13-15. Thus, the use of lentiviruses as a vector delivery system to generate transgenic animals does not compromise inheritance or the development of the animal, results that are consistent with those obtained in this report. Further, previous protocols that modify spermatogonial stem cells, either in vitro or in vivo, used retroviruses and yielded transgenic pups at very low efficiencies 6,7. Previously, male rat germ cells were transduced in culture using HIV-1 based lentiviral vectors, which were then transplanted into the testis of wild type rats8. The rate of colonization of the recombinant germ cells in wild type testis was low (33%) and only one of three male mice was fertile. The founder mice in these experiments produced founder pups at a rate of 30% 8. Using the process described we have generated transgenic mice expressing EGFP-f with a very high rate of transgenesis (61%) Table 1, with all the animals being able to sire transgenic pups, leading to the rapid generation of multiple transgenic pups with different integration events allowing the generation of multiple transgenic lines. The procedures described in this report are easily performed and require a small simple surgery. Although, the rate of transgenesis reported here may not be better than the conventional lentiviral transgenesis method 9, the technique is cost effective, simple and faster to perform. Further, infecting the spermatogonial stem cells in vivo allows the repeated use of the pre-founder, eliminating the necessity to repeatedly infect embryos or organotypic cultures with lentiviruses. Further, as demonstrated here the pre-founder mice can be mated multiple times, resulting the generation of a number of transgenic pups. As multiple transgenic lines are required to rule out integration site specific events, the generation of multiple lines described herein results in a quick analysis of the phenotype and allows experiments to proceed at a rapid pace.

This work was funded by the Department of Biotechnology, India. 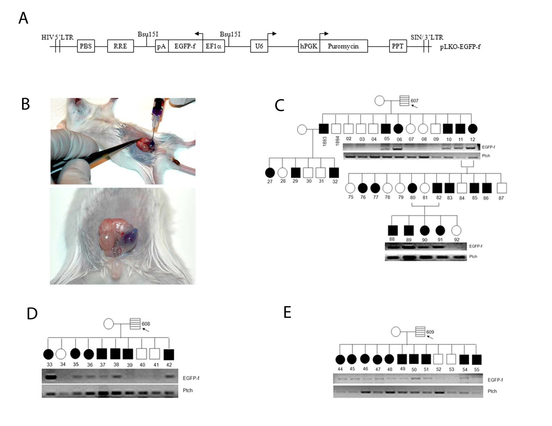 A. Design of the vector used for generating transgenic mice. B. Injection of recombinant lentiviruses into mouse testis. C-E. Pedigree analysis for pre-founder mice 607 (c), 608 (d) and 609 (e) showing germline transmission of the transgene. Individual mice were assigned numbers for further experiments. Genomic DNA amplification using primers for EGFP-f or patch (as a loading control) are shown. 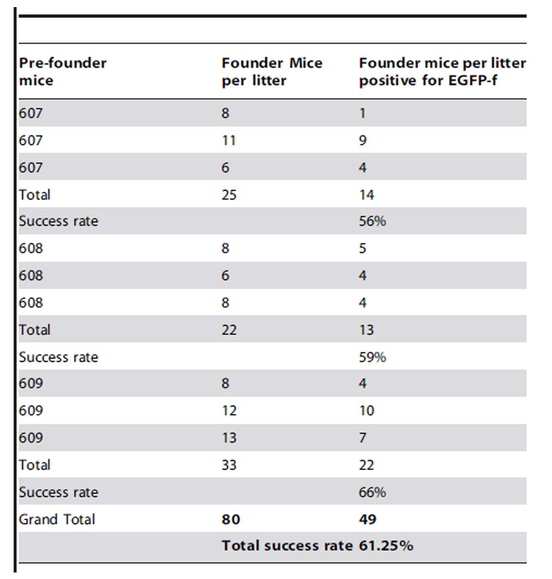 The pre-founder mice were mated with multiple WT female mice and the frequency of EGFP-f positive pups determined after each mating. Note that an overall success rate of greater than 60% was obtained in these matings.

A copy of the protocol in Word doc. form.