Here we describe detailed methods that allowed us to derive embryonic stem cell lines by nuclear transfer of fibroblasts from a newborn and from a type 1 diabetic adult. The protocol is based on the insight that 1) agents for cell fusion can act as potent mediators of oocyte activation by compromising maintaining plasma membrane integrity; minimizing the concentration at which they are used, and at least transiently remove calcium from the medium can improve developmental potential. 2) and on the insight that an efficient stimulus for oocyte activation is required; 3) and that histone deacetylase inhibitors facilitate reprogramming after nuclear transfer. A realistic expectation is that this protocol will result in about 10% of the oocytes developing to the blastocyst stage, most of which will be suitable for stem cell derivation. While most aspects of the protocol can be well controlled, variation in developmental efficiency when using oocytes of different donors should be expected.

Note: this protocol is a guideline that allows ES cell derivation after somatic cell nuclear transfer. The author strongly discourages the use of this protocol or aspects of it in attempts for human reproductive cloning.

The derivation of embryonic stem cell lines by somatic cell nuclear transfer yields stem cells that are genetically identical to the donor of the somatic cell nucleus. In the late ’90s, it was proposed that such cells might be useful to generate replacement cells and tissues, a concept referred to as ‘therapeutic cloning’ [1, 2]. Although nuclear transfer in many animal species had been successful for several years [3], establishing a nuclear transfer protocol in human eggs proved to be more challenging. One aspect impeding progress was the ability to procure high-quality human oocytes. Only few groups had access to oocytes for stem cell research. The publication of guidelines on oocyte donation for research by the International Society for Stem Cell Research (ISSCR)[4, 5], by the American Society for Reproductive Medicine (ASRM) [6], and by the Human Fertilization and Embryology Authority in the UK 7, as well as the demonstration that recruitment of oocyte donors without any form of compensation was not practical [8], paved the way for compensated oocyte donation programs in both the United States [9, 10] and in Britain [11].

Besides the logistical limitations to obtain good quality oocytes, several lines of evidence suggested that protocols resulting in efficient development to the blastocyst stage in various mammalian species were either not efficient or failed entirely when applied to human oocytes. Researchers working with Advanced Cell Technology reported developmental arrest at the cleavage stage after somatic cell nuclear transfer [12-14], and though parthenogenetic blastocysts could be obtained, they were of poor quality and did not result in embryonic stem cell lines [15]. Another group at Seoul National University in South Korea also had access to a significant number of high-quality human oocytes, and was able to derive a parthenogenetic embryonic stem cell line. Originally reported as a nuclear transfer ES cell line, others discovered that the cell line was of parthenogenetic origin [16]. Apparently, oocyte enucleation followed by somatic cell nuclear transfer did not result in development that would allow ES cell derivation. Other groups similarly reported difficulties in obtaining development beyond the cleavage stage following somatic cell nuclear transfer, though not all had access to high quality human oocytes [9, 17-21], and few used stringent standards to genotype the embryos obtained. The protocols used for nuclear transfer were all reminiscent of protocols that had been established using sheep or cow oocytes [22]: the use of somatic cell fusion by an electrical pulse, followed by oocyte activation with a calcium ionophore and the kinase inhibitor 6-dimethylaminopurine (6-DMAP) had been successful in sheep and in bovine [22, 23], but was apparently very inefficient with human oocytes. And even modifications that had resulted in rhesus macaque nuclear transfer ES cell lines [24], including the use of spindle birefringence instead of Hoechst and UV for oocyte enucleation [25], did not significantly improve development after human somatic cell nuclear transfer [9].

Preparation of somatic cells: Plate somatic cells in DMEM containing 8-10% Standard FBS (antibiotics may also be used) approximately 10 days before the planned experiment. Allow somatic cells to reach confluence. Change medium every 2-3 days. The cells will be confluent about 5 days before the experiment and less than 0.5% should be in S-phase at the time of the nuclear transfer experiment. The number of S-phase cells can be determined by EdU staining.

Media Preparation is as described in Reference [30] and provided here for convenience.

It is strongly recommended that the laboratory have an ongoing research program on animal oocytes. This will enable using essentially identical conditions for somatic cell nuclear transfer. Mouse oocytes are most readily accessible, and should be used to quality control all reagents and solutions. For mouse nuclear transfer, some species-specific changes to the nuclear transfer protocol are required. Mouse oocytes do not fuse well with somatic cells when using inactivated Sendai virus; the researcher may use direct injection for nuclear transfer. And the strength of the fusion pulse may need to be adapted. For how to obtain mouse oocytes, see reference [34]. In parallel, the laboratory should have expertise at human ES cell derivation and iPS derivation. Somatic cells may be used to generate iPS cells to determine if the somatic cells are of good quality and can indeed be reprogrammed.

A realistic expectation is that this protocol will result in about 10-20% of the oocytes developing to the blastocyst stage, most of which will be suitable for stem cell derivation. Variation in development between oocyte donors should be expected.

Establishing this protocol requires a significant institutional commitment and a dedicated research program with researchers skilled at manipulating oocytes and embryos.

Figure 1: Example of possible setup of the manipulation dish 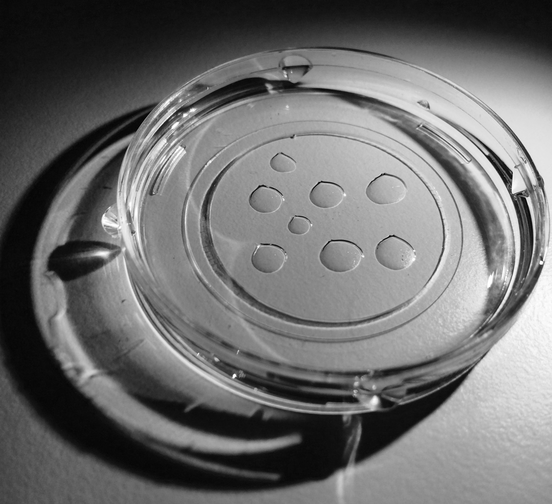 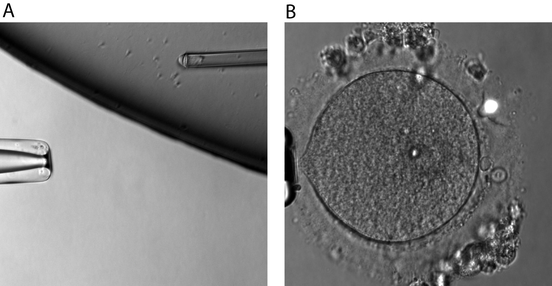 a) exposing only one side of the cell to the virus is sufficient for cell fusion. b) The laser is set at low power and only a very small opening is made for cell transfer so the zona can be used to confine the somatic cell between zona and the oocyte.

This work was supported by the New York Stem Cell Foundation and the New York State Stem Cell Program (NYSTEM) IIRP Award no. C026184. D.E. is a NYSCF-Robertson Investigator. D.E. wrote the protocol with input from G.C., G.C. made the movie.