A one-step kinetics-based rapid sandwich enzyme-linked immunosorbent assay (ELISA) procedure has been developed for human fetuin A (HFA), an important disease biomarker for inflammatory diseases and malignancies. It is highly simplified and cost-effective as it employs only a few minimal process steps. EDC-activated anti-HFA antibody (Ab) was admixed with 1% (v/v) 3-aminopropyltriethoxysilane (APTES) in 1:1 (v/v) to form a stable complex, which adhered to a KOH-pretreated microtiter plate (MTP). Thereafter, the immunoassay (IA) procedure detects HFA with a dynamic range, limit of detection (LOD) and analytical sensitivity of 0.1-243 ng mL-1, 0.3 ng mL-1 and 1.0 ng mL-1, respectively. The developed IA exhibits similar analytical precision to that of conventional sandwich ELISA for analysis of HFA spiked in diluted human whole blood and serum, and HFA in ethylenediaminetetraacetic acid (EDTA)-plasma of patients. Therefore, this generic procedure can be reliably employed for the detection of HFA and other disease biomarkers.

ELISA has been the most widely used immunoassay (IA) for the detection of HFA and the accepted gold standard for the detection of HFA in biomedical diagnostics. In brief, the conventional colorimetric (1,2), chemiluminescent (3) and fluorescent ELISAs require prolonged assay duration of several hours. Various other IA formats (4-6), such as surface plasmon resonance (SPR), having a critically reduced IA duration of just a few minutes, have also been developed recently (7,8). However, they require an expensive and disposable SPR chip, thereby rendering them unsuitable for high-throughput analysis. Therefore, there is an immense need for cost-effective, rapid, simplified and highly-sensitive IA formats for the detection of HFA.

HFA is a member of the cystatin superfamily, which is commonly present in the cortical plate of the immature cerebral cortex and the hemopoietic matrix of bone marrow. It is secreted into the blood stream as a liver-derived protein with concentration in the range of 450-600 µg mL-1 (9,10). The physiological role of HFA is to counteract the production of proinflammatory cytokines and act as an inhibitor of soft tissue calcification (11). It constitutes a major component of mineralo-organic nanoparticles that are likely responsible for inflammation and calcification (12). The decreased HFA levels may indicate cardiovascular risks at an early stage (13) in dialysis (14), hypothyroidism (15), and atherosclerosis (16) patients. The decreased HFA levels in plasma could be linked to insulin resistance and metabolic syndrome (17) as HFA exhibits high binding affinity to insulin receptors that specifically inhibit the tyrosine kinase activity (18). HFA inhibits adiponectin that indirectly upregulates the secretion of inflammatory cytokines from macrophages, which increase the risk of cardiovascular-associated problems (19). The HFA level in serum has been observed to decrease further in case of acute alcoholic hepatitis, chronic autoimmune hepatitis, fatty liver, alcoholic and primary biliary cirrhosis, and hepatocellular carcinoma (20). In contrast, the increased HFA levels in serum may be responsible for cancer cell adhesion and metastasis (21,22). Inflammatory conditions, such as diet-induced obesity and type 2 diabetes, have been proposed to be related to fetuin A and fatty acid supported signaling via toll-like receptor 4 (23). Similarly, the concentration of HFA needs to be determined in case of neuroinflammatory diseases (24), where it has been found in demyelinated lesions and in grey matters (25). Therefore, the personalized HFA monitoring is recommended in the modern society in order to effectively monitor and manage diet-related inflammatory disorders, such as metabolism-associated syndrome (26), and a broader range of fetuin A-related immune dysfunctions.

This article describes a highly-simplified and cost-effective sandwich ELISA procedure that enables the detection of HFA in clinical samples in 30 min (27) (Fig. 1). The developed IA (DIA) has ~ 16-fold reduced IA duration and a critically reduced number of process steps, compared to conventional sandwich ELISA. It employs a superior Ab immobilization strategy for the covalent leach-proof binding of capture Ab in just 45 min. The demonstrated high analytical precision and stability evinces the potential applications of DIA in healthcare, industrial and bioanalytical settings in addition to the development of new biosensor or lab-on-a-chip based IA formats.

Troubleshooting advice is provided in Table 1.

The DIA is highly simplified and cost-effective, which critically reduced the IA assay duration from 20 h (commercial HFA sandwich ELISA) to just 30 min. It detects HFA with a dynamic range of 0.1-243 ng mL-1 and linearity between 3-243 ng mL-1 (Fig. 2A). The LOD, analytical sensitivity, EC50 and correlation coefficient (R2) values were 0.3 ng mL-1, 1.0 ng mL-1, 24.2 ng mL-1, and 0.998, respectively. It detects the entire pathophysiological concentration range of HFA (0.15-600 µg mL-1) in spiked human whole blood and serum samples after appropriate dilution (Fig. 2A). The intraday and interday variability, obtained from five assays repeats in triplicate in a single day and on five consecutive days, respectively, were 1.8-7.3 and 2.4-12.1, respectively. The DIA was highly specific for HFA as there were no non-specific interactions between the immunological assay components, which were demonstrated by the use of various experimental process controls. Similarly, there were no non-specific interactions and interference with the specific HFA detection in the presence of selected non-specific proteins, such as LCN2, HSA, IL-1β, IL-6, IL-8 and TNF-α, which are usually found elevated along with HFA in case of infections and other disorders (Fig. 2B).

The DIA correlated well with the conventional sandwich ELISA for the detection of HFA (0.1-9.0 ng mL-1) spiked in diluted human whole blood and serum (Table 2). The percentages recoveries for HFA-spiked diluted human whole blood and serum were in the range of 96.7-110 and 93.3-110, respectively. Similarly, there was good agreement between the results obtained by the DIA and conventional sandwich ELISA for the detection of HFA in anonymized EDTA plasma samples of patients (Table 3). The anti-HFA Ab-bound and BSA-blocked MTPs were also analyzed for functional stability, confirming the leach-proof covalent binding of capture Ab to the MTP. There was no significant decrease in their functional activity, when stored at 4 ºC in 0.1M PBS, pH 7.4 for up to 8 weeks (Fig. 2C), thereby attesting their suitability for biomedical diagnostics, where the Ab-bound MTPs are usually stored for up to 4 weeks to facilitate rapid HFA detection. The functional stability of Ab-bound MTPs was further analyzed for 4 weeks by storing them dispensed with IA solution comprising of biotinylated anti-HFA detection Ab preconjugated to SA-HRP (Fig. 2D). There was no significant decrease in functional activity of Ab-bound MTPs, as employed in DIA procedure. Being generic, the DIA procedure can be reliably employed in biomedical and bioanalytical settings for the detection of various disease biomarkers. Moreover, based on its high simplicity, minimal steps and cost-effectiveness, it can be employed in lab-on-a-chip technologies, microfluidics and smart system integration for the development of novel and fully automated IVD kits.

Figure 1: Schematic of the DIA procedure 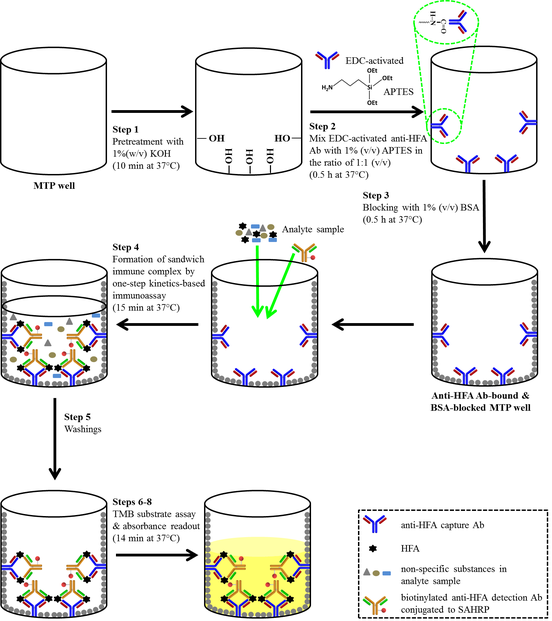 Schematic of the one-step kinetics-based DIA procedure for the rapid detection of HFA.

Figure 2: Bioanalytical performance of the DIA 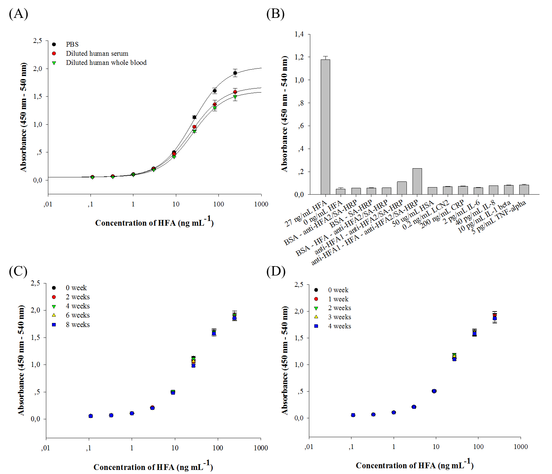 Bioanalytical performance of the one-step kinetics-based DIA (27). (A) Detection of HFA in PBS (10 mM, pH 7.4), diluted human serum and diluted human whole blood. (B) Various experimental process controls (anti-HFA1 and anti-HFA2 are capture and detection antibodies, respectively). (C) Stability of anti-HFA1-bound MTP stored at 4ºC in PBS (10 mM, pH 7.4) for 8 weeks. (D) Stability of anti-HFA1-bound MTP stored at 4 ºC for 4 weeks in the IA solution comprising of biotinylated anti-HFA2 preconjugated to SA-HRP. All experiments were done in triplicate with the error bars representing the standard deviation. Reproduced with permission from Elsevier Inc. 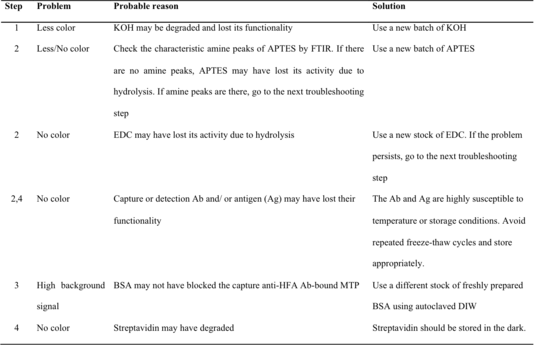 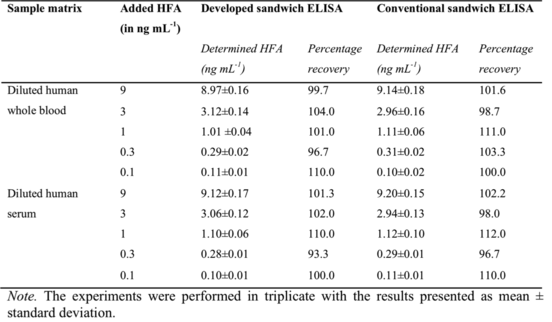 Determination of spiked HFA concentrations in diluted human blood by the developed and conventional sandwich ELISA procedures ^27°. Reproduced with permission from Elsevier Inc. 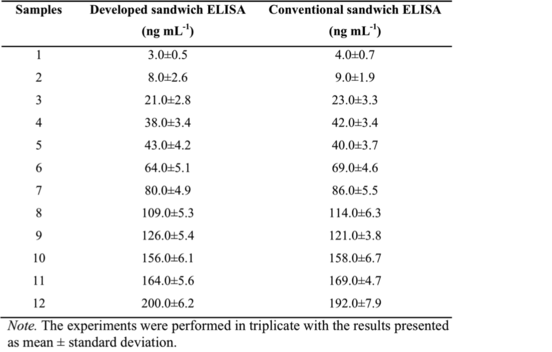 Determination of HFA in the EDTA plasma samples of patients based on the developed and conventional sandwich ELISA procedures (27). Reproduced with permission from Elsevier Inc.