This protocol describes a new procedure for the labelling of living retinas ex vivo, in order to image them by means of optical techniques, typically Confocal Laser Scanning Microscopy (CLSM). Several reports have addressed the immunohystochemical analysis of retina and of photoreceptors, mostly by inclusion or on previously fixed tissue (1), therefore with the exclusion of vital dyes. The retinal histoarchitecture has been evaluated by light microscopy of the inferior portion of the eye wall fixed and embedded in epoxy resin (2). The structure of isolated mammalian fixed retinas was also analysed by immunohystochemistry and CLSM (3,4). Our procedure maintains the physiological features of the tissue. Freshly enucleated bovine eyes are cut in half. The cornea, lens and vitreous are removed and discarded. The retina attached to the RPE is incubated into the eye semi-cup, in an appropriate reaction mixture, in dim light. A fluorescent dye (i.e. MitoTracker Deep Red 633) was added. Then, eyes or detached retinas are mounted for imaging. No other protocols are currently available to label living retinas still attached to the eyecup. By this technique we showed that rod outer segments and mitochondria are stained by MT and JC-1, out of a whole living retina (5).

It is advisable to work in sterile conditions and to add Ampicillin (100 μg/ml) and protease inhibitor cocktail to the sample. All solutions are prepared in Milli-Q® Biocel System water – Millipore.

It is also advisable to work in sterile conditions, as bacteria have similar dimensions, using an antibiotic, as Ampicillin (100 μg/ml) (Sigma-Aldrich, Cat no: 271861, http://www.sigmaaldrich.com).

Obtain freshly enucleated bovine eyes from a local slaughterhouse within 1.5 hr of animal death. Carry out all operations at room temperature.

The protocol takes 1hour, plus the time necessary for the CLSM imaging.

The new technique herein described was utilized to study retinas ex vivo. Incubation was conducted directly in eye-semicups containing retina, as above detailed, without tissue fixation utilizing classical mitochondrial vital probes. These lipophylic fluorescent dyes interact with actively respiring membranes and redistribute between compartments (8). For example, MitoTracker Deep Red 633 (MT) can be employed. MT is a photostable permeant cationic fluorescent mitochondrial probe (7), known to passively diffuse across the plasma membrane and accumulate permanently in mitochondria owing to their high membrane potential, without fluorescence quenching. Fig. 1 shows a Confocal Laser Scanning Microscopy (CLSM) maximum projection of MT fluorescence of a portion of a whole bovine living retina. Eye semi-cups from freshly detached bovine eyes, with the retinas still attached to the RPE, were filled with 6 ml of Mammalian Ringer containing 1 mM Glucose, 50 μg/ml Ampicillin, and protease inhibitor cocktail, and incubated for 10 min. Then MT was added to the solution and incubated for 15 more min, in the dark. Then retinas were withdrawn and mounted onto the glass slide in room light, for the CLSM measurements. Fig. 1 shows a portion of a whole retina with fluorescent rod OS still attached, imaged in perspective from their apical zone, as judged by the absence of mitochondria on the plane nearer to the objective. No other neuron of the retina was visible in the many other pictures acquired from the whole retinas imaged. Fluorescence appears to be distributed on the ROS, whose morphology allows unambiguous identification (9,10). As previously reported, ROS appear fluorescent in their distal tract (about 30 μm), i.e. a half of their length, which is 60 μm (9,10).

It was demonstrated that the mitochondria-specific interaction of the cationic dye utilized in this study depends on the presence of a high trans-membrane potential, like the proton gradient (Δμ(H+)) maintained by functional mitochondria across the inner membrane. In our experimental conditions, dissipation of membrane potential by treatment with mitochondrial poisons and uncouplers eliminated the selective association of MT Deep Red and JC-1 with both mitochondria and ROS (5). In mitochondria, membrane potential (Δψ) represents a sensitive parameter of the coupling of the mitochondrial bioenergetic function. The results shown in this paper would suggest the presence of an aerobic glucose metabolism in disk membranes, which could represent a mechanism for ATP supply in phototransduction. ROS are considered to be organelles devoid of mitochondria, site of anaerobic metabolism, even though glycolysis, present in ROS, was estimated insufficient to supply ATP for phototransduction (11).

An example of an experiment that required troubleshooting to obtain meaningful results is presented in Fig. 2. CLSM imaging was performed as in Fig. 1. Fig. 2, Panel A shows the fluorescence of a whole eye-semicup incubated with MT, from which the retina had been pulled away too early (for example with a pair of tweezers or after less than 10 min incubation with MR in the dark). OS were torn apart from their ellipsoid and remained immersed into the RPE: MT-labeled OS appear still immersed in the RPE, as judged by the visual perspective of the fluorescent OS. The residual retina, shown in Panel B, appeared devoid of OS in all of the multiple shots taken. By contrast, when the retinas are pulled away after at least 10 min of incubation with MR, all of the OS get out of the RPE, as shown in Fig. 3, that is a CLSM image of a whole eye semicup stained with MT, in which no OS are visible in all of the multiple images taken, as the retina was left to spontaneoulsy detach from RPE. In this case the eye-semicup is devoid of rods. The best way to extract retinas from eye-semicups in order to have an optimal yield in terms of the amount of OS is to let retinas detach from the RPE by incubating them in the semicup with MR for at least 10-15 min. It may be noted that, in general, when extracting retinas from mammalian eye-semicups it is advisable not to pull away the retina using a pair of tweezers, otherwise too many rods are left into the RPE and lost.

Considering the similarities among mammalian retinas (12), the protocol herein described may be also applied to the imaging of other mammalian or even human retinas or parts of them.

The above procedure may also be useful to study the function and the structure of retinal mitochondria, of the metabolism of 11-cis retinal whose autofluorescence can be imaged, and for labelling with many other kinds of fluorescent probes. Preliminary results also show the possibility to use fluorescent dyes that bear fixation to image retinas after a fixation step, conducted inside the eye-semicup immediately after the probe incubation, by substituting MR with a proper fixative, incubating for 30 min. Then fixed retinas can be imaged (Panfoli et al., unpublished results).

We thank Pietro Calissano (CNR and University of Roma, Italy) and Antonio de Flora (University of Genova, Italy) for their invaluable contribution. The work was supported by grants from Italian Ministry for research and Technology (MIUR). For A.D. and P.B. the work was granted by PRIN 2006-2006028909 / IFOM2007-2011. 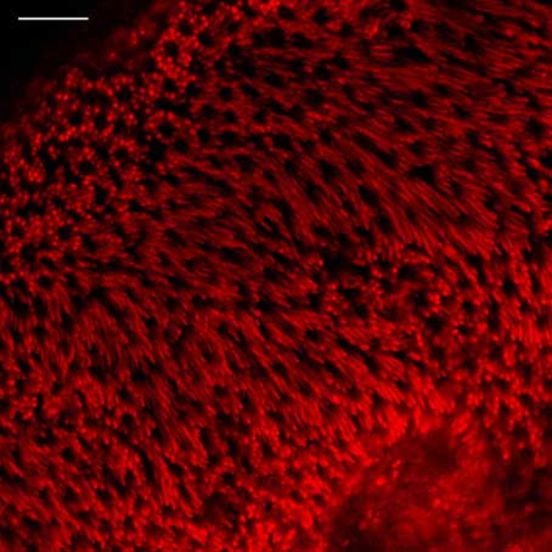 Figure 2: Confocal fluorescence image of a living eye-semicup and retina. 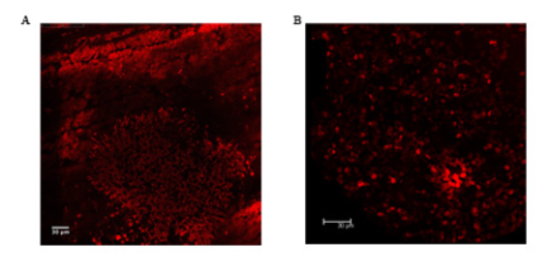 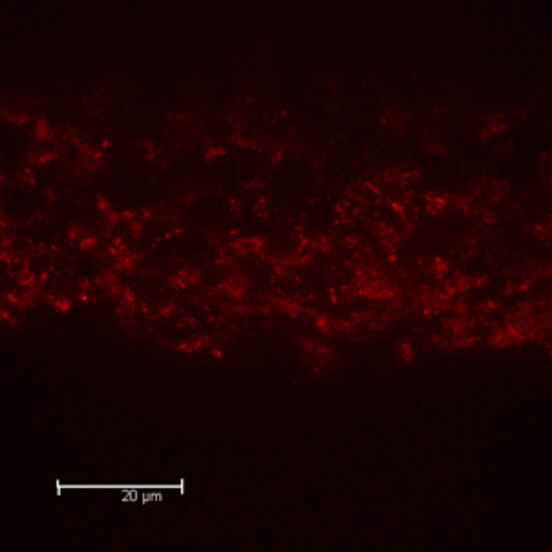 CLSM maximum projection image of serial confocal sections of a part of a bovine eye-semicup exposed to MitoTracker, after removal of the retina according to the present protocol. Image shows the fluorescence of the RPE mitochondria.